In wide pan, on medium heat, combine all ingredients except cilantro.  Stir frequently, cook about 10 minutes.

Add cilantro, mix well, and simmer vigorously for two minutes until most of the liquid is absorbed for an egg-like texture. 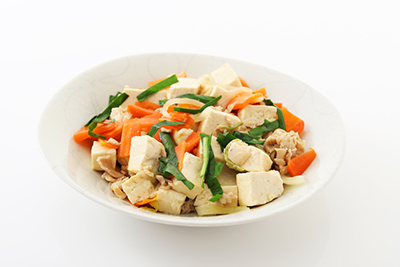 For IBS, cumin is a classic tonic. The ancient Hebrews and Egyptians used cumin as digestive aide, food preservative, and spice after discovering that the seeds of this drought-tolerant bush soothed the digestive system and helped prevent gas. Cumin has also been used in Traditional Chinese and Ayurvedic medicine to help soothe digestion and eliminate intestinal bloating, and used as a spice in culinary practices of the Indian Subcontinent and other Asian, African, and Latin American countries.

Cumin has anti-flatulent, peristalsis-stimulating effects. It is an excellent antispasmodic, and can be used to treat colic and IBS cramps. Cumin is extremely good for digestion and related problems. Its aroma, which comes from an organic compound called cuminaldehyde, activates the salivary glands in our mouth, which facilitates the primary digestion of food. Thymol stimulates the glands that secrete acids, bile, and enzymes responsible for complete digestion of the food in the stomach and the intestines. Cumin is also carminative, which means that it relieves gas troubles improving digestion and appetite. Due to its essential oils, magnesium, and sodium content, cumin promotes digestion and also gives relief from stomachaches when taken with hot water.

Researchers from the Middle East found that cumin extract can significantly reduce symptoms of IBS. The study followed 50 patients diagnosed with IBS using ROME II criteria. The patients had symptoms including severe abdominal pain, watery and irregular stools, painful elimination, abdominal pain, nausea, and other symptoms. More than half the patients had diarrhea-dominant IBS, and the rest had constipation-dominant IBS. After treatment with cumin essential oil, by the end of the four weeks, every one of the patients reported significant improvement in IBS symptoms. Both groups had improved bowel movement frequency, consistency, lack of mucous, and pain.1

For SIBO, cumin has been shown to protect the intestinal mucosa and suppress the growth of potentially harmful gut microbiota. Small intestine bacterial overgrowth (SIBO) is a chronic digestive ailment in which the number of naturally occurring intestinal bacteria multiplies significantly as a result of a lack of movement in the small intestine. Peristaltic action within the intestines ordinarily sweeps food wastes and excess bacteria toward the colon for excretion. When this mechanism fails or is insufficient, SIBO can result. SIBO may cause intestinal symptoms ranging from diarrhea and weight loss to anemia and malabsorption. It is even believed to cause or aggravate symptoms of IBS. 2

In animal studies,3 a spice mix containing the seeds of Nigella sativa (black cumin), a component of traditional dietaries in parts of Africa and South Asia, has been shown to protect the intestinal mucosa and suppress the growth of potentially harmful gut microbiota.

Menopause is helped by Tofu:

For MENOPAUSE, tofu provides soy which has been long known to reduce duration and frequency of hot flashes, night sweats, menopause-related insomnia, and to possibly ease vaginal dryness. Although soy does not contain estrogen, it has plant-based phytoestrogens which mimic estrogen and can bind to and stabilize estrogen that naturally occurs in the body. These isoflavones may also occupy estrogen receptors, so that the body ‘perceives’ more estrogen is present than there actually is, decreasing hormone fluctuations so low estrogen symptoms improve.

Although study results are not entirely consistent, many menopausal and post-menopausal health problems may result from a lack of isoflavones in the typical Western diet. Estrogen has been the most commonly prescribed treatment for hot flashes. However, a lot of women cannot take estrogen because of a history of breast cancer, and it also can cause irregular bleeding. Treatment of hot flashes with isoflavones does not give this side effect.1

Despite the controversy of soy-based supplements and their bioavailability, the North American Menopause Society issued a consensus statement2 in its journal agreeing that the best approach is to get isoflavones from consuming whole foods. Concern with supplementation versus food focuses on the whole soybean which contains about equal amounts of genistein and daidzein, and with smaller amounts of glycitein. The germ of the soybean is quite different with a higher concentration of isoflavones; with daidzein being about four times greater than that of genistein and with relatively high concentrations of glycitein. Some soy supplements are made from soy germ. The relative amounts of genistein and daidzein are now thought to be determinants of the therapeutic efficacy of soy.

Osteoporosis & Osteopenia are helped by Tofu:

For OSTEOPOROSIS & OSTEOPENIA, tofu provides soy-derived isoflavones, which help decrease inflammation, reduce bone loss, and increase bone mineral density. Isoflavones remain the subject of many scientific studies with most concurring that this plant-based estrogen (phytoestrogen) is beneficial because of its similarity in chemical structure to human estrogen. The most beneficial of the isoflavones are daidzein and genistein. Soy Isoflavones help in the preservation of the bone density.1 People in Asia who consume soy protein but not dairy products very rarely have osteoporosis, whereas in Europe and North America the contrary happens.

In the human body there is a constant process of breaking down and remaking of bones. The osteoclasts are cells which break down the bone, whereas osteoblasts build up bone. Isoflavones–specifically daidzein–inhibit the activity of osteoclasts, while stimulating the activity of osteoblasts. This moderate stimulus is sufficient enough to stimulate a continuous formation of bones. An animal study2 showed that isoflavones reduced bone loss and actually increased the bone mineral densities of long bones by up to 60%. A recent meta-analysis reviewed 5 studies about the effects of isoflavones on bone mineral density and bone turnover makers3 and concluded that soy isoflavones significantly increased the bone mineral density of the lumbar spine and moderately decreased urine deoxypyridinoline, a bone resorption marker.

It is commonly known that calcium can help prevent osteoporosis, and the soybeans in tofu are naturally rich in calcium, and it gets an extra kick from the gypsum (or calcium sulfate) that is used to change the milky cooked soybean liquid into curds. The more water that gets pressed out of the curds, the firmer it is and the more calcium it contains per cup, so firm tofu packs an astonishing 861mg per ½ cup serving.