Bake tempeh in a pre-heated 350 degree F oven, 10 minutes on each side.  Cut into long, thin slices.

With a slotted spoon, remove the celery spears and set aside.

Arrange tempeh and chicken in the center of a serving plate.  Surround with celery spears in a sunburst configuration.

Can be served with Beet-Ancho Sauce, a tofu sauce, Satay Sauce etc. 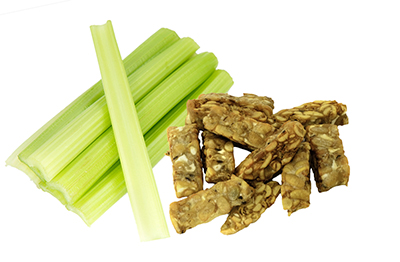 Asthma is helped by Celery:

For ASTHMA, celery acts as a lung tonic helping to reduce inflammation, dilate the air passages, and thin lung mucus. Its mild spicy flavor classically has an opening effect on airways. According to traditional Chinese five element medicine, celery is a Metal element food. Metal foods or herbs nourish the lungs and large intestine, so celery is a lung tonic. Modern research studies have found that the major underlying cause of asthma is a chronic inflammation and thickening of the bronchial tubes and nasal passages leading to dramatic muscle spasms, constriction of air passages, and breathing difficulties. Inhalers filled with steroids coat the walls of the lungs causing further respiratory problems and creating a vicious cycle of dependency.

An international study1, 3 of asthma and allergies involving more than a million kids found a consistent inverse relationship between prevalence rates of asthma and allergies, and the intake of fruits and vegetables. The thin lining of mucus that forms the interface between the respiratory tract and the external environment is our first line of defense against oxidative damage. Oxidative damage is important in asthma, contributing to airway contraction, excessive mucus production, and hypersensitivity. Antioxidants protect against oxidative stress, and our lung lining makes its own antioxidants, but needs the support of a diet rich in fruits and vegetables. With several phases of study, researchers came to the conclusion that manipulating antioxidant intake by increasing fruit and vegetable intake can powerfully reduce asthma exacerbation rates.

According to the National Institute of Health (NIH), asthma is defined as a chronic inflammatory disorder of the airways in which many cells and cellular elements play a role, in particular, mast cells, eosinophils, T-lymphocytes, neutrophils and epithelial cells. Asthma is caused by a very complex interaction between inflammatory cells and mediators.2 Their review concludes that ongoing research worldwide has provided valuable clues regarding the precise mechanism of action of herbal alternatives with interesting results in various target specific biological activities such as bronchodilation, mast cell stabilization, anti-anaphylactic, anti-inflammatory, anti-spasmodic, anti-allergic, immunomodulatory and inhibition of mediators viz., leukotrienes, lipoxygenase, cyclooxygenase, platelet activating, phosphodiesterase and cytokine, in the treatment of asthma.

The polyacetylene in celery offers amazing inflammatory relief for conditions like asthma and bronchitis. Celery also contains phthalides which are organic chemical compounds that help relax the muscle around arteries, dilating the vessels and allowing blood to flow normally lowering the level of stress hormones in your blood. These powerful anti-inflammatory agents also lessen excessive mucus production in air passages opening up airways.

Extensive clinical studies have been carried out on the chemistry of celery seeds and its essential oil which possesses compounds such as deltalimonene, selinene, and sesquiterpene alcohols plus a fixed oil that is composed of fatty acids, such as the petroselinic, the oleic and linoleic, the myristic, the stearic, and palmitic acids. The seeds of the celery are also associated with an anti-spasmodic effect, which may reduce the spasm of the tiny muscles around airways, known as bronchospasm.

Menopause is helped by Tempeh:

For MENOPAUSE, tempeh provides soy which has been long known to reduce duration and frequency of hot flashes, night sweats, menopause-related insomnia, and to possibly ease vaginal dryness. Although soy does not contain estrogen, it has plant-based phytoestrogens which mimic estrogen and can bind to and stabilize estrogen that naturally occurs in the body. These isoflavones may also occupy estrogen receptors, so that the body ‘perceives’ more estrogen is present than there actually is, decreasing hormone fluctuations so low estrogen symptoms improve.

Tempeh is a form of soy that has gone through a lengthy fermentation process that makes it digestion-friendly and results in a firm texture and with a nutty, mushroom-like flavor.

Due to fermentation, the resulting probiotics help nourish the gut and digestive flora, boosting digestion and the absorption of nutrients. Because the majority of the immune system resides in the intestinal tract, these beneficial soy products aid immune function, too. Soy that has gone through fermentation is lower in “anti-nutrient” substances that act as toxins, easier to digest, lower in phytates that prevent the absorption of minerals like calcium, magnesium, iron, and zinc, and high in vitamin K2, an important nutrient for supporting bone and cardiovascular health. All important benefits for perimenopausal or menopausal women.

Although study results are not entirely consistent, many menopausal and post-menopausal health problems may result from a lack of isoflavones in the typical Western diet. Estrogen has been the most commonly prescribed treatment for hot flashes. However, a lot of women cannot take estrogen because of a history of breast cancer, and it also can cause irregular bleeding. Treatment of hot flashes with isoflavones does not give this side effect.1

Despite the controversy of soy-based supplements and their bioavailability, the North American Menopause Society issued a consensus statement2 in its journal agreeing that the best approach is to get isoflavones from consuming whole foods. Concern with supplementation versus food focuses on the whole soybean which contains about equal amounts of genistein and daidzein, and with smaller amounts of glycitein. The germ of the soybean is quite different with a higher concentration of isoflavones; with daidzein being about four times greater than that of genistein and with relatively high concentrations of glycitein. Some soy supplements are made from soy germ. The relative amounts of genistein and daidzein are now thought to be determinants of the therapeutic efficacy of soy.

Osteoporosis & Osteopenia is helped by Tempeh:

For OSTEOPOROSIS & OSTEOPENIA, tempeh is a nutrient-dense, fermented soy product providing soy-derived isoflavones which help decrease inflammation, reduce bone loss, and increase bone mineral density. Isoflavones remain the subject of many scientific studies with most concurring that this plant-based estrogen (phytoestrogen) is beneficial because of its similarity in chemical structure to human estrogen. New research that looks at the current research in its entirety1 concludes that soya isoflavones can significantly reduce bone loss in the spine. The effects were more significant when more than 90 mg a day of isoflavones were consumed. Tofu, tempeh, soya milk, meat substitutes and soya flour are all good sources of isoflavones.

In the human body there is a constant process of breaking down and remaking of bones. The osteoclasts are cells which break down the bone, whereas osteoblasts build up bone. Isoflavones–specifically daidzein–inhibit the activity of osteoclasts, while stimulating the activity of osteoblasts. This moderate stimulus is sufficient enough to stimulate a continuous formation of bones. An animal study2 showed that isoflavones reduced bone loss and actually increased the bone mineral densities of long bones by up to 60%. A recent meta-analysis reviewed 5 studies about the effects of isoflavones on bone mineral density and bone turnover makers3 and concluded that soy isoflavones significantly increased the bone mineral density of the lumbar spine and moderately decreased urine deoxypyridinoline, a bone resorption marker.

It is commonly known that calcium can help prevent osteoporosis and tempeh is also a good dairy-free source of calcium which may help increase bone density and prevent bone loss. One cup or 166 grams of tempeh contains about 2/3 of the calcium found in one cup of whole milk.