Dry-roast seeds on stove-top in a cast iron pan or bake dry in the oven at 350 degrees F for 20 minutes.  Put seeds in bowl, have spoon handy.  Immediately, add tamari or Braggs to seeds, mix vigorously, stirring constantly as seeds steam and become dry. Cool and serve. 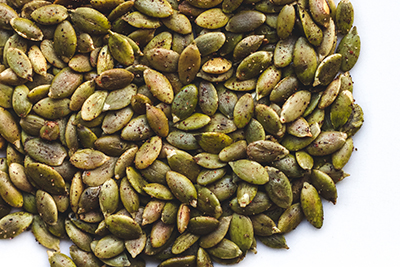 For ERECTILE DYSFUNCTION, LIBIDO, roasted pumpkin seeds are available year-round, and an easily accessible, inexpensive natural remedy for a lackluster libido. Often referred to as a “backyard” vegetable, the humble pumpkin and its seeds belong to the Cucurbitaceae family which also includes gourds, squash, cantaloupes, and cucumbers. Although high in calories, these come from high-quality protein and healthy, monounsaturated fatty acids (MUFAs). Pumpkin seeds are chock full of libido-boosting vitamins including the B vitamins and vitamins C, D, E, and K. They also contain many minerals like calcium, niacin, phosphorus, potassium and zinc.

Zinc in particular helps the body produce testosterone to improve sex drive and is also necessary for the production of healthy and abundant sperm. Human studies finally confirmed decades of animal studies showing that even moderate zinc deficiency plays an important role in modulating serum testosterone levels in normal men.1 Since the human body is unable to store this important nutrient, it must be eaten daily for an ongoing healthy sperm count.

Pumpkin seeds also contain plant-based omega-3 fatty acids which are the precursors to prostaglandins, hormone-like substances that are important for sexual health and desire. Myosin, another amino acid found in pumpkin seeds, is important in the signaling pathway to promote healthy smooth muscle contraction.2

Research is also focused on the importance in the pathophysiology of oxidative stress on arteriogenic erectile dysfunction.3 Since erectile dysfunction accumulates oxidative products in erectile tissue, antioxidant therapy may be a useful prophylactic tool for preventing smooth muscle dysfunction and fibrosis. Pumpkin seeds contain the oxidative stress-relieving giants carotenoids plus vitamin E in all of the following forms: alpha-tocopherol, gamma-tocopherol, delta-tocopherol, alpha-tocomonoenol, and gamma-tocomonoenol. These last two forms have only recently been discovered in pumpkin seeds, and their antioxidant health benefits are a topic of current research since their bioavailability might be greater than other forms of vitamin E.

For Prostate Enlargement, Benign, pumpkin seeds contain protective compounds called phytosterols and chemicals which may be responsible for shrinking the prostate and removing constriction of the urethra. More than half of U.S. men over age 50 have issues with an enlarged prostate causing discomfort and urinary problems. Eating pumpkin seeds is an old remedy making a comeback for scientific reasons.

Zinc is critical to normal prostate function and that walnut-sized organ actually has the highest levels of zinc in the body. One cup provides almost half the recommended daily allowance (RDA). Results of a 2011 study showed that malignant prostate tissue and prostate tissue from men with BPH had significantly less zinc than normal prostate tissue.3 The study also found an increase in urinary zinc excretion.

For SEASONAL DEPRESSION or SAD, tamari contain tryptophan along with many powerful antioxidants making it the most healthful of Asian soy sauces. The Japanese word tamari is derived from tamaru meaning “to accumulate” since it is the liquid which runs off of miso as it ferments and matures. The resulting sauce is thicker and darker than shoyu, which derives its flavor from natural alcohol produced during wheat fermentation. In contrast, tamari’s unique depth of flavor comes from an abundance of amino acids derived from fermented soy protein so it typically contains no wheat making it safe for those on a gluten-free diet. Tamari also contains much less salt than traditional soy sauce. It aids in the digestion of fruits and vegetables, and is a good source of vitamin B3, has over 30% more protein than your average soy sauce, manganese, and mood-enhancing tryptophan.

It has been estimated that 5-15% of the general population suffers from seasonal affective disorder (SAD). Since disturbances of serotonin metabolism have been implicated as part of the cause of SAD and tryptophan is the natural amino acid precursor in serotonin biosynthesis, it has been the focus of much research since the 1990s. Several studies have shown that control groups given L-tryptophan showed a reduction in SAD symptoms and in depression. One study showed that L-tryptophan may be an effective augmentation strategy for those patients with SAD who show limited or poor response to bright light therapy.1 Tryptophan has been of great interest in many mood disorders.2

Recommendation: 1-2 tsp. of tamari sauce added to meals more frequently during the fall and winter seasons.