Roast seeds in a 400°F oven for 15 minutes or until golden brown.  Set aside.

Put the chiles into a blender. Squeeze soft garlic cloves into the blender and add all the other ingredients.  Blend into a sauce, adding enough of the liquid in which the chiles were soaked to allow blender blades to turn.  Adjust seasonings. 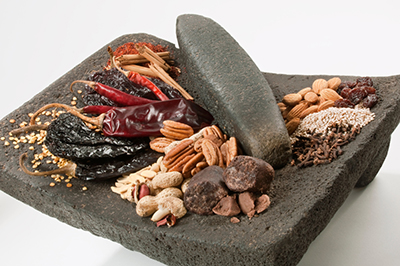 For ERECTILE DYSFUNCTION (ED), chiles and spicy foods in general play an important role in vascular function and blood pressure. According to the Mayo Clinic, the projected worldwide prevalence of ED is expected to exceed 322 million men by 2025. Since it is an indicator of poor vascular function, ED is considered to be an early marker for cardiovascular disease. The time between early onset ED and cardiovascular disease is typically 2-5 years. Right now is the time to address symptoms with a healthy diet.

Capsaicin is the pungent active ingredient in chili peppers and we’ve all seen someone who has eaten a fiery pepper become flushed and sweaty. That’s the blood flow-enhancing effects of capsaicin at work. Capsaicin promotes the body’s production of nitric oxide, which helps to relax blood vessels and optimize blood flow.

One randomized study divided 20 subjects into four groups. The two groups who received either capsaicin or papaverine (a poppy opium alkaloid antispasmodic drug) inserted into the urethra induced an erection.1 The study suggested the activation of a urethra-corpora cavernosa reflex arc but concluded that further studies were required to clarify if this arc is integrated at central nervous system level or is locally triggered.

For PMS, pumpkin seeds provide a number of beneficial nutrients to help combat its monthly symptoms. Irregular or painful periods are often due to excessive stress with resulting cortisol release, environmental toxicity, a poor diet including caffeine and alcohol, food sensitivities, and digestive issues. Rich in magnesium and manganese, nutrient-rich pumpkin seeds also add iron, fiber, zinc, and heart-healthy omega-3 fatty acids so they’re a natural to keep stocked in the kitchen pantry.

Researchers divided up PMS suffers into four different symptom classifications.1 Those whose PMS symptoms included craving for sweets, increased appetite, headache, and anxiety showed increased carbohydrate tolerance and low red-cell magnesium. Adequate magnesium replacement improved glucose tolerance tests and decreased their symptoms. If you’re plagued with headaches before or during your period, pumpkin seeds serve up 75% of the daily recommended amount of magnesium to relax blood vessels, which can alleviate a headache. Magnesium also helps regulate serotonin, one of the feel-good chemicals in your brain. Getting extra magnesium may help lift your mood, lessen anxiety, and reduce sugar binges.

Pumpkin seeds provide 85% of the daily recommended amount of manganese. This helps because manganese has been shown to reduce irritability and tension, and reduced water retention during the premenstrual phase lessening pain during the menstrual phase of the cycle.2

Pumpkin seeds are also known to be phytoestrogenic meaning they can add natural estrogen to the diet during the follicular phase of the cycle. One study showed that a diet of phytoestrogen-rich foods may relieve both physical and psychological symptoms of PMS.3 Balancing hormones naturally can be a great way to support your body without the side-effects of pharmaceuticals.

Recommendations: 1 ounce of pumpkin seeds per day; potentially for the first two weeks of your cycle, starting on the first say of your period for around 15 days.

For Prostate Enlargement, Benign, pumpkin seeds contain protective compounds called phytosterols and chemicals which may be responsible for shrinking the prostate and removing constriction of the urethra. More than half of U.S. men over age 50 have issues with an enlarged prostate causing discomfort and urinary problems. Eating pumpkin seeds is an old remedy making a comeback for scientific reasons.

Zinc is critical to normal prostate function and that walnut-sized organ actually has the highest levels of zinc in the body. One cup provides almost half the recommended daily allowance (RDA). Results of a 2011 study showed that malignant prostate tissue and prostate tissue from men with BPH had significantly less zinc than normal prostate tissue.3 The study also found an increase in urinary zinc excretion.

For RAYNAUD’S, chiles and spicy foods in general can help manage the occurrence and severity of its symptoms. Autoimmune diseases are affected by the foods we eat and research is confirming this long-held opinion and century’s old practice. There are two factors of Raynaud’s that influence the suggestion of warming foods. At the root of the problem is abnormal neurovascular reactivity and vasospastic nature of the disease where the nerves controlling blood flow become oversensitive and constricting diffuse arteries or smaller blood vessels of the extremities. There is the also the stress-related nature of the disease which can trigger symptoms.

Herbs and spices such as cinnamon, cayenne and mustard provide overall warmth to the body and dilate blood vessels and stimulate circulation.1 Capsaicin is the pungent active ingredient in chili peppers. Chiles and hot spices are classically recognized to improve blood flow through arteries and to enhance profusion in hands and feet. This effect can help prevent the first phase of Raynaud’s which involved spasm of arteries. Overall, eating hot spices regularly reduces the frequency and intensity of Raynaud’s symptoms.

Although we have promising animal research and are unsure how much the warming effect of capsaicin can help offset the symptoms of Raynaud’s, a study of hypertensive rats revealed that long-term dietary consumption of capsaicin could actually help blood vessels relax.2 It is believed that a special channel found in the lining of blood vessels increases nitric oxide production when activated. Gaseous nitric oxide molecules help to protect blood vessels from damage and inflammation.