Layer vegetables (beets, then yams, then carrots).  Add water to 1 inch above vegetables.  Cook covered on a low simmer until soft.

Meanwhile dissolve kuzu in 1/4 cup cold water.  Add kuzu to the soup.  Stir and simmer for 2 minutes until soup thickens. 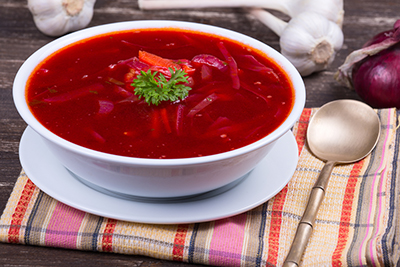 Inflammatory Arthritis is helped by Turmeric:

For INFLAMMATORY ARTHRITIS, turmeric has potent anti-inflammatory actions with an even stronger action than hydrocortisone, according to research studies1. It has been used for centuries in traditional Eastern diets warm, peppery flavor and valued for its medicinal properties in traditional Chinese medicine and Ayurveda for more than 5,000 years. Science has now demonstrated that turmeric and its main active constituent curcumin calms inflammation by reducing cytokine production from inflammatory leukocytes, and by greatly lessening the inflammation cascade. The compound has been shown to influence more than 700 genes, and can inhibit both the activity and the synthesis of cyclooxygenase-2 (COX2) and 5-lipooxygenase (5-LOX), as well as other enzymes that have been implicated in inflammation. Unlike aspirin or ibuprofen, turmeric’s curcumin reduces inflammation naturally, without damaging the liver or kidneys. Curcumin is also more strongly antioxidant than vitamin E

Curcumin’s anti-inflammatory effects help to reduce the symptoms of osteoarthritis. One recent study found that osteoarthritis patients who added 200 mg of curcumin a day to their treatment plan experienced reduced pain and increased mobility, whereas the control group, which received no curcumin, experienced no significant improvements2.

Other research also found that a turmeric extract composed of powerful antioxidant curcuminoids blocked inflammatory pathways, effectively preventing the launch of a protein that triggers swelling and pain. In vivo treatment prevented local activation of NF-κB and the subsequent expression of NF-κB–regulated genes mediating joint inflammation and destruction, including chemokines, cyclooxygenase 2, and RANKL. Consistent with these findings, inflammatory cell influx, joint levels of prostaglandin E2, and periarticular osteoclast formation were inhibited by turmeric extract treatment3.

Irritable Bowel Syndrome & SIBO are helped by Turmeric and Curry:

For IBS & SIBO, turmeric, curry, cumin, and coriander seed are all effective anti-spasmodics reducing bowel cramping and calming the smooth muscle lining the intestine. Each is also an effective flatulence remedy, helping with gas cramps. With better muscle activity, the growth of healthy bacteria is encouraged increasing the numbers of probiotics naturally prospering in the bowel. These “good bacteria” crowd out the unhelpful microbes that underlie small intestinal bacterial overgrowth, or SIBO. All these factors combined result in more beneficial microbes to enhance digestion, less gas or bad odor, fewer cramps, and stools that are easier to pass. Modern medicine has begun to recognize the importance of these natural plant products, as indicated by the over 3000 publications dealing with turmeric alone that came out within the last 25 years.

In a study of over 200 IBS volunteers given turmeric, IBS prevalence decreased significantly in both groups between screening and baseline (41% and 57%), with a further significant drop of 53% and 60% between baseline and after treatment. A post-study analysis revealed abdominal pain/discomfort score reduced significantly by 22% and 25%, and approximately two thirds of all subjects reported an improvement in symptoms after treatment, with a favorable shift in self-reported bowel pattern1.

Turmeric acts as a digestive stimulant enhancing the activities of pancreatic lipase, chymotrypsin, and amylase. Moreover, turmeric mixed with other spices such as coriander and cumin brought about a pronounced stimulation of bile flow and bile acid secretion2. Turmeric has local anesthetic action and after ingestion, secretion of gastrin hormone from the antrum of the stomach may be inhibited. Turmeric may possess local membrane-anesthetizing activity at the antrum of the stomach, which then inhibits secretion of gastrin and relieving bloating.

Turmeric is a choleretic, an agent that stimulates the liver to increase its production of bile which helps emulsify fats in the duodenum and increases peristalsis, the rhythmic contractions that move food through the gastrointestinal tract. Turmeric is also a cholagogue which stimulates the gallbladder and biliary duct to discharge bile and increase the body’s excretion of cholesterol. It supports healthy bile manufacture by the liver cells, enhancing healthy bile production by thinning the bile and allowing it to flow more freely from the liver into the bile ducts and then to the small intestine. Improving this important function of the digestive process could be responsible for improved IBS and SIBO symptoms.

Please note that some curry blends may contain chili, cayenne, or other hot spices which are discouraged with IBS.

Recommendation: ¼-½ tsp. turmeric per day; ⅛-¼ tsp. of both cumin and coriander per day.

Liver Protection is helped by Beets:

For LIVER PROTECTION beets are a classic and time-honored food for reducing the risk of damage to vulnerable liver cells from environmental pollutants providing anti-inflammatory, antioxidant, and detox support to the body. Beets contain betaine and are rich in calcium, iron, magnesium, vitamin C, potassium, manganese, phosphorous, as well as carotene and B complex.  Beets have long been used as a folk remedy for the liver, and this intuition has been supported by research showing that betaine is a lipotrope or something that prevents or reduces accumulation of fat in the liver. Betaine protects both the liver and gallbladder by supporting healthy bile flow. One hypothesis regarding the lipotropic properties of betaine is that it contains an electrophilic methyl group that ameliorates pathologic states induced by reductive and oxidative stress. Animal studies are very encouraging in its ability to prevent cirrhosis and mobilize hepatic cholesterol and phospholipids in rats fed a high-cholesterol diet1,2,3.

The role of bile is primarily that of facilitating fat digestion, but its importance to the entire digestive system should not be underrated. Toxins are excreted from the liver through bile fluid, when the flow is encouraged and enhanced, the liver can remove those toxins more effectively. Beets are cholagogues, a type of plant that enhances healthy bile production by thinning the bile and allowing it to flow more freely from the liver into the bile ducts and then to the small intestine, where bile is needed to emulsify fats into small globules for its absorption.

Recommendation: ½ to 1 beet per day.

Liver Protection is helped by Turmeric:

For LIVER PROTECTION, turmeric is very well-documented to provide antioxidant effects that reduce the risk of liver cell damage from dietary, endogenous, or environmental toxins. Turmeric held a place of honor in India’s traditional Ayurvedic medicine. A symbol of prosperity, it was considered a cleansing herb for the whole body. Medically, it was used as a digestive aid and treatment for fever, infections, dysentery, arthritis, and jaundice and other liver problems.

Turmeric encourages healthy new liver cell growth and liver tissue repair. A recent study is showing that the polyphenols in turmeric may be helpful for reducing the risk of fatty liver while decreasing stress at the cellular level. This study examined the effect of turmeric polyphenols on the livers of cows living under a great deal of stress in crowded feedlots. This stress causes physiological changes that impact the health of the liver in much the same way as stress impacts the human liver. It has been suggested that physiological stress of the endoplasmic reticulum in the liver contributes to fatty liver development, similar to a poor diet with excess consumption of refined sugars. Researchers saw a reduction in irritation markers plus a major stress hormone in the liver was significantly reduced in the cows fed a polyphenol mixture consisting of turmeric and green tea1.

This ability to combat oxidative stress was underscored in an animal study that showed turmeric as highly effective is reducing free radical damage from lead toxicity. The group receiving turmeric showed significant decrease in oxidative stress and increase in glutathione S-transferase, an enzyme your liver produces, which acts as the primary antioxidant2.

Tumeric has been found to improve liver detoxification in a controlled animal study. Once they were induced with hepatitis, the rats fed turmeric extract for 15 days were able to excrete toxins at a normal rate3.

Turmeric is a choleretic, an agent that stimulates the liver to increase its production of bile which helps emulsify fats in the duodenum and increases peristalsis, the rhythmic contractions that move food through the gastrointestinal tract. Turmeric is also a cholagogue which stimulates the gallbladder and biliary duct to discharge bile and increase the body’s excretion of cholesterol. It supports healthy bile manufacture by the liver cells, enhancing healthy bile production by thinning the bile and allowing it to flow more freely from the liver into the bile ducts and then to the small intestine.