Wash and dry the orange, and remove zest in fine shreds. Squeeze juice from orange, simmer uncovered in small pan with zest and cinnamon for 5 minutes. Set aside to cool. Wash berries and pat dry with non-bleached paper towel. Divide them into bowls, then top with orange sauce. 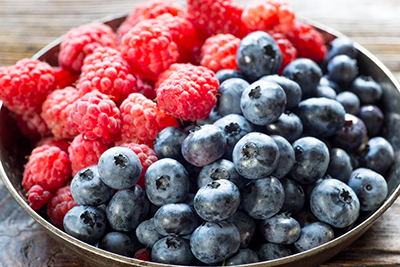 Cataracts are helped by Blueberries:

For CATARACTS, blueberries have a preventive role: Packed with antioxidant phytonutrients called anthocyanidins, blueberries neutralize free radical damage to the collagen matrix of cells and tissues that can lead to cataracts or glaucoma.

While there are no supplements that will reverse cataracts, eating more antioxidant-rich foods may reduce or slow the risk of cataract development and help maintain good eye health. Blueberries, blackberries, and raspberries contain high levels of beneficial antioxidants for eye health including two important vitamins for cataracts; vitamins C and E. Epidemiologic literature suggests that the risk of cataract can be diminished by diets that are optimized for these vitamins1.

Blueberries have long been considered a visionary fruit and during World War II British Air Force pilots regularly consumed bilberry preserves before their night missions. This habit was researched in numerous studies using extracts of bilberry (a cousin of blueberry) to evaluate claims of night time visual acuity2. This is thought to occur because of the anthocyanin in the berry’s blue pigment promotes quicker adjustment to darkness and faster restoration of visual acuity after exposure to glare3.

One study in Japan documented that blueberries helped ease eye fatigue4. Blueberry consumption increases circulation of the capillaries of the eyes, which reduces oxidation in these tissues so they are especially useful if you spend long periods staring at a computer screen. Not only do blueberries ease eye fatigue and help prevent cataracts, they are thought to be especially helpful in preventing age-related macular degeneration.

Diabetes Type 2 are helped by Blueberries:

A Canadian study has shown that blueberry extracts show promise as a complementary treatment therapy because of its anti-diabetic activity. They were able to show insulin and decreased blood glucose levels, while conferring protection against glucose toxicity. They further believe that the enhancement of proliferation in beta cells may represent another potential anti-diabetic property3.

Blueberry and blackcurrant extracts, which have the highest anthocyanin content, were the most effective inhibitors of alpha-glucosidase which lowers the rate of glucose absorption through delayed carbohydrate digestion and extended digestion time4.

Blueberry consumption increases circulation of the capillaries of the eyes, which reduces oxidation in these tissues6. This action is thought to be especially helpful in preventing diabetic retinopathy.

Diabetes Type 2 is helped by Cinnamon:

For DIABETES TYPE 2, cinnamon might improve insulin sensitivity. One study out of Pakistan states that cinnamon should be a part of diabetic diets due to its hypoglycemic effect1. Early researchers had discovered that certain spices like cinnamon, cloves, bay leaves, and turmeric displayed insulin potentiating activity. Later studies showed that the cinnamon bark constituent, methyl-hydroxy-chalcone polymer (MHCP) increased insulin-dependent glucose metabolism approximately 20-fold in vitro2. MHCP makes fat cells more responsive to insulin by activating the enzyme that causes insulin to bind to cells, mimicking insulin, and stimulating glucose metabolism. It also appears to work synergistically with insulin, possibly by improving insulin signaling pathways and alternative pathways that cause increased cellular glucose uptake.

A French study determined that cinnamon had an antioxidant effect on 22 people with impaired fasting glucose that are overweight or obese. Plasma MDA levels decreased in subjects receiving the cinnamon extract and effects were larger after 12 than 6 weeks. This study supports the hypothesis that the inclusion of water soluble cinnamon compounds in the diet could reduce risk factors associated with diabetes and cardiovascular disease3.

Tendonitis and Plantar Fasciitis are helped by Blueberries:

For TENDONITIS and PLANTAR FASCIITIS, blueberries have potent anti-inflammatory effects. Since this condition creates inflammation within the plantar fascia–the ligament that supports the arch of the foot–eating foods that reduce overall inflammation throughout the body is helpful. Blueberries contain large amounts of anthocyanins, the biologically active flavonoids or plant pigments that reduce connective tissue and joint inflammation.

Although anthocyanins have consistently shown an anti-inflammatory effect their mechanisms of action have only recently begun to be understood. Primarily, they effect the expression of several genes involved in inflammation which in turn results in downregulation of the inflammatory cascade1. Evidence suggests that their anti-inflammatory action can be attributed primarily to their antioxidant properties, which result in defense against cellular death due to oxidative conditions. Other studies show that blueberry juice also protects neurons from oxidative stress in the mitogen-activated protein kinase pathways an important finding for neurodegenerative diseases2.
Since the inflammation that causes plantar fasciitis can often become chronic, diet becomes even more important. The gastrointestinal tract is the first organ exposed to components of the diet and its functionality and integrity, and the complex relationship of its microbiota could have important implications for local and systemic health. Thus, the anthocyanins might promote intestinal colonization by specific groups of bacteria involved in the inflammatory process3. This effect may be related to the interplay between anthocyanins and the gut microbiota, which possibly results in improved activity of the intestinal barrier and reduced translocation of lipopolysaccharide (LPS) into the circulation. LPS is a gram-negative bacteria endotoxin located in the gut wall that can trigger a strong inflammatory response if released into circulation.

Varicose Veins are helped by Blueberries:

For VARICOSE VEINS, blueberries have several helpful actions including neutralizing enzymes that break down connective tissue. Varicosities form if there is weakness in blood-vessel walls or from significant pressure within the vein that overwhelms healthy vessels. Strengthening the vessel walls–which are made of a complex network of collagen, proteins, and smooth muscle–decreases the likelihood they will dilate or distend. The goal is to build up the structural matrix and to shrink existing varicose veins. Blueberries work their protective antioxidant magic with anthocyanins which inhibit enzymes from cleaving the collagen matrix, and directly cross-linking with collagen fibers to form a more stable collagen matrix1. This strengthening of the vessel wall integrity also helps reduce vein prominence.

Blueberries have also been found to have an anti-angiogenic3 effect which is the ability to reduce unwanted growth of blood vessels which can lead to varicose veins. Blueberries are so helpful with veins because they boost blood flow and are rich in Vitamin C. Vitamin C enhances anti-inflammatory bioflavonoids, which ultimately improve vein elasticity and increase blood flow in the legs.