Scrub vegetables with a vegetable fiber brush. Then, cut into 1-2 inch chunks. Place vegetables in a 3-quart dish.

Pour olive oil on hands and rub onto vegetables. Bake covered at 350 degrees F for 1 hour or until vegetables are soft. 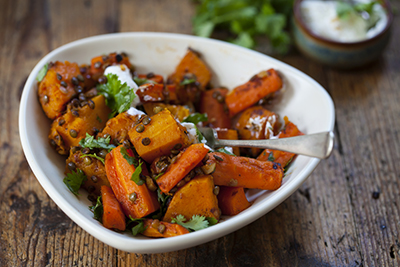 For FIBROCYSTIC BREASTS yellow/orange vegetables like winter squash is rich in beta-carotene which is vital to reducing the risk of the lumps that occur. It is estimated that as many as 40% of all women in North America have fibrocystic breast disease. Fibrocystic breasts arise from estrogen predominance and progesterone deficiency resulting in hyper-proliferation of connective tissue. Cysts are likely to develop in women ages 30 to 50, but the incidence of them occurring in younger women has increased dramatically in the past century and many experts agree that diets high in fat, especially those with meat and dairy products that are loaded with xenoestrogens, have a role in contributing to the formation of painful lumps.

A 5-year study sought to identify reproductive and dietary factors associated with benign proliferative mammary epithelial cell changes or fibrocystic breasts. It concluded that a diet rich in fruits and vegetables may have the protective effect of reducing cellular proliferation in the mammary epithelium.1

A recent study found that a reduced risk of proliferative and atypical breast lesions was associated with consumption of fruits and vegetables.2 Retinoid receptors in breast tissue modulate our genetic predisposition by decreasing the risk for both benign and malignant breast changes. Beta-carotene has similar anti-inflammatory effect as vitamin A without the potential side-effects of high dose vitamin A. Beta-carotene is the pigment that gives vegetables their deep yellow or bright orange hue.

Dietary fiber (both soluble and insoluble) and a wealth of nutrients are also plentiful in winter squash. Winter squash offers appreciable amounts of the B vitamins thiamin and vitamin B6, as well as of vitamin C, magnesium, potassium, and iron. Winter squash is also one of a handful of good low-fat sources of vitamin E. Studies of vitamin E demonstrate that it is useful in relieving breast pain and tenderness, although the mechanism of action is unclear.2

According to board certified breast thermographer Dr. Alexander Mostovoy, women with a history of constipation or irregular bowel movements are several times more likely to have cysts than those who have at least one bowel movement per day. It is important to point out that those who regularly consume a plant based diet excrete two to three times more detoxified estrogens than those who eat meat; carnivores thus tend to reabsorb excess estrogen through their intestinal wall.

Winter squash is also a very good source of fiber. With the goal of decreasing circulating estrogen levels within the body, fiber helps bind excess estrogen and speeds up its excretion.

Recommendation: 1 cup of winter squash at least 3 times per week when seasonally available.

Psoriasis is helped by Yellow/Orange Vegetables

For PSORIASIS yellow/orange vegetables like sweet potatoes and winter squash have been shown to reduce inflammation. Since psoriasis is a chronic autoimmune disease and intestinal permeability or leaky gut syndrome is very common in psoriasis patients, many individuals in our clinic have benefitted from following an anti-inflammatory diet to help reduce their symptoms. Some experts believe that psoriasis is actually caused by intestinal permeability and the body is seeking to eliminate the toxins through the skin in a desperate attempt to cleanse itself.

Dietary fiber (both soluble and insoluble) and a wealth of nutrients are also plentiful in sweet potatoes and winter squash and fiber is key to keeping your digestive system healthy, avoiding constipation, and offering natural detoxification. Winter squash offers appreciable amounts of the B vitamins thiamin and vitamin B6, as well as of vitamin C, magnesium, potassium, and iron.1,2

The carotenoids so plentiful in these orange-hued vegetables has a similar anti-inflammatory effect as vitamin A without the potential side-effects of high dose vitamin A. Beta-carotene is the pigment that gives vegetables their deep yellow or bright orange hue and vitamin A is critical for skin healing.

The deep coloring signals that winter squash is more nutritious and richer in complex carbohydrates than summer squash. Pumpkin and butternut squash offer outstanding amounts of beta-carotene with one cup of pumpkin containing 7.8 milligrams of beta-carotene and 1 cup of cooked butternut squash supplying 10 milligrams. Sweet potatoes shine with 22.6 milligrams per a 100-gram serving. According to a study published in the American Journal of Clinical Nutrition, orange-fleshed sweet potatoes contain so much beta-carotene that they could be used as an effective long-term strategy for controlling vitamin A deficiency in developing countries.

For STRESS, ADRENAL DEPLETION, yellow/orange vegetables like yams and sweet potatoes are a classic adrenal support food with their richly-flavored orange flesh. In both Five Seasons (macrobiotic) and Five Element teachings derived from traditional Eastern medicine, sweet root vegetables including yams are classified as Earth foods when there is great abundance of hardier foods and life seems to balance. A hearty squash soup or casserole is grounding and replenishing when the adrenal glands have been taxed to release a large or persistent amount of cortisol and other stress-managing hormones.

Adrenal glands play a huge role in stress response to the brain’s message of a perceived trigger–whether it is environmental pollutants, processed food, or life’s boundless pressures. The adrenal medulla releases adrenaline hormones like cortisol to react to the physical or mental threat–the fight-or-flight response–rushing blood to your brain, heart and muscles. The adrenal cortex then releases corticosteroids to dampen processes like digestion, immune system response, and other functions not necessary for immediate survival.

In a healthy state, adrenals adjust your metabolism to maintain an optimum weight. Common examples of cortisol disruption include weight gain when starting college, getting married, traumatic illness, shifting to a more stressful job, becoming a parent, or undergoing hormonal changes later in life.

Adding unrefined, low-glycemic carbohydrates like yams helps the body overcome adrenal insufficiency. The Ancient Chinese divided the world into five vibrational elements of Water, Wood, Fire, Earth and Metal. These Five Elements are the roots of Traditional Eastern Medicine which in turn represent the five major organs necessary for survival: kidneys, liver, heart, the spleen/stomach/pancreas, and the lungs. It is important to balance these elements within and without for optimum health.  Learning to balance through food helps ensure that you receive enough nutrients from what you eat to support the corresponding organs. Winter squash is categorized as an Earth element along with other sweet and starchy foods, particularly yellow, orange, brown foods and root vegetables.

Our clinical experience with many patients supports Traditional Eastern Medicine and we find that foods in the Earth category slow down acute symptoms and neutralize toxins supporting adrenal function and reducing stress.