Simmer the almonds, pistachios and dates in 2-1/2 cups filtered water for 10 minutes.  Or soak them for 6+ hours in cool water.

Steam or pressure-cook the rices together in 4 cups salted water for 45 minutes or until the water is absorbed.

In a blender, puree the nut mixture with the spices, vanilla, orange zest, black pepper, and any of the optional ingredients desired. Add enough water so that the blender blades will turn.

Fill a 3 quart baking dish with approximately 2-1/2 cups cooked rice, the nut puree (+/- a small amount of water to rinse blender), the banana and optional pistachios.  Mix well.  Bake covered for 1+ hour at 300°F (or 250°F for 2 hours) removing lid last 10 minutes so the top lifts up and is browned.  Garnish with sprinkles of orange zest. 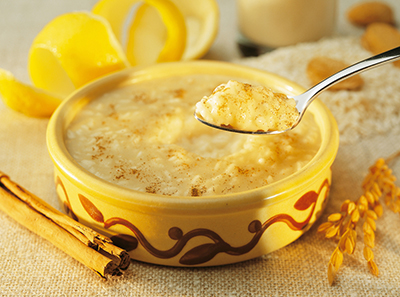 COPD and Bronchitis are helped by Almonds

For COPD and Bronchitis, almonds are an important part of Ancient Chinese and macrobiotic sciences which divide life into five elements corresponding to five major organs necessary to survival, and then to foods that are particularly nourishing for our bodies. Almonds are a metal element and used to relieve stagnant energy in the lungs by transforming phlegm.

Almonds contain L-arginine which is an essential amino acid normally made by the body and found in many foods that have protein. Arginine becomes nitric oxide, a blood vessel vasodilator, in the body and evidence suggests that arginine may help treat medical conditions that improve with increased vasodilation like chronic obstructive pulmonary disease (COPD). A recent 2017 study1 backed up this ancient medicinal theory by testing the effect of systemic infusion on renal vascular control which is important in the pathogenesis of COPD. Although it confirmed an increase in renal blood flow, the study did suggest further research into the abnormal response of hypoxic patients to the L-arginine-nitric oxide pathway.

Researchers are currently focused on arginine methylation and potential genetic defects that may illuminate the contribution of this process in lung homeostasis and chronic lung disease.2 Dysregulated arginine methylation has now been shown to contribute to the pathogenesis of several pulmonary disorders, in experimental animal models as well as human disease. Until a novel therapeutic option is available, adding almonds to your diet is a natural way to add protein and this essential amino acid to your system.

COPD and Bronchitis are helped by Rice

For COPD and Bronchitis, rice is an important part of macrobiotic science and Ancient Chinese medicine which divides life into five elements corresponding to five major organs necessary for survival, and then to foods that are particularly nourishing for our bodies. This recipe contains two rice varieties and amasake which is a nutritious, fermented rice beverage that adds a mellow and elegant flavor to this recipe. Rice is a metal element and a classic grain used in Eastern medicine to overcome a phlegm or dry a damp condition.

The Ancient Chinese divided the world into five vibrational elements of Water, Wood, Fire, Earth and Metal. These Five Elements are the roots of Traditional Eastern Medicine which in turn represent the five major organs necessary for survival: kidneys, liver, heart, the spleen/stomach/pancreas, and the lungs. It is important to balance these elements within and without for optimum health.  Learning to balance through food helps ensure that you receive enough nutrients from what you eat to support the corresponding organs.

There are several ingredients in this recipe including banana and almonds that serve to nourish the white or metal elements of Chinese cooking for health. Pungent metal foods are considered warming and encourage energy to expand (relieving stagnant qi of the lungs) and move outward (transforming phlegm). Metal element foods.

Our clinical experience with many patients supports Traditional Eastern Medicine and we find that foods in the Metal category nourish the lungs and large intestine, and are considered to be strengthening in the fall season when lung disorders can be aggravated by the weather.

For Crohn’s & Ulcerative Colitis (IBD), cardamom has digestive, antispasmodic, anti-inflammatory, and anti-microbial properties. It boosts digestion and stops nausea, vomiting, and flatulence. Known as the ‘queen of spices’ in its ancient birthplace of India, this expensive spice comes from the seeds of a perennial plant, Elettaria cardamomum, and was used by ancient Greeks and Romans in medicines. This therapeutic herb has antioxidant properties which increase the levels of glutathione that can aid in detoxification and benefit the immune system as well. Some other health benefits of cardamom include relief from stomach pain and colon spasms offering soothing relief from the cramping associated with IBD. Various natural products have been shown1 to safely suppress pro-inflammatory pathway and control IBD. In vivo and/or in vitro studies2 indicate that anti-IBD effects of natural products occur by reduction of pro-inflammatory interleukin (IL)-6 or tumor necrosis factor (TNF)-alpha production, enhancement of anti-inflammatory IL-10 production, or reduction of cyclooxygenase-2 or nitric oxide (NO) synthase expression. Cardamom is one of the spices profiled in this study.

The various chemical composition of the spice and its pharmacological uses are explained in this 2011 study.3 Cardamom’s gastroprotective activity inhibited ulcers; its antispasmodic action is produced through muscarinic receptor blockage; and it increases the level of glutathione which is a natural antioxidant.

Recommendations: 1 tsp. of cardamom per day.

For Crohn’s & Ulcerative Colitis (IBD), cinnamon has antimicrobial, anti-inflammatory, and antispasmodic properties offer soothing relief from the cramping associated with IBD. It is also a great source of antioxidants. Soft, low-fiber, bland diets are often recommended while in a flare; it’s helpful to know that this common spice can add soothing flavor with added benefits. Although patients have self-reported noticing improvement in their symptoms for several years, a great deal of recent research now validates their use of cinnamon and improvement of symptoms. A 2016 study found that cinnamon extract has an anti-inflammatory effect on mast cells,1 white blood cells or “master regulators” of the immune system. The mice in this experiment were treated with cinnamon and their symptoms of colitis, infiltration of immune cells, tissue damage, and bowel wall thickness in colon tissue were diminished significantly.

An additional study assessed the potential anti-inflammatory action of cinnamon extracts in a cellular model of intestinal inflammation.2 They discovered decreases in tight junction permeability, and most importantly, levels of inflammatory cytokines, namely nitrite (NO), PGE2, interleukin (IL)-6, IL-8, and TNF-α. They summarized their findings with this statement, “These results show that cinnamon may serve as a probable agent for the development of functional supplements for maintenance of gastrointestinal health.” This is a pretty strong endorsement for adding this spice to a daily diet.

Insomnia is helped by Rice

For INSOMNIA, a whole grain like brown rice, unlike refined grains, is a rich source of the amino acid GABA, an important inhibiting neurotransmitter which promotes sleep.1 A whole grain retains all three original parts: the bran, germ, and endosperm and in brown rice that leaves it rich in potassium, magnesium, and calcium which are also important for normal neurotransmitter functioning and sleep. Foods contain phytochemicals that are as equally effective as drugs or supplements.

Magnesium closes calcium channels of nerve cells for a calming effect on the central nervous system. Outside the brain, it relaxes the muscles. Brown rice also contains L-tryptophan, an essential amino acid, that plays multiple roles in brain chemistry can increase the production of niacin, serotonin and melatonin. Melatonin is produced from tryptophan with serotonin as an intermediary. Serotonin improves mood so it can help promote sleep by relieving depression.

Nutrient-dense complex carbohydrates are filling foods that help you sleep without raising calories. It has the added advantage of also being low-glycemic which means a more stable glucose level and does not cause insomnia through glucose-fueled highs and sugar crashes.

A 2007 study in the American Journal of Clinical Nutrition2 found that consuming basmati rice four hours before bedtime cut the amount of time it took to fall asleep in half when compared with eating a high-glycemic-index meal at the same time interval. The authors speculate that high-glycemic-index meals may up the production of tryptophan. Rice that ranks high on the glycemic index, meaning the body digests it slowly, releases glucose more gradually into the bloodstream.

Rice is one of the most easily-digested grains which is why rice cereal is often recommended as a baby’s ﬁrst solid. Maybe by adding it to your diet, you’ll sleep like a baby, as well!

Recommendations: ¼ cup of cooked brown rice at dinner or before bedtime.