PMS is helped by S-adenosyl-methionine (SAMe)

For PMS, SAMe reduces muscle and connective tissue pain, and also depression that affects women pre-menstrually. The superior effectiveness of SAMe for mood disorders and depression and pain in various conditions including PMS is well-studied and documented. 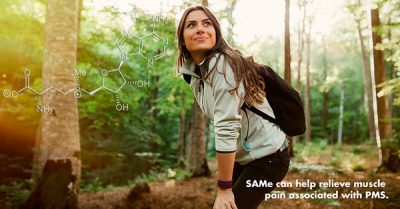 SAMe is an amino acid derivative that occurs naturally in the human body. It is involved a cellular process known as methylation that is critical for the body’s manufacture of brain chemicals, including monoamines, neurotransmitters, and phosphatidylserine. The methylation cycle is important because it takes nutrients from food and supplements to make the energy our bodies need for daily metabolism. If one process is faulty, it influences the next like a domino effect. When the cycle breaks, it affects our moods, energy and overall physiological function. A number of neurotransmitters, fatty acids, phospholipids, and other chemicals must accept methyl groups from SAMe to become active. Often the brain can produce all the SAMe it needs, but patients who are depressed or in pain often cannot make enough of their own, and thus their methylation functions are lacking.

The more we learn about methylation and genetics, the more intriguing the current research becomes as it relates to novel therapies for PMS. Realizing that SAMe has been shown to lower lipopolysaccharide (LPS)-induced expression of the inflammation-causing, or pro-inflammatory, cytokine TNF-α and increase the expression of the anti-inflammatory cytokine IL-10 in macrophages, a 2014 study sought to assess whether epigenetic mechanisms mediate the anti-inflammatory effects of SAMe. Their data indicated that SAMe modulates the expression of inflammatory genes in association with changes in specific gene promoter DNA methylation; a complex way of stating that the helpful role of SAMe supplementation in the methylation cycle and its influence on calming inflammation bears much more attention.2

SAMe is well-studied for its role in hormone-related and other types of depression, and has been shown to be effective. A 1990s study was undertaken to assess postpartum psychological distress in 190 women using SAMe to alleviate anxiety, depression, somatic symptoms, and hostility. This two-phase epidemiologic investigation noted progressive improvement throughout the duration of the 30-day study and concluded that SAMe was an effective treatment for reducing or relieving the signs and symptoms of physical and psychological distress.3 Many clinical studies show that taking SAMe can be as effective as pharmaceutical selective serotonin reuptake inhibitors, commonly known as SSRIs, for major depressive disorder.4

SAMe is a very unstable compound that is highly hygroscopic, meaning that it absorbs moisture from the air which could denature it. Many SAMe supplements that we shun attempt to keep SAMe stable in coated tablets that include shellacs, waxes, and plastics containing phthalates, which are known endocrine disruptors. In our clinic, we want only a pure formulation with calcium and magnesium chelates to keep SAMe stable without unhealthy additives. Furthermore, we prefer a SAMe formula that includes cofactors, the necessary amounts of 500mcg vitamin B12, and 200mg folic acid in the right proportions for SAMe to work. These cofactors are required with SAMe for the methylation functions and sulfur-reactions that bring mood, nervous system, joint and liver benefits. We also want a formula that includes 2-3mg vitamin B6 to ensure that SAMe is efficiently cleared and to prevent homocysteine elevations.

Recommendations:
200-400mg of SAMe daily between meals, or as directed by your healthcare provider.