PMS is helped by Melatonin

For PMS, melatonin helps relieve depression and premenstrual insomnia by enhancing the action of hormones and boosting the calming neurotransmitters. Melatonin is low in women with PMS, and especially in premenstrual dysphoric disorder (PMDD) which includes severe symptoms of depression, tension, and irritability for 1 to 2 weeks before periods. Research found that women with PMDD have lower night time melatonin levels in general, and these drop even further in the premenstrual week.

Melatonin is an indole neuro-hormone, meaning it functions like a hormone and a neurotransmitter, and is naturally produced in the brain by the pea-sized pineal gland. The ancient Greeks viewed the pineal gland as the seat of the soul; now it seems its only function is melatonin production. The synthesis and release of melatonin in the body surges with darkness and is suppressed by light. 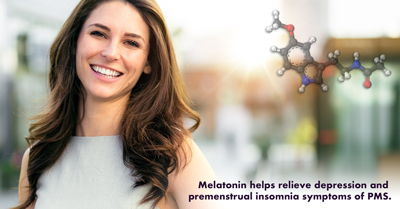 Melatonin acts on MT-melatonin receptors in the hypothalamus, the site of the body’s master circadian clock, to regulate sleep-wake cycles and circadian rhythm. This rhythm synchronizes the secretion of many other hormones, adrenal activity, and the daily rhythm of blood pressure regulation, ovarian physiology, and immune function. In addition, melatonin also works by enhancing the effects of gamma-amino butyric acid (GABA), a calming neurotransmitter, and thus lifting premenstrual mood.

Circadian rhythm disturbance can lead to an increased disruption of menstrual cycle function. Women with ovulatory menstrual cycles have a circadian rhythm superimposed on the menstrual-associated rhythm; in turn, menstrual hormone rhythms and cycles affect the circadian rhythm. Female shift workers compared to non-shift workers are more likely to report menstrual irregularity and longer menstrual cycles, for example.1 This is likely occurring through the connection of melatonin to both serotonin and estrogen. Melatonin has been found to be a potent modulator of estrogen by decreasing its receptor binding ability.4 Melatonin is also a product of serotonin, a neurotransmitter that, when its levels are effectively increased, is a known treatment for PMS and PMDD. Subjective sleep quality is lowest around menses, but the timing and composition of sleep remains relatively stable across the menstrual cycle in healthy women.

We prefer doses of 3mg capsules of melatonin, in a non-allergenic base such as leucine, an amino acid, which helps with steady, gradual, even absorption. Our PMS patients have found this formulation to be well-absorbed and long-acting. We’ve seen many patients gain deeper, more sustained sleep that lasts for up to 8 hours, and receive good relief from PMS symptoms, better than with shorter-acting melatonin formulations we’d tried in a mineral base.

Recommendations:
3-6mg nightly, or as directed by your healthcare provider.