PMS is helped by Calcium Citrate

Although most of us are familiar with how essential calcium is for our bones, many of our patients are not as familiar with the fact that their bodies need precise amounts of calcium to keep nerves, muscles, heart, blood clotting, and every cell functioning normally. Since calcium is required for muscle activity, calcium citrate helps to relieve PMS symptoms by ensuring proper muscle function. Adequate calcium levels help to ensure that uterine and blood vessel musculature can move to their full capacity, thus clearing out metabolic waste products and toxins, and allowing cells to function at their best. Another way it can work is by ensuring proper mineral balance within the tissue space and thus decreasing symptoms of bloating. 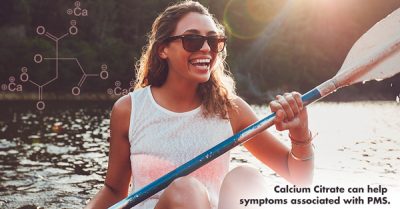 In a 2018 double-blind, randomized clinical trial, female students in Iran were treated with calcium or a placebo and those receiving the mineral saw significant differences in symptoms of anxiety, depression, emotional changes, water retention, and somatic (sleep) changes.2 Research reveals that levels of calcium and some trace elements in red blood cells were lower than normal in women with PMS and that calcium correlates with the production of serotonin and tryptophan metabolism.3 For PMS-induced depression, or premenstrual dysphoric disorder (PMDD), first-line therapy often includes a pharmaceutical selective serotonin reuptake inhibitor, commonly known as an SSRI. The SSRI medications effectively raise the amount of serotonin that the body perceives is present. The good news is that taking a natural supplement of calcium citrate can produce a similar effect. Calcium citrate supplements taken for relief of the physical and emotional symptoms that plague women in their menstrual years appears to be an attractive alternative to and current pharmaceutical treatments with their documented side-effects.

In the scientific literature, there is a link between low calcium intake and symptoms of PMS. Taking calcium daily seems to significantly reduce depressed mood, water retention, and pain associated with PMS, especially in women with inadequate daily calcium intake. Calcium taken at 800-1000 mg daily was shown to decrease PMS symptom scores by about 18% compared to placebo. Taking calcium 400 mg daily for 3 months was also shown to improve PMS symptoms in about 40% more women with mild to moderate PMS compared to placebo. Women consuming an average of 800mg or more of calcium per day seem to have about a 30% lower risk of developing PMS compared to women whose intake is below 500 mg daily.

The prevalence of women who report feeling symptoms of PMS is staggering, and our clinic has found that this can be as high as 90% of the population of women in their childbearing years. PMS typically affects women during the two weeks before their menses. This time from ovulation to the start of the monthly period is called the Luteal Phase. Symptoms vary from headaches, irritability, mood swings, and fluid retention, to premenstrual dysphoric disorder, or PMDD, which is now included in the Diagnostic and Statistical Manual of Mental Disorders. These symptoms can threaten relationships, work life, and well-being, and since the symptoms are cyclical it would appear that hormones are an obvious trigger. Researchers are also looking at the role of genetics and environmental factors such as diet, exercise, stress and exposure to toxins. If you are suffering from PMS, calcium is especially needed on a daily basis, and the citrate or chelate form is usually the best absorbed.

Recommendations:
500-750 mg calcium citrate daily, or as directed by your healthcare provider.