Menstrual Cramps are helped by Ginkgo Extract with whole leaf

For MENSTRUAL CRAMPS, ginkgo biloba strengthens blood vessels and improves their muscle tone, therefore increasing blood flow to organs, and providing sustained relief from cramping. Ginkgo’s ability to enhance blood flow to organs and limbs makes it a valuable remedy for menstrual pain. Various factors can reduce blood flow to and from the uterus, including poor nutritional status, an inflammatory diet, and a sedentary lifestyle. If the vessels that transport blood to and from the uterus are constricted and narrowed, the supply of nutrients to the uterus can be reduced, and the removal of metabolic waste products can be sluggish. Poor nutritional status and waste product buildup at the cellular level can leave the uterine musculature cramped and unable to relax. 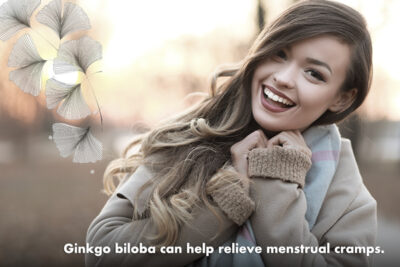 A study published in the August 2009 issue of the “Journal of Alternative and Complementary Medicine” investigated the benefits of ginkgo biloba for women with dysmenorrhea or menstrual cramping, as well as premenstrual syndrome and pain. In the study, participants who took ginkgo supplements three times daily from the 16th day of their menstrual cycle until the fifth day of the next cycle reported relief of their cramps. This was a single-blind, randomized, placebo-controlled trial of 85 medical university students. After the ginkgo intervention, there was a significant decrease in the overall severity of painful cramping in the ginkgo test group versus the placebo.1

Gingko can also improve the symptoms of menstrual cramps by relieving depression, in addition to relieving pain by improving blood flow. Depression and depressive symptoms have long been associated with severe menstrual cramping. Several studies have shown that ginkgo can ease depression, with scores on the Hamilton Depression Scale dropping from 14 to 4.5 on average. A recent 2018 study testing the flavonoids and terpenoids of Ginkgo biloba extract found good therapeutic potential for the treatment of major depressive disorder by exerting a neuroprotective effect: definitely helpful for the distress that accompanies menstrual pain.2

Ginkgo, one of the oldest living tree species on Earth, is a beautiful tree with fan-shaped green leaves, and was first used medicinally in China around 2,800 B.C. as a brain tonic. It is now known to be an antioxidant that protects nerves and cells from oxidative damage, while it also enhances energy production within cells even if the oxygen supply is lowered. Ginkgo can help menstrual cramps because it relieves congestive symptoms such as breast tenderness and the cramping due to inflammation. A 1993 study of 165 patients concluded that both congestive and neuropsychological symptoms during painful periods improved after treatment with ginkgo biloba extract.4

Recommendation: Ginkgo biloba 160mg, ideally with 24% flavone glycosides, 6% terpene lactones, and including some ginkgo whole leaf for trace nutrients, 2-3 times daily, best between meals; or as directed by your healthcare provider.