Menstrual Cramps are helped by Ginger

For MENSTRUAL CRAMPS, ginger has potent pain-relieving effects for more than 60% of women with period pains. It effectively eases muscle cramping, enhances pelvic circulation, calms the underlying inflammatory process, and thus reduces pain. Ginger root is a powerful natural medicine, but it needs to be strong enough to be useful. Standardized concentrates should contain a total of 20-25mg per dose of ginger’s key active compounds including gingerols and shogaols. 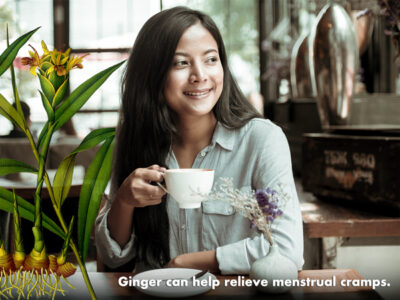 Known formally as Zingiber officinalis in botanical medicine, ginger has been used medicinally for thousands of years in eastern and Ayurvedic medicine as a natural pain reliever and anti-inflammatory food and as a spice. It is a small, leafy plant that originated in China, other parts of Asia, West Africa, the Caribbean and India; the part of the ginger plant that is consumed is the root.

Clinical research shows that ginger can reduce pain in women with dysmenorrhea, in placebo-controlled trials. Multiple studies have confirmed the effectiveness of ginger at a variety of doses and dose schedules. When dose ranges from 500-2000mg (with 5% active ingredients) daily for the first 3-4 days of the menstrual cycle, meta-analyses find an overall decrease in pain of 2.3 to 2.6 points on a 10-point scale. Ginger can actually be as effective as non-steroidal anti-inflammatories (NSAIDs) when 20-25mg of ginger’s active compounds including gingerols and shogaols are taken two to four times a day at the beginning of the menstrual cycle.3

Ginger’s ability to relieve pain partly derives from its anti-inflammatory actions, which can lower the types of prostaglandins which exacerbate cramps. Also, by reducing inflammation and allowing blood vessels to expand, ginger thereby improves nutrient flow into the uterine tissue and speeds removal of metabolic waste. In addition, the analgesic properties of ginger likely act to reduce the perception of pain.

Ginger’s pungent flavor is due to volatile oils, including a mixture of shogaols and gingerols. Gingerols increase healthy motility of the uterus and other muscular tissues including the gastrointestinal tract, and they have analgesic, sedative, digestive, antipyretic, anti-inflammatory and antibacterial properties. Among these many actions, it is the analgesic and anti-inflammatory qualities of ginger that are so valuable to those who suffer from menstrual cramps.

Multiple cell culture studies show that ginger has anti-inflammatory action by inhibiting prostaglandin and leukotriene synthesis as well as pro-inflammatory cytokines such as IL-1, TNF-α, and IL-8 all of which are proteins that are usually elevated with inflammation arising from anything from diabetes to arthritis. All of these actions can help reduce menstrual pain. Odense University in Denmark has conducted extensive, world-renowned research into the pain-relieving effects of ginger. Their research on the therapeutic effects of ginger given daily for three months resulted in significant improvements in pain and swelling superior to non-steroidal anti-inflammatory drugs (NSAIDs) as NSAIDs only work to block the formation of inflammatory compounds. Ginger, however, blocks the formation of inflammatory compounds including prostaglandins and leukotrienes, and its antioxidant effect breaks down existing inflammation and acidity.1

The discovery that ginger shares pharmacological properties with non-steroidal, anti-inflammatory drugs was investigated in this abstract. Ginger suppresses prostaglandin synthesis through inhibition of cyclooxygenase-1 and cyclooxygenase-2. More importantly, it was observed that ginger also suppresses leukotriene biosynthesis by inhibiting 5-lipoxygenase and this pharmacological property distinguishes ginger from nonsteroidal anti-inflammatory drugs and also makes it effective with less side-effects.2

Ginger also promotes fibrin breakdown reducing the risk of tiny blood clots and their possible contribution to uterine cramping. Our circulatory system causes blood to be forced to the extremities via the arteries, and veins return blood back to the heart. Veins work like a one-way street using a system of valves, also known as cusps, which force blood from stopping or flowing in the other direction. Varicose veins can appear in the pelvic area if these valves become defective. The uterus is lined with vascular tissue, also known as the endometrium, which thickens during the first half of the menstrual cycle in preparation for the possible implantation of a fertilized egg, and is shed two weeks later if there is no pregnancy. Ginger supports healthy endometrium development and shedding during periods.

Ginger may also help cramps for women whose pain is worsened by adenomyosis, where endometrial tissue that normally lines the uterus grows into the muscular walls of the uterus. The displaced tissue acts like normal endometrium as it thickens, breaks down and bleeds. This process enlarges the uterus, causing painful, heavy periods. Adenomyosis can be difficult to diagnose because many conditions, such as pelvic inflammatory disease, can cause similar symptoms including severe cramps during menstruation.

Ginger can help to ease menstrual pain that is aggravated by varicose veins and build-up of fibrin in blood vessels. People with varicose veins have reduced ability to clear their own fibrin, a connective tissue protein that can be deposited around blood vessels, making the surrounding skin hard and lumpy and increasing the risk of clots.

Let’s first understand where fibrin comes from. Fibrin is a strong insoluble protein produced by our body in response to bleeding. Whenever tissue is damaged, fibrinogen found in blood plasma is converted into fibrin molecules by a clotting enzyme called thrombin. These molecules combine together to form long fibrous chains which entangle the red blood cells and platelets at wound. This cross-linkage of this protein is completed by a substance called Factor XIII which results in a spongy mass that hardens and contracts to form blood clot. A person who has difficulty breaking down fibrin is at higher risk of developing varicose veins. Ginger, however, has been shown to break down excess fibrin around blood vessels. Bromelain, a substance commonly found in pineapples, garlic, and onions, has also been known to help break up fibrin.

In our clinic we have found that ginger in a high concentration, standardized to contain 20-25mg of ginger’s key active compounds, effectively helps to ease menstrual pain and cramping.

Recommendation:: 20-25mg ginger’s key active compounds including gingerols and shogaols, 1 to 3 times daily, between meals, or as directed by your healthcare provider.