For MENSTRUAL CRAMPS, bromelain works as a smooth muscle relaxant, easing painful uterine spasms. Its anti-inflammatory actions and ability to impede mediators of inflammation such as prostaglandins, thromboxanes, and kinins probably add to its menstrual pain-relieving benefits. The main actions of bromelain are to curtail swelling and inflammation, which then lead to reduced pain. 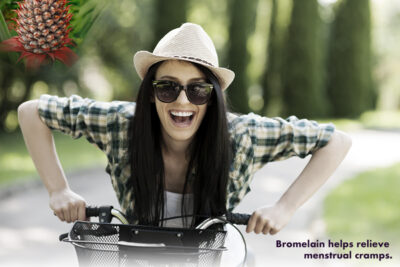 Bromelain is the name for a group of sulfur-containing proteases, enzymes that break down protein. It is extracted from the stem of the pineapple plant. Taken with meals, bromelain will be used by the body to digest proteins; but when taken on an empty stomach bromelain acts medicinally as a potent anti-inflammatory and repairer for soft tissues, to reduce pain and swelling. Bromelain is well-documented to survive stomach acid, which between meals is at a lower level than in pineapple, in which bromelain naturally occurs. Enzymes are proteins that speed up chemical reactions. The body contains 50,000 to 70,000 different enzymes that regulate every metabolic function. Without enzymes, metabolism would progress too slowly to sustain life.

During periods, normal mild uterine contractions help to expel discarded lining, the vascular tissue called the endometrium. This process is usually painless. But certain varieties of hormone-like substances known as prostaglandins, released just before and during menstrual periods, can intensify uterine activity, leading to increased muscle spasm. The muscle tissues of the uterine wall can tighten, which then inhibits blood flow to the uterus lining, leading to throbbing or cramping pains in the lower abdomen. In addition, tiny muscles in the blood vessels of the uterine wall tighten, further reducing blood flow, leading to waste build up in tissues, and exacerbating pain.  For some women, the discomfort can be severe enough to interfere with everyday activities for part of every month.

The enzyme bromelain is a very well-researched anti-inflammatory. It comes from pineapple and has been studied with comparison against leading pharmaceuticals. There is strong evidence to show that it may be more effective against many kinds of pain, including menstrual cramps, as well as arthritis and sports injuries. Bromelain works in several ways: it breaks down the fibrin mesh that is part of the inflammatory process, so that there is less tissue edema, swelling, and less scar formation. It also inhibits the formation of the inflammatory varieties of prostaglandins, which exacerbate menstrual cramping. Bromelain stimulates the production of plasmin, which can block the formation of inflammation-causing mediators. All of these helpful actions lead to reduced pain, even though bromelain is not a direct pain-reliever.

In a 2012 review of the therapeutic application of bromelain, in vitro and in vivo studies demonstrated that bromelain prevents edema, reduces the formation of blood clots, is fibrinolytic (prevents and dissolves blood clots), and has powerful anti-inflammatory activities. Bromelain is easily absorbed and survives the stomach acid and enzymes, with no side effects. Bromelain also has other therapeutic uses, including treatment of angina pectoris, bronchitis, sinusitis, surgical trauma, and thrombophlebitis, debridement of wounds, and enhancing absorption of drugs, particularly antibiotics. It can also relieve osteoarthritis, and various cardiovascular disorders. Bromelain also supports timely apoptotic cell death in aged cells.1

Since the 1950s, the Pineapple Research Institute in Hawaii and several pineapple producers have produced bromelain, and supported bromelain studies investigating its therapeutic properties. As early as the 1960s, many gynecological studies were underway. In one study, 64 patients with severe dysmenorrhea were treated intravaginally with a bromelain mix as soon as cramping appeared and 62% obtained immediate relief.2, 3

In our clinic, we frequently see bromelain relieving moderate and severe menstrual cramps, reducing patients’ need for pain-killing medications. To be effective as an anti-inflammatory and pain-reliever, bromelain must be taken between meals, so that it does not act as a protein-digesting enzyme. Effective doses of bromelain start at around 1000mg. A combination that includes amino acids such as leucine in a vegan capsule make for very easy absorption and enhance the soothing digestive effect of bromelain.

Recommendation:: Bromelain 1,000mg one to two times daily, between meals, or as directed by your healthcare provider.