Menopause is helped by the Vitamin E family

For Menopause, the Vitamin E family is a proven remedy for hot flashes and night sweats. Naturally-occurring Vitamin E includes mixed natural tocopherols and tocotrienols, which work together to ease hot flashes, night heats, sleep disruption, bladder urgency and leaking, and other menopausal symptoms. The vitamin E family is a classic for early menopause, when a woman may still have occasional periods and her body is still capable of making some estrogen. These vitamins help stabilize estrogen levels and enhance the helpful actions of even low levels of the body’s own estrogen. The Vitamin E family has a hormone-balancing effect, and patients report fewer mood changes, better sleep, and improved mental clarity. In addition, the vitamin E family has known antioxidant actions to fight cell-damaging free radicals in the body and therefore reduce inflammation in all tissues. This same action helps arteries to work better, leading to fewer hot flashes. 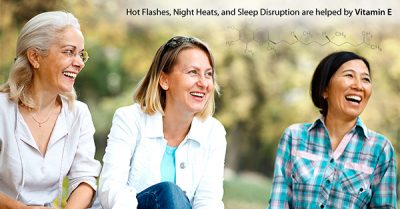 Hot or warm episodes that feel like an internal furnace, affect as many as 75% of menopausal women. A 2007 placebo, double-blind study of 51 women noted statistical significant differences in both hot flash severity and daily frequency with vitamin E therapy. Vitamin E was shown in a recent study from Gynecologic and Obstetric Investigation to be a natural alternative to estrogen replacement and an effective remedy for vasomotor symptoms including overheating and sweating. The researchers found there were significant statistical differences in the hot flash severity score after women took a 400 IU vitamin E daily for four weeks. They concluded that based on the trial, vitamin E is a recommended treatment for relief of hot flashes.1 In our clinic we see these benefits continuing for months or sometimes years.

Although vitamin E is well known as an antioxidant, recent investigation shows that it may help prevent narrowing of the arteries. This action has mostly been studied in cardiovascular disease, but may also explain how it stabilizes arterial blood flow and by that mechanism reduces hot flashes.

Stress is very common due to our hectic lifestyles, and reduced ability to cope is a typical symptom of perimenopause. During perimenopause, which is the 1-10 year stretch before periods cease and hormone levels plummet, estrogen and progesterone hormone levels are often out of balance and fluctuate unpredictably. This exacerbates many of the stress symptoms women experience, such as anxiety and impatience. Mixed natural vitamin E has been suggested as a supplement which may help ease stress during both perimenopause and menopause through its antioxidant properties. A study using mice found that when they were subjected to stress, their levels of oxidative stress – an imbalance of the production of free radicals and antioxidant defenses – increased along with antioxidant depletion. Those deficient in fat-soluble vitamin E showed a significant decline in their bodies’ own antioxidants and a higher sensitivity to acute inflammation. They summarized that vitamin E may be of practical importance in optimizing protective strategies against inflammation.2

Since stress causes neurotoxic damage in humans, most likely through the generation of free radicals, another study compared the antioxidant potential of vitamins A, E, and C on the oxidative stress in rat brains. It was found that vitamin E in isolation was most effective at reducing oxidative stress.3 Since depression is a common side effect of menopause and stress, another study examined serum vitamin E concentrations in major depressed patients versus normal volunteers. Out of 68 subjects, researchers found that those with low serum vitamin E concentrations were much more likely to suffer with depression than those with higher concentrations.4 The vitamin E family can therefore help with coping and with stress management during menopause. And it also protects the body and brain from the toxic effects of stress-induced tissue damage.

Taken by mouth, mixed natural vitamin E can gradually ease vaginal dryness and bladder symptoms including urgency, frequency, leaking or night-time bathroom trips, because it stabilizes estrogen levels. Applied topically, vitamin E can help restore vaginal lubrication gently and effectively. Using only capsules with vitamin E in a food base, such as sunflower oil, soybean oil, coconut or palm oil, it is safe to puncture the capsule and apply a pearl-sized drop with a fingertip to the vaginal tissues.

In our clinic we have seen the best results with mixed natural vitamin E, including all the tocopherols and tocotrienols that work synergistically together, as they occur in nature, for menopause care and other health conditions.

Recommendations:
400 IU of mixed natural vitamin E (as mixed tocopherols and tocotrienols) daily; or as directed by your healthcare provider.