For FIBROCYSTIC BREASTS the vitamin E family has demonstrated relief of breast pain or tenderness associated with fibrocystic changes. The tocopherols and tocotrienols that form the vitamin E family are necessary for hormones to function properly at the cellular level, and to maintain correct proportions of estrogen to progesterone. 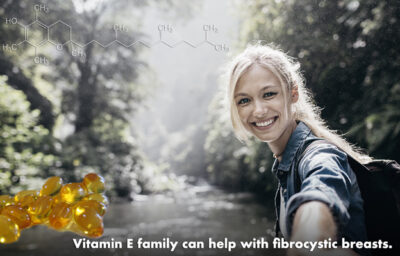 One of the major hormones that governs breast growth is estrogen, which triggers the proliferation of the cells that make up breast glandular tissue. Studies indicate that vitamin E affects how breast cells respond to estrogen: Breast tissue changes occur naturally with the cycling of hormones that accompanies ovulation and menstruation. Breast glands swell to prepare for a possible pregnancy, then shrink if a pregnancy does not occur. Women can have a higher risk of developing fibrocystic breast changes when these small growth spurts refuse to normalize after a menstrual cycle. Because of a genetic inability to calm the body’s inflammation process, some women may also be more prone to fibrocystic breasts.

Since the 1980s, fibrocystic breast changes were thought to be a condition of estrogen predominance and progesterone deficiency that resulted in fibrosis of connective tissue, followed by epithelial cell proliferation in the breast tissue. It was believed that vitamin E was particularly helpful for women who also had borderline or abnormal lipid profiles including low plasma levels of high-density lipoprotein and high plasma levels of low-density lipoprotein.1

Cyclic mastalgia is another term used to describe breast pain that is linked to hormonal fluctuations. A 2009 study published in The Breast Journal sought to clarify the therapeutic effects of vitamin E, and studied 150 women with cyclic mastalgia in a double-blind clinical trial. The administration of vitamin E had significant curative results at both the two and four month benchmarks, and its efficacy was superior to that of the placebo group. Researchers concluded that with its lack of side effects, vitamin E was a safe alternative to hormonal therapies being used at that time.2

Vitamin E is made up of a family of constituents known as tocopherols and tocotrienols that have important antioxidant activity in the body. While the natural tocopherols have documented health benefits as hormone modulators, antioxidants, and immune supporters, the alpha, beta, gamma and delta tocotrienols bring additional hormone balancing, nerve, and blood sugar benefits that tocopherols lack. Studies that showed little or no effect from vitamin E supplementation were lacking in part because they used only alpha-tocopherol, rather than also including the other important tocopherols and tocotrienols.

Antioxidants also have a significant role in reducing fibrocystic breast changes. Some studies found that a deficiency of nutritional antioxidants increased the occurrence of fibrocystic breasts. Other research found that antioxidants can slow the proliferation of fibrocystic breast tissue. Although benign breast disorders are very common, researchers are calling for more studies to detect biomarkers of oxidative stress as a determinate of cell proliferation activity which may lead to a progression of cystic and fibrous problems. A 2016 study measured vitamin E status, among other antioxidant vitamin levels, in sixty women with benign breast disease. Their conclusions “suggest an important role of intermittent oxidative damage in the initiation and development of benign breast disease and demonstrate the involvement of oxidant-antioxidant status in mediating this process.” In other words, women who take more antioxidant vitamins will reduce their risk of oxidative breast cell stress.3

A randomized clinical 2017 study treated fifty-six women with fibrocystic breasts with either 400mg vitamin E plus 1000mg omega-3 fatty acids, versus a placebo. They used blood samples to measure inflammatory markers, biomarkers of oxidative stress, and metabolic profiles. After twelve weeks of intervention, researchers concluded that those who received supplementation with vitamin E and omega-3 fatty acids had reduced markers of oxidative stress or inflammation.4

The vitamin E family, also known as mixed natural vitamin E, has eight different antioxidant forms. These include d-alpha, d-beta, d-gamma and d-delta tocopherols, and the alpha, beta, gamma and delta tocotrienols. D-alpha tocopherol is one of the more active members of the vitamin E family. In our clinic we see the best results with mixed natural vitamin E, including all the tocopherols and tocotrienols that work synergistically together, as they occur in nature, for fibrocystic breasts and other health conditions. Regarding occasional media reports, our view is that the safety concerns for ‘vitamin E’ apply solely to the synthetic dl-form, e.g. dl-alpha, a mirror image of naturally occurring vitamin E, which does not exist in nature. This unnatural isomer may actually block the beneficial d-form from entering cells. We recommend only the eight-constituent mixed natural form, preferably with generous enough amounts of the tocotrienols to be effective. We look for a guaranteed non-GMO formula in an absorbable and gentle natural base such as sunflower oil.

Recommendation: Mixed natural vitamin E, including d-alpha, d-beta, d-gamma and d-delta tocopherols, and alpha, beta, gamma and delta tocotrienols, 400 to 800 IU daily, with any meals; or as directed by your healthcare provider.