For FIBROCYSTIC BREASTS, Gamma Linolenic Acid (GLA) is a specific remedy for easing breast discomfort, and helping to reverse fibrous changes, and reducing cysts and lumpiness. Women who suffer painful fibrocystic breast changes are known to have low levels of GLA, a unique omega-6 fatty acid, in their tissues. They may additionally have problems processing essential fats to generate enough of the ‘good’ prostaglandins which have an essential role in reducing inflammation. Supplementing with GLA stabilizes hormone-related symptoms and calms inflammation, giving excellent relief of fibrocystic breast symptoms. 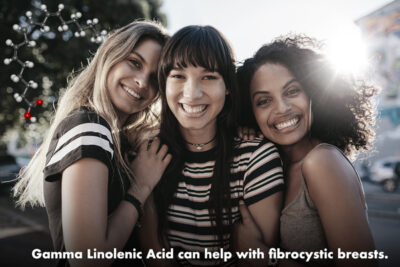 Fibrocystic breast changes are benign, and occur in 20-40% of premenopausal women, with increased lumpiness of the breasts and cyst formation, often involving several patches in both breasts. Tenderness and cyst prominence may be worse before periods and during PMS, and may be exacerbated by estrogen dominance or an increased ratio of estrogen to progesterone. Fibrocystic changes are also caused or aggravated by the methylxanthine group of foods, including coffee, tea, chocolate and caffeinated medications, which promote excess fibrous tissue and cyst formation.

Omega-6 fatty acids are frequent in standard American diets, but GLA is a unique variant which is much less commonly consumed. Although its precursor, linoleic acid, is found in nuts, seeds, and vegetable oils, its conversion into GLA can be hampered by the natural aging process, poor diet including excess saturated fats or sugar, or inadequate intake of vitamin C, magnesium, zinc, or B-complex vitamins, or disorders like diabetes. Because our bodies may not be able to form it from food, we often need supplemental GLA.

From GLA, the body forms prostaglandin E1 and the thromboxane A1, both of which can reduce inflammation, inhibit the formation of pro-inflammatory leukotrienes, improve blood flow, and inhibit platelet clumping. Prostaglandin E1 also has a role in regulation of healthy immune system function. Women who are unable to adequately convert linoleic acid to GLA, can lack these inflammation-calming molecules, and instead they have a predominance of inflammatory prostaglandins which worsen fibrocystic breast changes. Several studies have shown reduced fibrocystic breast pain using GLA over three to six months.1

As early as 1995, there was so much interest in the potential of GLA for medical use, that the Health and Nutrition Division of the American Oil Chemists’ Society convened an international conference to examine the biological value of GLA. This meeting brought together world-renowned experts who explored in-depth the biochemistry, metabolism, nutritional, and clinical uses of GLA. This conference examined hundreds of studies and launched an equal number examining its mechanism of action and anti-inflammatory benefits, and resulted in a book that summarized the studies to date.2

Research shows that a daily intake of between 200 to 1000mg of GLA is needed for all the important breast, skin and anti-inflammatory benefits. In our clinic, we have seen high-dose GLA give excellent relief of breast tenderness from benign causes, fibrocystic breast changes, PMS, or perimenopause. We also have several patients whose biopsy-proven fibrocystic changes reversed and disappeared after one year taking 240 or 250 mg daily of GLA.

Evening primrose oil is sometimes suggested for fibrocystic breasts because it has GLA, but it contains a relatively low amount. Instead, we recommend sources that provide an effective dosage in a bioavailable format. We find a super-high concentrate to be far more effective, requiring fewer capsules, and thus more economical. One capsule of a GLA concentrate containing 240-250mg GLA per capsule provides as much GLA as six capsules of 500mg evening primrose oil (9% GLA), or ten capsules of 500mg blackcurrant oil (containing only 5% GLA). We recommend our patients take between 240 to 480 mg daily for fibrocystic breast changes or benign breast discomfort. Improvement can begin after one to three months of use.

Recommendations: 240 to 960mg GLA, Gamma Linolenic Acid daily, or for seven to fourteen days before and seven days after each period starts, with any meals, or as directed by your healthcare provider.