For FIBROCYSTIC BREASTS, consuming a fish oil concentrate providing highly absorbable omega-3 fats reduces cyclical breast pain and lowers the risk of fibrocystic breast changes. Clinically, our patients are encouraged to maintain good levels of omega-3 fatty acids as this has proven to improve hormone and neurotransmitter balance, and to lower inflammation, all of which is well-supported in scientific literature. 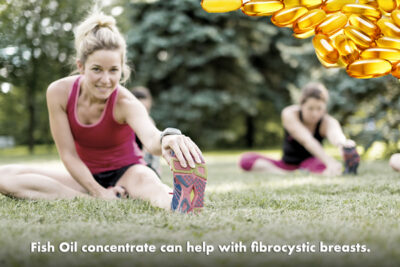 Numerous research studies show that concentrated omega-3 fats can help fibrocystic breast symptoms. The key fact is that our bodies cannot make omega-3 fatty acids, so they are essential fats that we must consume to reap numerous wide-ranging health benefits for many body systems. The term ‘omega-3’ refers to the chemical structure of the long-chain fat and the location of its double bonds. The main food sources of omega-3 fats include oily fish in the animal kingdom such as salmon, mackerel, trout and sardines, and organic cold-pressed flaxseed oil in the vegetable kingdom.

A 2017 placebo-controlled, randomized clinical trial of ninety-five women suffering from premenstrual symptoms, including breast tenderness that interfered in their daily activities, found that fish oil consumption significantly reduced symptoms. With longer use of an omega-3 supplement these women experienced continual and increasing improvement of breast symptoms, and higher quality of life. 2

In addition, a fish oil concentrate can help fibroadenomas, benign breast lesions made up of fibrous and epithelial cells. Fibroadenomas are a common benign breast condition among women, and they account for up to 50% of all breast biopsies being performed. Since dietary factors may influence benign fibrocystic breast conditions, researchers in a 2010 study examined biomarkers of dietary intake and risk of fibroadenomas in 1,300 women. They discovered that women with the highest omega-3 EPA concentration in their red blood cells had a 62% lower risk of developing a fibroadenoma compared to women with the lowest EPA concentrations.3

Similar research in 2009 found that women with the highest levels of omega-3 EPA fats in their red blood cells had a 67% lower risk of non-proliferative fibrocystic changes in contrast to women with the lowest red blood cell omega-3 concentrations.4 A 2017 randomized clinical trial was conducted on fifty-six women with known fibrocystic breast changes: They received either 1000mg fish oil or 400mg vitamin E. After a twelve-week intervention, researchers concluded that both supplementations had highly beneficial effects on inflammatory markers and metabolic profiles associated with reducing fibrocystic symptoms.5

The human body needs omega-3 fatty acids, but we cannot produce them ourselves, and thus we need to ingest them in the richest form possible. Omega-3 fats are an integral part of every cell membrane throughout the body, and they are required for membrane cell receptors to function. All cells are wrapped in a membrane that acts as a selective barrier to regulate passage of nutrients and waste in and out of the cell. The membrane is made of fatty acid phospholipids and cholesterol: each new cell will try its best to form its membrane with generous and optimal amounts of omega-3 fats. If these are lacking, the membrane will include saturated or other fats. But the cell membranes lacking omega-3 lipids are impaired: they are less flexible, less fluid, and less able to function as a vital barrier. They fail at keeping electrolytes, water and vital nutrients within the cell; and they cannot efficiently communicate with other cells or fully receive regulating hormones, which may include progesterone, estrogen and insulin. Homeostasis that should maintain stable conditions within tissues, including the breast, is then compromised.

In our clinic we prefer a pure concentrate of fish oil that gives much higher absorption of omega-3 oils than standard fish oil pills. With a highly concentrated formula, more of the essential omega-3’s are absorbed than from regular whole fish oil, and the concentrate has no fishy after-taste. Because of its ultra-high absorption, far fewer capsules are needed to obtain good levels of omega-3 fats in your body. Two or three fish oil concentrate capsules daily work as well as two tablespoons of whole fish oil, which would translate to about eight to ten regular fish oil capsules.

Recommendation: Omega-3 fish oil concentrate 1,000-2,000mg daily, with any meals, or as directed by your healthcare provider.