For FIBROCYSTIC BREASTS, Chaste Tree Berry is a potent adaptogen with estrogen-balancing effects that can relieve breast pain and tenderness. An adaptogen is a botanical that encourages and restores normal function by either enhancing a deficiency or calming over-activity; an example of the intelligence of nature. 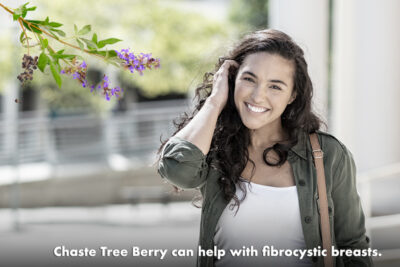 Chaste tree berry works to relieve fibrocystic breast pain partly because it increases dopamine activity in the brain: This then reduces prolactin release in the body. Too much circulating prolactin can cause disturbances in estrogen levels. In several placebo-controlled studies a clear relation between reduction of breast pain and reduction of serum prolactin levels could be established. A 2003 review of these double-blind studies sought to clarify the prolactin-suppressive component of chaste berry. The researchers found that it contains dopaminergic compounds virtually identical to dopamine itself, which explained why it was so effective in resolving mastodyndia, or breast pain.1

Chaste berry is obtained from the dried ripe fruit of the chaste tree, with its first documented use as a women’s health botanical at least 2500 years ago in ancient Greece. Known in Latin as vitex agnus-castus, the herb chaste berry has been in use since Greek, Roman, and medieval times for symptoms surrounding menstruation and for breast disorders. Women can regularly expect to see improvement of symptoms within their first cycle of its use.

Chaste tree berry’s historical significance has been proven scientifically, as researchers have found that it stabilizes hormone levels in women. There are several theories on why it is so clinically effective, but it is known to act upon the pituitary, the master gland deep in the brain, which produces FSH and LH (follicle stimulating hormone and luteinizing hormone): These two regulatory mediators oversee ovary function and blood hormone balance. As a pituitary adaptogen, chaste berry helps to stabilize FSH and LH output, either boosting or calming them as the body needs, and thus helps to maintain estrogen and progesterone levels.

Casticin is a key constituent in chaste berry. It is a flavonoid that was affirmed in a recent 2018 study to have anti-inflammatory properties for fibrocystic breasts. It has several pharmacological mechanisms of action, including pain relief as it binds to opioid receptors, and reducing excess prolactin secretion from the pituitary, to help reduce premenstrual and fibrocystic breast tenderness. This flavonoid casticin also binds selectively to estrogen receptors and mimics the good effects of estrogen, to help breast and gynecological symptoms.2

A 2011 review examined 14 years of studies on mastalgia in patients with fibrocystic breast changes, looking at treatment options short of surgery. In addition to stating that fibrocystic changes of the breast are common and a benign variant of breast development, the authors advised that lifestyle and dietary changes and botanical remedies should be the first treatment steps. This would include chaste tree berry, with its potent benefits for fibrocystic breast pain. These safe natural therapies avoid the serious side-effects of pharmacological and hormonal agents. The review concluded with the statement: “Treatment should start with simple lifestyle changes and advance in a stepwise fashion to abstinence from certain substances to mild remedies and finally to stronger remedies only in those where other means fail. Only then can this condition be conquered with the least adverse effects.”7

In our clinic, patients have achieved excellent relief from fibrocystic breast symptoms taking a daily dose of Chaste tree berry extract of 400-500mg, rich in the potent active constituent aucubin standardized to a high 0.6% percentage, especially when amplified in a formula with 50-75mg of whole chaste tree berry and its essential oils.

Recommendation: Capsules of chaste tree berry extract totaling 400-500mg daily, rich in the potent active constituent aucubin standardized to a high 0.6% percentage, ideally in a formula with 50-75mg of whole chaste tree berry, best absorbed between meals; or as directed by your healthcare provider.