For BLADDER INFECTIONS, CYSTITIS, natural mixed carotenes, astragalus, myrrh, garlic, and echinacea are potent antimicrobial agents that reduce the frequency of bladder infections and susceptibility to repeat infections. A balanced blend of scientifically-current herbs, vitamins and minerals, along with traditional remedies for immune support, can significantly reduce urinary tract infections (UTI).  We prefer a rich formula of ingredients that work in complementary ways, with immune-boosting vitamins and minerals combined with medicinal herbs, to bring faster and deeper action to help resolve acute and chronic UTIs and cystitis. 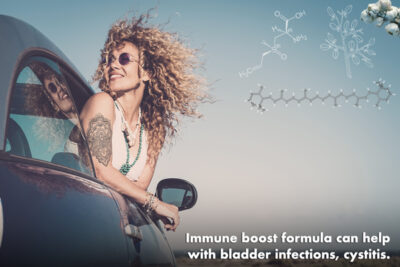 Carotenes can convert into as much vitamin A as the body needs with no risk of overdose. They encourage white blood cell actions against bacteria in several ways: by enhancing helper T white blood cell activity, and also increasing the output of antibodies that attach to invading microbes. With its direct actions against infection, natural mixed carotenes it can boost these infection-fighting armies by up to 30% in only seven days.

Astragalus has been found to boost innate host defenses in the early stages of urinary tract bacterial infections. Defending the mucosal surfaces that line the bladder and urethra is critical, and astragalus polysaccharides have been shown to enhance mucosal surface resistance with in vivo and in vitro mice studies.2 Astragalus stimulates the overall immune system, activating white blood cells to engulf and kill invading microbes. Astragalus is considered a deep immune supporter, as it can raise white blood cell counts for people with leukopenia, chronically low white blood cell levels, and seems to be especially valuable for people whose immune systems have been damaged by chemical or other exposures.

Myrrh is antibacterial and antiseptic, reducing inflammation to help with cystitis. The earliest antimicrobial use of myrrh dates back to 1100 BC, where Sumerians used myrrh to treat infected teeth and intestinal worms. In ancient times, myrrh was used by the Egyptians for embalming. Myrrh oil has also long been used for the treatment of skin wounds and fungal infections caused by Candida albicans and Tinea pedis. A 2012 an in vitro study of essential oil samples of myrrh and sweet myrrh (Commiphora guidotti and Commiphora myrrha), collected from different regions of Ethiopia, was investigated independently and in combination to determine their anti-infective properties. Researchers concluded that, “The historical and antimicrobial importance of these oils can thus not be ignored as efficacies prove extremely promising as antimicrobial agents.”4 In our clinic, formulas including myrrh have proven very helpful for acute or recurring urinary tract infections.

Garlic has an exceptionally wide range of actions against bacteria, viruses, and fungi. In studies, garlic has been shown to actually kill various types of staphylococci, streptococci, E. coli, salmonella, candida albicans, and viruses, versus just stopping their spread. Several active constituents are responsible including allyl sulfur compounds, ajoene, and allicin. Garlic also has immune boosting effects: it enhances phagocytosis of invading microbes, encourages more lymphocyte white cells, and increases killer cell activity and cytokine production. A 2014 report looked at cases of recurrent cystitis and urinary tract infection showed resistance to antibiotics. They received an alternative therapeutic regimen which included garlic, resulting in significant health improvement and symptoms relief for more than 12 months without recurrence. Researchers concluded that garlic was especially effective in UTI patients who had developed antibiotic resistance.5

Additionally, we like a formula with an array of other immune-supportive nutrients. Vitamin C has direct action against viruses and bacteria and it increases the body’s interferon levels improving white blood cell responses against microbes. Vitamin E boosts both antibody production and white cell immune functions with T-cells increasing up to 28%. Vitamins B6, B12 and folic acid are all required for making white cells and for their healthy function, and for an effective antibody response. Selenium is necessary for the development of white cells, and it stimulates their actions, via the enzyme glutathione peroxidase. Zinc promotes the destruction of invading microbes, and enhances the anti-microbial benefits of carotenes. Bioflavonoids modify our body responses to viruses, and they have direct antiviral and anti-inflammatory actions.

Other botanicals for immune-boosting include Echinacea, which has been the subject of many hundreds of research trials. The angustifolia and purpurea species are the best documented, and here have appropriate standardized doses. Inulin and other Echinacea saccharides can raise immune mediators that activate macrophage white cells, enhance the ability of macrophages to engulf bacteria, and increase natural killer cell activity and the number of active T-cells. Echinacea appears to also have direct activity against viruses. Berberine, the active constituent in Oregon grape root, can attack and cripple many kinds of bacteria, protozoa, and fungi, and prevent streptococci from adhering to tissues. Green tea is considered a deep immune supporter, it helps trap and detoxify immune-damaging environmental toxins. Eleutherococcus, or Siberian ginseng, reduces susceptibility to infections, and enhances antibody and interferon production, and boosts natural killer cell activity and phagocytosis of unwanted invading microbes. Licorice root can impede various staphylococci, streptococci, and the yeast candida as shown by in vitro testing. It also encourages interferon and is a useful anti-inflammatory.

In our clinic, we have seen excellent resolution of cystitis using a balanced blend of these immune-boosting herbs and nutrients.