For BLADDER INFECTIONS, CYSTITIS, buchu leaves contain antibacterial volatile oils that are activated in the urine to kill microbes and resolve infection. Buchu is a natural and extremely effective remedy for urinary tract infections (UTI). It may prevent UTIs or significantly reduce the number of infections in people who are especially prone to them. Buchu is a flowering shrub native to southern Africa and its leaves contain diosphenol, an antibacterial volatile oil. Buchu also has mucilaginous compounds that soothe the urinary tract lining. It is a diuretic, improving the flow of urine to flush through the bladder preventing harmful bacteria from adhering to the bladder wall. Since it is estimated that roughly half of all women will experience a UTI at some point, and up to 10% of women suffer from a UTI as often as once or more per year, finding natural and effective alternatives to antibiotics is important. 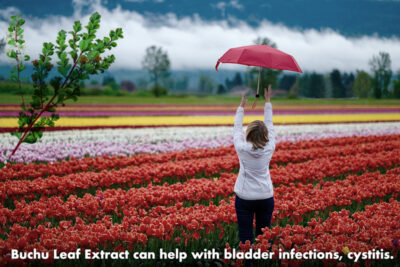 The Khoi San people of South Africa used buchu, Agothosma Betulina, as an effective treatment for bladder and urinary tract infections and the plant is not native in any other part of the world. The ancient wisdom behind buchu has been part of the indigenous South African culture and heritage of for centuries with its earliest documentation in 1652, when the Cape’s Bushmen introduced the healing herb to the first Dutch colonists. It became a rare commodity and in Europe was nicknamed “Noble’s Tea” because only the wealthy could afford it. The British Pharmacopoeia of 1821 listed buchu as a treatment for “cystitis, urethritis, nephritis and catarrh of the bladder.” In addition to diosphenol, buchu leaves contain flavonoids – including rutin, disomin, hesperidin, and quercetin and quercetin derivatives, substances that are responsible for its medicinal properties.

As a diuretic, buchu has an effective flushing action on the kidneys encouraging frequent urination, which helps clear bacteria from the urinary tract. Its volatile oils stimulate urination and are excreted virtually unchanged by the kidneys, rendering the urine slightly antiseptic.

A 2008 review published in the Journal of Ethnopharmacology “aims to unite aspects on the botany, traditional and modern day uses, chemistry and pharmacological data on ‘Buchu’ which is undeniably one of South Africa’s most renowned botanical assets.”5

Several studies have been undertaken to assess the antimicrobial activity of buchu extracts with consensus that it displays good antibacterial activity; it appears to be more active against gram positive than gram negative bacteria.6 Flavonoids found in buchu may modulate inflammation and strengthen connective tissue, possibly due to coumarins and phenolic substances stimulate the body’s macrophages. Buchu’s pharmacological actions include diuretic, antimicrobial, anti-inflammatory and antiseptic benefits. In addition, buchu may prevent bacteria from attaching to human tissue by hampering bacteria from developing biofilms.

In our clinic, we have found that Buchu leaf extract concentrated to 4:1 plus a broad spectrum of botanicals that are antimicrobial, immune boosting, diuretic, and soothing for inflamed tissues, can prevent up to 90% of UTIs. We like to includes herbs that prevent bacteria from adhering to the lining of the bladder; herbs that are activated in the urine to kill bacteria; and the botanical demulcent marshmallow which soothes inflamed membranes in the urethra and bladder. Uva ursi or bearberry is a small evergreen shrub. Its leaves contain the quinone arbutin, which is activated in the urine to kill bacteria. Uva ursi is also a preventive: in one well-known study tracking women prone to recurring bladder infections for one year, 20% of the control group had infections, but none of the uva ursi group did. Pipsissewa is an arbutin-containing urinary antimicrobial that also has no action in the blood stream and becomes activated in the urine. Cranberry is a powerful anti-adherent remedy that prevents bacteria from attaching to the lining of the bladder and urethra. If bacteria cannot attach, they are unable to survive long or multiply. Cranberry has long been a classic remedy for urinary tract infections (UTI) caused by bacteria such as E. coli, and it has several other potent actions: It acidifies the urine making it less hospitable for bacteria, and also contains hippuric acid which can directly kill bacteria. Oregon grape root is rich in berberine, which can activate macrophages, white blood cells that engulf and kill bacteria. Berberine also prevents bacteria from adhering to human cells. Marshmallow root is a demulcent, containing soothing mucilage which adds a protective coating for the bladder and urethra, soothing burning and irritation.

Recommendation: Buchu leaf extract (4:1) 300mg daily for prevention, and up to 900mg daily for seven to ten days if bladder symptoms begin, or as directed by your healthcare provider. Like most herbs, it is best absorbed between meals.