For IDEAL WEIGHT, probiotics at a 50 billion count have a crucial role in maintaining a healthy metabolism. These beneficial bacteria can block fat absorption, reduce the conversion of starch to fat, ease sugar cravings, and lift our moods leading to lower food intake. High-potency probiotics have an equally important role in the internal health of the human digestive tract. They enhance digestion and absorption, increase the bioavailability of minerals, and can help generate vitamins. When all our tissues have better levels of vitamins and minerals, thanks to improved uptake, cells are less ‘hungry’ and food cravings decline, because of the body’s better nutritional status. Having ample essential nutrients in our tissues is key to attaining an ideal weight. 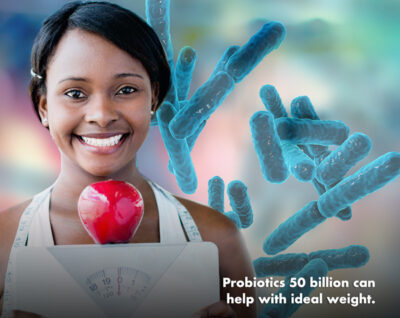 Probiotics are helpful microbes with profound benefits for the metabolism, immune system, and gut. The term “probiotics” refers to the 100 trillion beneficial bacteria that naturally occur and line every part of a healthy human digestive tract, from mouth to anus, from birth onwards. The gastrointestinal tract is a finely tuned ecosystem that naturally houses at least 500 varieties of flora. Total bacteria in the bowel are nine times more numerous than cells in the body. Billions reside in the small intestine, primarily the Lactobacillus family. In the colon, there are even greater numbers where the Bifidobacterium family predominate.

We first acquire lactobacillus in the birth canal during the birth process, then bifidobacteria are passed through breast milk. As we grow, numerous other species arrive from food and thrive in our intestines. There is a finite amount of space for microbes in the gut: helpful flora are more proficient at obtaining nutrients and so they can colonize the gut to crowd out and starve unwanted invading microbes. The human body relies upon ‘good’ flora for immune function, cholesterol clearing, reducing inflammation, and maintaining ideal weight.

‘Friendly’ bacteria also help to nourish liver and muscle cells as they generate their favored fuels, propionic acid and acetic acid. Probiotics can ease gas and cramps, as they crowd out noxious bacteria which ferment carbohydrates to cause bloating and uncomfortable distention. These unwelcome microbes putrefy proteins to produce vaso-active amines such as tyramine, histamine, putrescine and cadaverine, which can lead to leaky gut symptoms. Good bacterial balance in the gut is necessary for weight balance, and probiotics can help.

Here are more details about how probiotics help attain ideal weight. Since 2012, data has shown that friendly gut bacteria can block fat absorption from the gut. We need bile to absorb fats, and probiotics may degrade bile salts as they enter the intestine from the biliary ducts. Without bile to emulsify fats, fat absorption is limited. One study found that patients lost about 8% of the visceral fat around the heart and organs, which is linked with disease risk, and up to 3% of their belly fat after taking probiotics for three months.

Sugar and processed foods make losing weight harder because they encourage overgrowth of gut candida yeast and noxious bacteria. These problem microbes lead to fatigue, less activity or exercise, and more weight gain. To make things worse, overweight people have more of the kinds of bacteria that convert complex carbohydrates into fat, which goes against them even if they eat a whole-food diet. But as they lose weight these species decline, and microbes that discourage fat assimilation increasingly start to predominate. Studies have already demonstrated that the intestinal flora of obese individuals differs from that of thin people. This is probably due to a high-fat and low fiber diet promoting fat-forming bacteria at the expense of others, and also because heavier people’s guts harbor more fat-promoting microbes. Taking potent probiotics will speed up the bacterial rebalancing in favor of fat-burning microbes.

A study published in the British Journal of Nutrition in 2014 tested a hypothesis to see if probiotics could help reset intestinal microbial balance in favor of bacteria that promoted a healthy weight. Researchers recruited 125 overweight men and women who underwent a 12-week weight-loss diet, followed by a 12-week period aimed at maintaining body weight. Throughout the entire study, half the participants were given probiotics while the other half received a placebo. After the 12-week diet period, researchers observed an average weight loss of 4.4 kg in the probiotic group and 2.6 kg in the placebo group, most marked for the women. After the 12-week maintenance period, the weight of the women in the placebo group had remained stable but the probiotic group had continued to lose weight, to reach a total loss of 5.2 kg per person. In short, women consuming probiotics lost twice as much weight over the 24-week period of the study. Researchers also noted that the individuals receiving probiotics had a drop in their appetite-regulating hormone leptin. They also benefited from a lower overall concentration of the types of intestinal bacteria related to obesity.1

Another 2014 study found that people taking lactobacillus lost weight over six months even when they ceased to restrict calories. The control group who did not ingest probiotics regained pounds. This indicates the powerful and impressive influence of probiotics on achieving optimal weight, even without dietary changes.

Gut bacteria can affect appetite: unhelpful intestinal bugs that need sugar cause the body to signal more sugar-cravings to the brain. By leading a person to eat more sugary foods, they contribute to worsening insulin resistance and inflammation: Crowding them out with ‘good’ probiotics can reduce sugar cravings, curb appetite, and improve carbohydrate and fat metabolism. Clinical experience indicates that probiotics reduce the hormone leptin which stimulates appetite.2

Probiotic treatment complemented by a healthy diet could accelerate weight loss and fight obesity, according to Taiwanese researchers. A recent 2018 study found that probiotics have a helpful role in down-regulating obesity-related metabolites in the gut microbiome. This means that breakdown products of food or metabolism that cause weight gain are lessened by ‘friendly’ probiotic bacteria. This trial also affirmed that probiotic supplementation enhances energy expenditure and reduces appetite.3

For fat metabolism, probiotics also improve lipid metabolism and clearing of fats from the body. In 2015, an important study of thirty healthy men examined the influence of helpful bacteria on the amount of fat in bowel movements. Fecal samples showed that the men who received a probiotic excreted a higher amount of fat in their feces, even after just two weeks, than a control group on a similar diet but without probiotics.4

Since cholesterol levels are an important measure of the body’s ability to handle fats, it is significant that cholesterol totals and ratios benefit from probiotics taken daily. Evidence indicates that Lactobacillus species can reduce total and ‘bad’ low-density lipoprotein (LDL) cholesterol while maintaining ‘good’ high-density lipoprotein (HDL) levels. Probiotic bacteria can bind bile acids to cholesterol as it passes through the digestive tract. This bile-cholesterol complex can then gently be excreted from the bowel. Probiotics can influence blood fat levels to drop, as more fatty acids form in the intestine, and from there they can be excreted. Probiotics also encourage cholesterol to move out from blood into the liver, from which it can be eliminated, and they reduce the amounts of cholesterol made by the liver.

For mood, ‘friendly’ probiotic bacteria can boost wellbeing, and reduce comfort-eating. Since 2013, studies have confirmed a brain-gut bacteria link in humans, and brain health and mood may be much helped by probiotics. Cheerier mood also greatly influences the ability to maintain a healthy weight. MRI scans show that regular probiotics alter the activity of brain regions that control emotion and sensation.

Probiotics can improve mood in several ways: ‘good’ bacteria in the gut help to make neurochemicals, including wellbeing serotonin and dopamine, and relaxing GABA; lower stress hormones like cortisol result from improved gut neurochemical levels; probiotics regulate the immune system and calm inflammation which is now considered to be one underlying cause of depression, anxiety and ‘brain fog’. Happier mood is clearly linked with less binge eating, and with feeling well satisfied with smaller portions. A quick online search indicates a burgeoning interest in research surrounding probiotics and their important benefits for healthy weight, mood support, and metabolic health.

With our patients, we have many who are experiencing helpful benefits in healthy weight management after adding a high potency, time-tested formula with the correct species. We recommend a count of 40 to 50 billion colony forming units, especially including Lactobacillus gasseri and Lactobacillus paracasei. To help weight loss, a probiotic formula also needs to be shelf-stable, with a guarantee that the bacteria are alive and thriving through its entire shelf life, at room temperature. We also look for a blend that is tested for resistance to digestion, and successful adherence to intestinal cells.

Recommendation: One dose daily providing 40 to 50 billion CFU, including the species Lactobacillus gasseri, L. paracasei, and also at least five of the following species: L. acidophilus, L. plantarum, L. casei, L. brevis, L. rhamnosus, L. salivarius, Bifidobacterium lactis, B. breve, B. bifidum, and B. longum. Take once daily, between meals or with cold food, (never with hot food), or as directed by your healthcare provider.