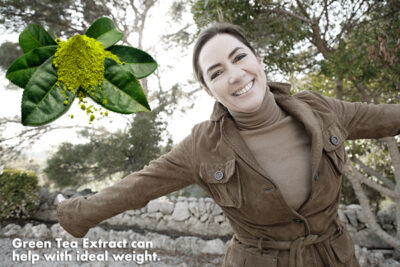 Green tea extract is produced from the lightly steamed and dried leaves of Camellia sinensis, which is one of the most widely consumed beverages in the world. Green tea is extremely high in polyphenols which have impressive medicinal actions. Steaming tea inactivates enzymes in tea leaves that would otherwise degrade and oxidize the medicinal polyphenols. By contrast, oolong or black tea have far less health benefits because the enzymes in un-steamed tea leaves break down therapeutic polyphenols. Archeological evidence suggests that people consumed tea leaves steeped in water 500,000 years ago. Green tea extracts have a long history of use in traditional Chinese and Ayurvedic medicine. Practitioners used green tea for many health conditions such as diuretic actions, regulating body temperature and blood sugar, promoting digestion, and improving mental processes.

For medicinal use however, a standardized extract is far more potent. Green tea extract contains healing polyphenols, including catechin, epicatechin, epigallocatechin gallate (EGCG), epigallocatechin-3-gallate, and proanthocyanidins. Epigallocatechin gallate (EGCG) is a powerful antioxidant compound in green tea that is responsible for its thermogenic properties. EGCG shows antioxidant action both in vitro and in vivo as good as or better than vitamins C or E in many studies. Tissues that are protected from oxidative injury have higher metabolic rates, and can burn fat more efficiently. Even better, in addition to its own antioxidant effects, green tea also stimulates the body’s own antioxidant enzymes in the liver, small intestine, and lungs, making it an outstandingly powerful detoxifying substance. Better removal of the body’s waste through these organs of elimination boosts metabolism and allows the body to achieve its ideal weight. Healthy liver function improves hormonal balance, which also enhances weight management.

The American Journal of Clinical Nutrition states that green tea extract is one of the most effective naturally occurring botanical metabolism boosters. After a dose of green tea extract, metabolic rate is increased by 4% over the next 24 hours. Recent studies point to polyphenols in green tea–specifically the catechins–that rev up the body’s metabolic engine, though there was past speculation that this was partly due to the caffeine content. In a recent study at the University of Geneva, researchers concluded that, “Green tea has thermogenic properties and promotes fat oxidation beyond that explained by its caffeine content.” In addition, they discovered that green tea extract directly inhibited gastric and pancreatic lipases, which are enzymes primarily responsible for fat absorption.1,2  This means that green tea discourages dietary fat from moving out of the gut and into the blood stream and tissues, so that fatty foods can leave the body.

Reaching one’s ideal weight requires stabilizing blood glucose levels with solid nutrition throughout the day, including protein and vegetables. Green tea extract is a wonderful adjunct tool. As we age, our bodies become less efficient at using and clearing any excess of carbohydrates, sugars, and grains, making it harder to effectively regulate blood sugar levels. Blood sugar dysregulation, with excessively high or low glucose levels, can cause increased cortisol or stress hormone levels. This in turn disrupts hormone regulation, which can fuel weight gain. For these reasons, good steady blood sugar levels enhance optimal weight and support weight loss, if that is a goal.

A notable 2012 study found that EGCG can reduce the blood sugar spike that occurs after eating starchy foods. In test subjects given EGCG, the jump in blood sugar that typically occurs after eating was about 50% less, a significant reduction compared to those who did not receive green tea. This study tells us that EGCG may stabilize starch breakdown and reduce its conversion into the sugar that eventually enters our bloodstream, preventing blood sugar spikes.6

In our clinic, we have had excellent results with a formula providing the most potent of green tea’s medicinal compounds, epigallocatechin gallate or EGCG, present at an ideal 45% or 165mg per capsule. This is equivalent to three cups of green tea, but without the tea’s 120mg of caffeine. We like a formula that includes the healthful benefits of theanine, lignans, and chlorophyll, along with an additional smaller amount of whole green tea leaf. Green tea must be of sufficiently high concentration to reach therapeutic levels. We recommend a total dose of 300 to 400mg per capsule.