Ideal Weight is helped by Coenzyme Q10 with Lipase

For IDEAL WEIGHT, Coenzyme Q10 with Lipase provides essential nutrition for most of the body’s energy production at the cellular level and thus it is key to maintaining a healthy weight. Research indicates that up to 50% of overweight people have low serum CoQ10 levels, which can slow their metabolism. For our patients, daily supplementation of CoQ10 can lead to doubling their weight loss over several months with the same calorie intake. Also, CoQ10 improves stamina and motivation to exercise, which further helps to achieve an optimal weight. 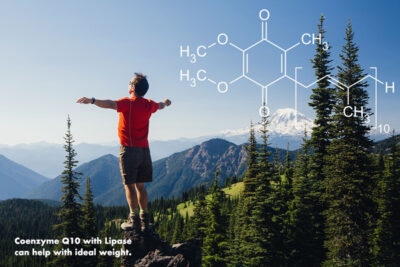 Doctors and research clinicians find that this fat-soluble antioxidant contributes to 95% of the body’s energy output. Since CoQ10 is part of the electron transfer chain in the mitochondria of every cell which is the last phase of liberating energy from food, a deficiency of CoQ10 can impede energy and slow the body’s metabolism. And so CoQ10 is a powerful aid for achieving an optimal weight.

CoQ10, or ubiquinone, is a powerful fat-soluble antioxidant produced naturally in the human body and found in every cell and tissue, particularly in mitochondria. The name ubiquinone is derived from its ubiquity.

Coenzymes of many kinds support enzymes in their various biochemical activities. CoQ10 is a key participant in the electron transfer chain of chemical reactions that release energy within every cell. It occurs in higher concentrations in the kidneys, liver, and heart, partly because they have higher energy requirements.

Within the mitochondria of cells, CoQ10 is a fundamental nutrient that plays a key role in the Krebs cycle, the final stages of food breakdown before energy is freed from the chemical bonds of the food. This produces adenosine triphosphate (ATP), a molecule cells use as their main source of energy for all body processes. Ingesting extra CoQ10 improves the efficiency of ATP production in mitochondria, boosting the amount of energy available from food.

Our internal CoQ10 levels decline with aging and stress, and with the use of statin drugs. Older people may find it harder to lose weight due to impaired cellular energy production and declining CoQ10 in their tissues. Over time, the ability of cells to regenerate and withstand oxidative injury or other stressors declines. Because a drop of CoQ10 levels correlates with the aging process, it is regarded as one of the most accurate biomarkers of aging. CoQ10 is found naturally in very small quantities in meat, fish and whole grains. The amount of CoQ10 in these dietary sources, however, is not enough to significantly increase CoQ10 levels in the body.

In a 2018 analysis of the benefits of CoQ10 on risk factors in overweight patients, researchers gathered evidence from 14 research trials that involved a total of 693 subjects. While the results varied somewhat depending on the intervention duration, the mean age of the subjects, and the initial BMI readings, CoQ10 was substantially helpful. The findings indicated that daily CoQ10 supplementation led to better glucose control and more stable fat and lipid levels in overweight patients.1 This means that as well as helping with energy, CoQ10 also reduces the possible complications from being overweight.

A meta-analysis in 2016 of 14 studies looked at the helpful effects of CoQ10 on diabetes biomarkers in healthy subjects and those with diabetes mellitus. The results concluded that CoQ10 supplementation significantly reduced fasting blood glucose levels in the overall analysis.2

Lipase is an important type of fat-digesting type of enzyme that is naturally made by the pancreas. Pancreatic lipase is the main enzyme that breaks down the triglyceride fats found in our diets into monoglycerides and pairs of fatty acids. Lipase actually comprises a group of enzymes that are essential for digesting triglycerides, fats, and oils that we eat, and transporting them into the bloodstream, and then into tissues where the fats are needed. A spectrum of lipase enzymes in the human gut work in a range of pH environments from the saliva down to the small intestine. By facilitating a correct balance of fat absorption and use by cells, lipase helps with achieving and maintaining an optimal weight and BMI. It is essential for strong cell membranes, and a lively metabolism.

In addition, the absorption of Coenzyme Q10 is greatly improved by lipase. CoQ10 tends to be poorly assimilated from the gut, because it is a large molecule that only dissolves well in fat, but not in water. If CoQ10 is combined with lipase that is identical to the body’s own fat-digesting enzyme, then CoQ10 is carried efficiently from the intestine into cells along with dietary fat, for maximum absorption.3 Higher CoQ10 levels in tissues bring more of the many benefits for energy production, fat breakdown and gut health that help with weight balance.

In our clinic, our patients working with a CoQ10-lipase blend to optimize their weight regularly experience increased energy, steady and gradual weight loss of 2 to 5 pounds per month, and better exercise capacity and endurance over time. They also gain improved cardiovascular capacity and muscle endurance, which in turn encourage more exercise and easier weight balance.

As a supplement, CoQ10 should be taken with meals including fat or oil, as it absorbs significantly better in the presence of fats. We look for a Coenzyme Q10 that is combined with lipase, which can give a 50% boost to the amount of CoQ10 that gets into the body. This means that a dose of 100mg CoQ10 can deliver the benefits of 150mg when partnered with lipase.

Recommendation: A daily dose of Coenzyme Q10 (as ubiquinone) 100mg, with Lipase 300 FIP, and optional Vitamin C (as calcium ascorbate) 150-200mg, Vitamin E (in the d-alpha form to maintain freshness) 50 IU. Take once or twice daily, with any meal including fat or oil, or as directed by your healthcare provider.