Ideal Weight is helped by 5-HTP

For IDEAL WEIGHT, the amino acid 5-HTP works to increase serotonin production in the brain, which brings greater feelings of satisfaction after eating modest portions and so directly reduces appetite. 5-HTP is short for 5-hydroxy-tryptophan, and it is a building block in the body for serotonin production. Serotonin in a neurotransmitter that alleviates symptoms of depression, anxiety, and sleeplessness which could otherwise lead to increased eating and weight gain. Drug companies have long sought a pill to mimic the natural way 5-HTP calms hunger by supporting serotonin levels to encourage weight loss, so far without pharmaceutical success. 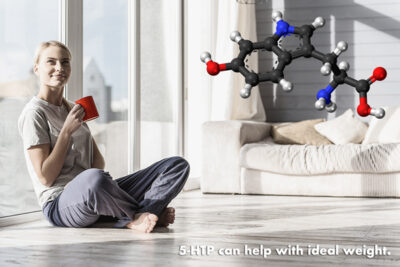 5-HTP is naturally produced in the body from the essential amino acid L-tryptophan. An amino acid is “essential” when it cannot be made in our own tissues and must come from food or supplementation. 5-HTP is a crucial precursor or building block for the central nervous system to produce serotonin.

Tryptophan is a large amino acid and competes with all of the body’s other amino acids to enter the brain through a strict gatekeeper known as the blood-brain barrier. Carbohydrates trigger the release of insulin, which removes most amino acids from the blood, but not tryptophan. This clears the pathway for tryptophan to enter the brain and form serotonin and, ultimately, melatonin. Once in the brain, tryptophan is converted to the neurotransmitter serotonin. This plays a major role in mood, creating a feeling of well-being and relaxation. Serotonin also significantly affects appetite, giving a feeling of satisfaction with smaller portions of food.

Brain neurons that release serotonin are unique in that the amount of serotonin they release is controlled by food intake. Carbohydrates increase serotonin release, acting via insulin secretion and the “blood plasma tryptophan ratio.” The total amount of protein we ingest does not influence serotonin, though it helps weight loss in other ways. This ability of neurons to send out neurotransmitter signaling messages in response to food consumption is a feedback mechanism that normally keeps carbohydrate and protein intakes fairly constant.

Unfortunately, many people learn to overeat carbohydrates–particularly snack foods, like potato chips or pastries which are high in carbohydrates and fats–to make themselves feel better, as these foods boost serotonin. This use of certain foods as if they were mood-elevating drugs is a frequent cause of weight gain. Eating excess carbohydrates to raise serotonin and mood is also seen in women with premenstrual syndrome, in people who are stressed, or who suffer with seasonal depression, or in people who are attempting to give up smoking. Nicotine, like dietary carbohydrates, increases brain serotonin levels; nicotine withdrawal has the opposite effect. This situation also occurs in patients with normal-weight bulimia.1

Research studies indicate that brain chemistry and tryptophan balance may strongly influence several different health conditions, including bulimia, obsessive-compulsive disorders, and obesity. In studying the benefits of 5-HTP, researchers suspect an underlying brain condition may be at the root of a number of food and behavioral ailments.

Weight loss can trigger an array of hormones that increase appetite; 5-HTP can counteract these hunger-inducing hormones and thus it helps to reduce sensations of hunger.2 This is a strong hypothesis, although the exact neurological and biochemical mechanisms are still being researched.

In a two-part, double-blind study, Italian researchers gave 20 obese adults either 5-HTP or placebo over two 6-week periods. In the second part of the study, after the first 6 weeks, a diet was recommended. The 5-HTP-treated patients enjoyed significant weight loss during both periods. A reduction in carbohydrate intake and a consistent presence of early satiety were also found in those who took 5-HTP.3

In one important study, 19 obese women with body mass indices ranging between 30 and 40 participated in a double-blind crossover study to evaluate oral 5-HTP administration on feeding behavior, mood state, and weight loss. Either 5-hydroxytryptophan at a dose of 8 mg/kg/day, 500 to 700mg, or placebo was administered for five weeks. During this time the patients were not prescribed any dietary restrictions. Feeding behavior was investigated by means of a questionnaire designed to establish the onset of feelings of fullness or satiety. Food intake was evaluated using a three-day diet diary. Although 5-HTP did not appear to affect mood in this trial, the 5-HTP group had decreased food intake and more weight loss than the women taking a placebo during the period of the study.4

Another research trial in 1998 enlisted 20 people with diabetes who were randomly assigned to receive either 5-HTP or a placebo. The results showed that those who received 5-HTP consumed approximately 435 fewer calories per day, even after only two weeks, compared to the placebo group. The subjects on 5-HTP voluntarily chose to eat less carbohydrates, so this study also showed that 5-HTP primarily inhibited the intake of calories from carbohydrates. This led to better blood sugar control, improved weight loss, and reduction of long-term diabetes risks.5

Several studies have shown a strong correlation with 5-HTP and reducing excessive food intake in states of stress or depression.6 5-HTP works both to reduce sweet cravings and to elevate mood. It helps to bring a sense of satisfaction with smaller portions, and enhances feelings of emotional calm and wellbeing.

In our clinic, many patients include 5-HTP as a key part of their bariatric care and weight loss programs. They regularly tell us that on 5-HTP they have less interest in desserts, breads and sweets, and less intake of these foods. Smaller portions feel more filling, and these patients experience steady weight loss toward their goal weights.

Recommendation: 5-HTP 200 to 600mg usually taken at bedtime, as it is also a sleep aid, or as directed by your healthcare provider.