Peak Daily Health is helped by Vitamin D3, in natural oil base

For PEAK DAILY HEALTH, abundant evidence supports that vitamin D3 is a potent immune booster and mood supporter, especially during winter. It also helps to build strong bones, eases joint and connective tissue inflammation, and it is needed for cell growth and neuromuscular function. Over the long term, vitamin D3 reduces the risk of several serious illnesses. It achieves all this because it has key roles in many metabolic processes, not because it is a panacea. 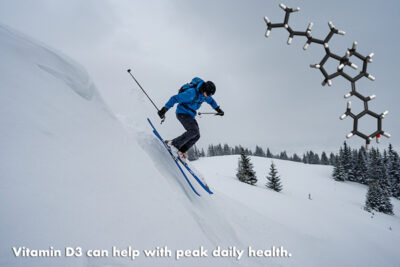 Vitamin D3 is technically a pro-hormone, a precursor for the active hormonal form, rather than a true vitamin. A hormone is a substance made in the body that travels in the blood to reach its target tissues, where it regulates metabolic functions.

Vitamin D3 works by entering cells and attaching to vitamin D receptors within the cell nuclei. Once vitamin D3 locks into its receptor, the combination stimulates the cell’s DNA to produce proteins that have specific jobs. With vitamin D’s influence, intestinal cells produce proteins that greatly increase the transport and absorption of calcium into the bloodstream. Bone, kidney and parathyroid gland cells use vitamin D3 to regulate calcium and phosphorus balance for bone health. Vitamin D receptors are present throughout the body, in the brain, heart, colon, skin, prostate, and breast tissues. They are also found in blood vessel linings (the endothelium), and the pancreas. So, vitamin D3 profoundly influences the health of the cardiovascular, nervous, digestive, blood-sugar balancing systems, and female and male hormonal stability. Vitamin D is a powerful immune booster: it activates macrophage white blood cells and other key immune cells, when it binds to its immune system receptors. The human genome has revealed more than 2,700 binding sites for active D3; these receptors are located near genes that are involved in virtually every known major disease of humans.

Vitamin D is made in our skins when UVB ultraviolet light from sunshine converts a cholesterol derivative called 7-dehydro-cholesterol, into cholecalciferol. This can occur after minutes of sun exposure, but the cholecalciferol may only last for hours or a few days at most.
Although sunlight absorbed through the skin triggers vitamin D synthesis, in many climates there simply is not enough ultraviolet, because of the angle of the sun. In sunny locations such as southern California, Hawaii, Mexico, Australia, or Africa, the skin can make high amounts of vitamin D3, if there is skin exposure outdoors, hence vitamin D is sometimes referred to as the ‘sunshine vitamin.’ However, without sufficient sun exposure in a hot climate, we cannot make adequate vitamin D in our skin. Sunscreen prevents vitamin D formation as it blocks UVB, but we need that protection! In northerly American states and Canada, including regions such as Washington, British Columbia, New England, and northern Europe and Scandinavia, the sun is weak and we make virtually no vitamin D in our skin in fall, winter or spring, and only minimal amounts in the summer.

Most people need sufficient vitamin D3, either from a supplement or sun exposure, to achieve healthy blood levels of 60-100 ng/mL. Only after taking a daily supplement for 4 to 6 weeks is the blood vitamin D3 level stable enough to be measured. Even in a temperate climate, blood levels may only increase by 5 points during the summer, so people generally need to continue supplementation all year.

It is nearly impossible for us to receive enough vitamin D3 from foods as it is naturally present in only tiny amounts in very few foods, such as oily fish or mushrooms.

Hence vitamin D deficiency is very prevalent, and pretty well guaranteed in northerly climates or the lower southern hemisphere, and in people who wisely use sunscreen. Increasing research reveals that vitamin D3 deficiency may affect more than half of the North American population. This may underlie many chronic degenerative diseases. In a 2011 estimate by the Centers for Disease Control, at least 25% of Americans were found to be at risk for vitamin D inadequacy with 8% probably suffering overt deficiency.

Older people are at higher risk for vitamin D deficiency. They have less ability to form cholecalciferol in their skin with sunlight, and they may not absorb dietary vitamin D3 well. Also, they may make less of the active 1,25 form because of reduced kidney function. In South Florida, up to 40% of people over age 65 are lacking vitamin D in their systems.2

Some of the earliest reports of vitamin D3 deficiency came from California where, despite the sunshine, children were found to be developing rickets. Either they used sunscreen or rarely played outdoors and so their skin did not even make enough vitamin D3 for proper bone mineralization and development.7

Accurate supplementation is a highly cost-effective way to very significantly reduce disease risk and live a healthier and longer life.

Vitamin D3 is an important fat-soluble nutrient. It naturally occurs in oily fish such as salmon, mackerel and trout. Because vitamin D3 is transported in fats, the absorption of vitamin D is greatly enhanced in the presence of an oil base or fatty carrier.

Very importantly, when it comes to the dosing of vitamin D3 supplements, there is no standard dose: It is extremely important to determine the amount that a person needs to reach a healthy and effective blood level. Each of us has an individual dose requirement that depends on our absorption and how fast our body clears vitamin D. The daily dose required is the amount needed to reach the standard target blood level after 4 to 6 weeks.

With our patients, our aim for peak daily health is to attain a blood level between 60 to 100 ng/mL. Recent research indicates that 70 to 85 may be ideal to receive the maximum reduction of risks of all ailments that vitamin D3 helps to prevent. The Vitamin D Council (VDC) is a non-profit organization of medical professionals and vitamin D researchers whose goal is to educate professionals and the public on the benefits of vitamin D and the risks associated with deficiency. The VDC recommends blood testing and dosing to achieve a level up to 80 ng/mL.

Because of its wide-ranging effects on many tissues, and its actions as a prohormone building block for numerous critical metabolic functions, the list of clinical benefits for vitamin D3 is long. Research strongly confirms vitamin D3’s many helpful actions, over the short and long term.

A landmark April 2014 study published in the British Medical Journal analyzed the results of double-blind trials with more than a million people, conducted through leading universities including Harvard and Oxford. The results indicated that low vitamin D3 blood levels were linked with a 35% increased risk of death from heart disease, and a 14% greater likelihood of death from cancer. The overall risk for developing cancer, multiple sclerosis, cardiovascular disease, diabetes, asthma, or autoimmune disorders was doubled for people with poor vitamin D levels. The researchers estimated that roughly 13% of all deaths in the United States could be attributed to low vitamin D levels.1

Research in 2011 determined that higher vitamin D3 levels may cut the risk of getting colon or prostate cancer by 50%. In addition, a stunning 25% of breast cancer deaths in northern European women may be attributed to inadequate vitamin D levels. Adults who took D3 for three years or longer had an 11% reduction in mortality from all causes. Only vitamin D3 had these benefits, the D2 form had no effect.3

We explain to patients that the quality of a vitamin D3 formula matters a great deal. Vitamin D is a fat-soluble nutrient, and it needs to be in an oil base for best absorption.

In our clinic, we see consistently excellent results for vitamin D3 uptake if it is in a formula incorporating either vegan medium chain triglycerides, or fish oil with omega-3 fatty acids including DHA docosahexaenoic acid and EPA eicosapentaenoic acid. To maintain freshness and maximum stability, we also prefer a blend that includes vitamin E as an antioxidant, ideally as natural d-alpha tocopherol or mixed tocopherols.

We recommend a blood level of 60-100 ng/mL all year. With this, our patients enjoy fewer colds and flu’s which clear up faster, less ‘winter blues,’ fewer joint pains, and increased energy. Some call their vitamin D3 a ‘happy pill’ as they are feeling more vibrant and energized with peak daily health. In addition, our patients are glad to know that they are reducing their long-term risks of developing multiple sclerosis, which around 2008 was one of the first disorders found to be reduced by vitamin D3, as well as Parkinson’s disease, diabetes, asthma, and heart disease, as well as colon, breast, or prostate cancer.

Recommendation: Vitamin D3 as cholecalciferol, in an oily or fatty base with either vegan medium chain triglycerides, or fish oil omega-3 fatty acids including DHA and EPA, also with including vitamin E as d-alpha or mixed natural tocopherols to preserve freshness. Vitamin D3 should be taken with any meal that includes fat or oil, for peak absorption. The dose required is that which is needed to attain a blood level of 60-100 ng/mL after 4 to 6 weeks of taking it daily. For most people that daily dose may be in the 4,000 to 8,000 IU range, but it could be higher or lower. Checking your blood level is essential to confirm the correct dose: follow the directions of your healthcare provider.