For DEEP IMMUNE SUPPORT, evidence confirms that iron is fundamental for normal immune function and development. It is necessary for healthy maturation of lymphocyte immune cells, and for a balanced gut microbiome which strongly influences immunity. The chelate form, especially iron bisglycinate, is most effective for rebuilding the body’s iron stores. Iron is essential for red blood cells, which are key to strong immune activity. Also, iron has a direct role in the immune system’s ability to vanquish infection or clear damaged cells. 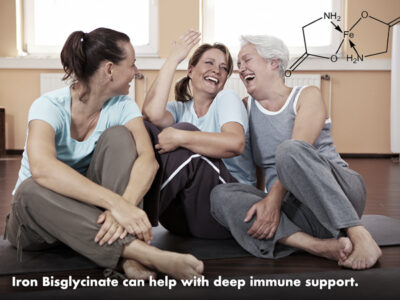 Research in recent decades overwhelmingly shows that iron deficiency impedes the body’s ability to mount an adequate immune response. It has long been recognized that low iron status can increase susceptibility to infectious disease. Conversely, infection and inflammation can disrupt iron balance in the body.1, 2

Metal ions, like the mineral iron, are crucial components of all living organisms and essential to maintain life. Iron, specifically, is required by most organisms as an essential cofactor in numerous important biochemical reactions of immune and non-immune cells. But iron can also be used by pathogens. Thus, a careful balance of iron in the body must be finely regulated to protect the host and deprive unwanted invaders of iron.

The links between iron’s roles, immune function, and risk of infection have been recognized since the 1970s:

Iron is crucial in red blood cells and in muscle cells, which all store oxygen. It also has key roles for energy production enzymes and for DNA formation. In the human body, much of the iron entering the circulation is recycled from aged red blood cells; a smaller amount is absorbed from the diet. When old red blood cells die, the body usually retrieves their iron, and recycles it into the next generation of red cells. If this retrieval process fails, the levels of iron and of its storage protein ferritin both drop. This happens faster if blood loss outstrips the amount of iron ingested; anemia with low hemoglobin can follow.

Studies indicate that low iron can influence the course of infection in one of two ways: directly by impeding the body’s control of bacterial multiplication. In this case, alterations in the expression of molecules that transport or seize iron can have direct effects on pathogen growth. Secondly, poor iron indirectly leaves the immune system less able to mount an effective inflammatory response to defend against pathogens.3

Good iron availability plays an important role in healthy immune function and calming chronic inflammatory conditions. Iron-chelating molecules have a pivotal place in keeping iron levels stable. Iron sequestration is a strategy used by the body to restrict pathogen proliferation. Macrophages play a central role in this process, as they are involved in removing aged red blood cells to recycle iron. Under healthy inflammatory conditions, macrophages retain iron in ferritin. At the same time, iron export is inhibited due to inflammation-mediated events and release of a substance called hepcidin. Hepcidin binds to the iron-export protein ferroportin and breaks it down, to starve pathogens of iron.4

If iron supplements are not in an absorbable form, iron can pass through the intestine without being assimilated, and enter the colon where pathogenic bacteria utilize it for growth. The vast majority of microbes in the gut require iron for growth, and they have formulated many strategies to acquire this nutrient. Noxious bacteria make use of a continuous supply of micronutrients, including iron, for metabolism and replication. There is constant competition for iron between various bacteria.

A 2019 study investigated the effect of iron availability on human gut microbes. This in vitro study found that chelating iron to decrease its availability cut the abundance of pathogens within the gut bacterial community. Pure culture studies with pathogenic bacteria confirmed this observation. Taken together, these data suggest that undigested iron could feed potentially pathogenic bacteria within the colon. The findings highlight the necessity for well-absorbed iron. The relationship between iron availability and the human gut microbiome is still being discovered, and ongoing research will clarify improved methods for maintaining gut microbial homeostasis.5

In our clinic, we find that iron in a chelate form such as bisglycinate has major advantages over other formulations of iron. It is almost always non-constipating, and very rarely affects the frequency or texture of bowel movements, even for patients with a history of slow digestion or chronic constipation. Secondly, the iron is in a chelate form, attached to a derivative of the amino acid glycine, which is a protein building block, and so the body easily recognizes the combination. Iron chelates are especially well absorbed, far better than inorganic sulfate. This prevents colon pathogens from taking up iron, and leads to better hemoglobin and ferritin formation, and more effective immune boosting. We track our patients’ iron store by measuring blood levels of ferritin. If ferritin levels are low, only a highly absorbable iron will help, or months of supplement-ingesting would be ineffective. We aim for blood levels between 45 to 150 ng/mL.

Recommendation: Iron bisglycinate or chelate 25mg one to three times daily, with any meals, or as directed by your healthcare provider. The absorption of iron is gently enhanced in the presence of a mild food acid, such as citrus or balsamic vinegar.