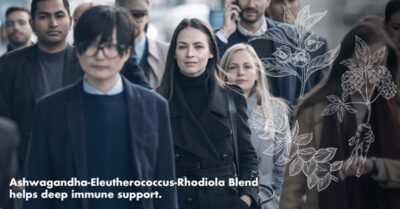 Adaptogens are plant-derived compounds that increase the activity of specialized white blood cells called natural killer cells. These immune cells fight infection, decrease the intensity of inflammation, and patrol the body for abnormal cells that need to be removed.

Ashwagandha is one of the most important medicinal herbs in Ayurveda, the traditional Indian holistic medical system based on body type. Ashwagandha has long been used as a “Rasayana” or rejuvenator. Classified as an adaptogen, it has been valued for over 3,000 years for its deep immune-boosting abilities. Its botanical name is Withania somnifera, and it is also known as Indian ginseng and winter cherry. The root smells like horse or “ashwa” which gives this herb its name: Consuming it is said to imbue one with the power of a horse. Extracts from the plant’s root or leaves are used to treat a variety of conditions including poor immune responses, low thyroid and related immune impairment, and inflammation.

Clinical research confirms that ashwagandha can increase the body’s first line of defense: white blood cells. This herb has been extensively researched for its ability to stimulate immunity, battling both bacterial and viral infections.

Eleutherococcus, a member of the ginseng family, is a time-honored adaptogenic herb that was first used as an herbal remedy in China some 2,000 years ago. Supplementing with eleutherococcus has been shown to boost immune function and especially antibody production, both before and during illness.2

By enhancing the immune system, eleutherococcus may improve or speed up the healing process. Many beneficial phytochemical compounds, the medicinal components of plants, are found in eleutherococcus root, including saponins, lignans, coumarins, and flavones. Several studies have shown that eleutherosides in this herb can help to maintain healthy T4 lymphocytes, important immune cells.3,4

In addition to its potential to enhance immunity, eleutherococcus can weaken pathogens that manage to enter the body. Researchers measured antiviral activity of eleutherococcus and found that it inhibited virus replication in cell cultures, preventing viral spread.5 In the body, eleutherococcus is measurably effective as a treatment for the common cold. It shows strong antioxidant activity, helping the body recover more quickly after infection.6 For deep immune function, eleutherococcus is also a potent adrenal supporter. This encourages optimal thyroid function, which is essential for efficient immune system activity.

Rhodiola, also known as golden root, has been used in traditional medicine for centuries in Europe and Asia. Its root contains more than 140 active ingredients, the two most potent of which are rosavin and salidroside. Rhodiola rosea extracts are unique chemopreventive agents, which not only have anti-cancer and anti-inflammation activity, but also strengthen normal physiological functions, such immunity, the stress response, and DNA repair.

In our clinic, we recommend ashwagandha, eleutherococcus, and rhodiola for low white blood cell counts, frequent sinus or respiratory infections, and for patients with higher risks of auto-immune disorders or who have abnormal cells, such as in a Pap smear or colonoscopy. We also encourage these adaptogenic herbs for a sluggish thyroid: improved thyroid activity strongly supports healthy immunity.

Recommendation: A formula including a daily dose of: Ashwagandha root extract (3.5% with anolides) 100mg; Eleutherococcus Senticosus (20:1) 50mg; Rhodiola rosea extract (3% rosavins, 1% salidroside) 200mg; with Vitamin C, buffered (ascorbate) 500mg; Vitamin B5 (calcium pantothenate) 100mg; Vitamin B6 (pyridoxal-5-phosphate) 50mg. Optional supportive ingredients could include: Astragalus root 150mg, Panax Ginseng extract (10% ginsenosides) 100mg, and Schizandra berry 75mg. This formula should be taken with breakfast or lunch, or divided between each of these meals, or as directed by your healthcare provider.