Beauty is helped by Coenzyme Q10 with Lipase

For BEAUTY, Coenzyme Q10 with Lipase is a beneficial antioxidant that evens skin tone, reduces sun damage, and improves skin hydration. It protects collagen and elastin, the main structural support proteins in the skin matrix. This maintains the skin’s strength and elasticity, for a smoother, more youthful texture. CoQ10 boosts cellular energy for improved skin cell metabolism and repair. It also increases whole-body stamina and exercise capacity, which enhances beauty by improving muscle tone and better clearing of the body’s waste. CoQ10 effectively neutralizes free radicals that could age the skin, and it reduces the damaging effects of external stressors like sunlight and pollution. 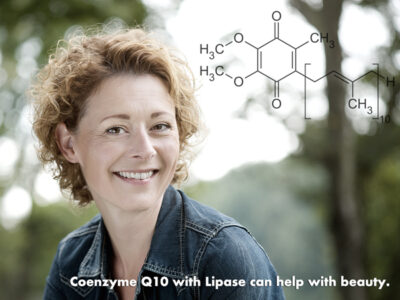 CoQ10, or ubiquinone, is a powerful biologically active molecule, a fat-soluble antioxidant and organ protector, produced naturally in the human body. It is found in the mitochondria of every cell and tissue. The name ubiquinone stems from its ubiquity.

CoQ10 has several vital biological functions: it is required to produce energy from carbohydrates and fat, to neutralize free radicals, and for healthy new cell growth for example in the skin and gums. After the age of about 40, the body’s ability to synthesize CoQ10 from food declines, and a deficiency may develop. With aging, fibroblasts in the skin which make essential support fibers, can develop mitochondrial dysfunction, which reduces their production of fibrous material to support the skin. Stress slows down the CoQ10 creation process: Supplies diminish, contributing to lower energy levels and a slower metabolism.

As aging and stress lower the body’s levels of CoQ10, then the ability of cells to regenerate declines. A downward spiral develops as weaker cells become less able to utilize coenzyme Q10 effectively. Declining CoQ10 levels are one of the most accurate biomarkers of the aging process. Although CoQ10 is found in meat, fish and whole grains, these foods do not contain enough CoQ10 to meet the body’s needs.

Skin is a living, breathing organ with the brilliant ability to regenerate and repair itself. As the body’s largest organ, it is part of a very complex inter-related system. The skin’s supportive connective tissues largely consist of two key proteins: elastin, a spring-like protein that gives its skin elasticity; and collagen, a fiber-like protein that strengthens the skin. These proteins are the building blocks of the skin matrix: If they are damaged, the skin suffers becoming dry and inelastic, subsequently developing wrinkles easily.

The enemies of elastin and collagen are free radicals, electron-hungry molecules that attack these proteins and “steal” electrons, causing them to lose shape. As we age, free radicals take an increasing toll on collagen and elastin in the skin, and it loses its youthful contours, resiliency, and strength.

Free radicals are unstable molecules that form when atoms or molecules gain or lose electrons. They are naturally produced as waste during normal metabolic processes, such as clearing cellular waste, exercise, mounting an inflammatory response; or from exposure to external environmental sources such as air pollutants, drugs, and industrial chemicals. Their concentrations are increased by environmental factors such as UV light, radiation, pollution, smoking, and poor diet.

Unstable free radicals, including reactive oxygen species, have unpaired electrons: They roam the body seeking other atoms or molecules to bond to. If they attach to tissues, these rogue free radicals can cause injury called oxidative stress to cells, lipids, proteins, and DNA. Ongoing oxidative stress can bring lasting damage to skin, muscles, organs, and cells. Eventually this results in symptoms of aging such as wrinkles, slower metabolism, and degenerative disorders. By the middle twentieth century, one of the leading theories of impaired cellular function and aging proposed that free oxygen radicals cause chronic oxidative stress, which leads to permanent tissue damage.

Antioxidants such as coenzyme Q10 are natural substances that shield all tissues from scavenging free radicals, reduce oxidative cell injury, and quench harmful peroxides that damage lipids. Antioxidants boost our cellular levels of glutathione and superoxide dismutase and catalase enzymes, which protect against oxidative damage. These enzymes block assault on cells from reactive oxygen species and superoxide that form during metabolism. Higher tissue levels of antioxidants also offset environmental free radical injury to skin from sun or pollutants, and they are protective against many chronic ailments including heart disease, diabetes, cataracts, macular degeneration, and arthritis.

Antioxidants play a potent role in boosting radiant natural beauty, by scavenging free radicals, thus protecting the integrity of the skin, eyes, and internal organs. Antioxidants help to reduce the signs of aging, wrinkles, and sun damage, and to enhance a smooth, youthful complexion.

A balance between free radicals and antioxidants such as CoQ10 to neutralize them is necessary for natural beauty and healthy physiological function. Free radicals are constantly produced, and the body normally makes ample antioxidants to handle them. But if the number of free radicals overwhelms the body’s innate antioxidant mechanisms to disempower them, then tissues can be overcome and injured by oxidative assault. This damage is called oxidative stress. Eventually this results in permanent skin degradation, lines and sagging, slower metabolism, tissue breakdown, and wrinkles. If oxidative damage is not curbed, flabby and drooping tissues, fluid retention and puffy eyelids, brittle hair, and higher risks of degenerative disorders can follow.

CoQ10 has widespread health benefits because its potent antioxidant effects shield tissues throughout the body from free radical injury. As the only fat-soluble antioxidant present in all cell membranes, CoQ10 protects the fatty layers of membranes, as well as DNA. CoQ10 is a powerful weapon preventing the generation of reactive oxygen species, which can cause tissue damage, loss of skin and muscle quality, dull eyes and hair, and higher risk for chronic degenerative diseases.8

“Coenzyme Q10 enhances energy and supports vitality and beauty via its major role in energy production on a microscopic level within cells, delivering a boost which people can feel.”

Doctors and research clinicians find that this fat-soluble antioxidant contributes up to 95% of the body’s energy output.

Coenzymes of many kinds support enzymes in their various biochemical activities. CoQ10 is a crucial cofactor in the electron transfer chain of chemical reactions that release energy within every cell. It occurs in higher concentrations in the kidneys, liver, and heart, partly because they have higher energy requirements.

Within the mitochondria, which are organelles in every cell that generate energy, CoQ10 plays a key role in the Krebs cycle. During the final stages of food breakdown, energy is freed via the electron transfer chain from the chemical bonds of the food. This produces adenosine triphosphate (ATP), a molecule that cells use as their main power source. As part of the last phase of liberating energy from food, CoQ10 enhances ATP production, boosting the amount of energy available.

The skin is highly dependent on CoQ10, as its cells have high metabolic rates and require ample energy resources to nourish themselves, make new tissue, and remove waste. As CoQ10 enhances energy production, it can improve the repair of skin lesions and blemishes, enhance tissue quality, and elevate exercise capacity for a stronger, leaner physique.

Research confirms the many beauty-enhancing benefits of coenzyme Q10: Since its discovery in 1955, CoQ10 has been the subject of much clinical research. Peter Mitchell, a British biochemist, received the Nobel Prize in Chemistry in 1978 for illuminating how biological cellular energy cell transfer occurs with CoQ10. A comprehensive review published in the Slovak Republic looked at the nourishing actions of CoQ10.1 This review covered the history, biology and more than 81 studies that confirmed its energy production roles, antioxidant activity, and immune support benefits. Each of these contributes to smoother skin; fewer pimples or blemishes; better cell function, skin repair and hair growth; greater stamina for beautifying exercise.

Coenzyme Q10 has significant anti-aging actions. The recent information about how nutrition can reduce skin aging began in earnest around the year 2000. An increase in peer-reviewed scientific journal reports included biochemical and molecular mechanisms of action for various nutrients including CoQ10. Both topical administration absorbed through the skin and oral consumption of nutritional supplements are now commonplace. Many journals report significant improvement for both on a variety of dermal parameters.2 Reduced wrinkles, less sagging, and increased radiance can result from consistent CoQ10 use.

Research in 2002 examined how coenzyme Q10 shields fatty acids from degradation. Preserving the integrity of essential fats and reducing oxidative injury to DNA will improve skin quality, retaining its moisture, softness, and youthful texture. Since CoQ10 is the only lipid-soluble antioxidant present in all membranes, its protective effect extends to lipid-protein complexes and to DNA. This is possible because CoQ10 can get close to cell mitochondria to neutralize oxidative events.3

A fascinating study published in the Federation of American Societies for Experimental Biology journal documented how skin fibroblast cells decline with aging. The trial looked at human fibroblasts collected from 55 subjects ranging in age from babies to patients 103 years old. It presented a comprehensive analysis of the age-related biochemical and bioenergetic changes in skin cells. The study concluded that fundamental mitochondrial processes deteriorate with aging in human skin fibroblasts, starting around 40 years of age. The root cause of this deterioration is reactive oxygen species (ROS), free radicals which inflict aging-dependent damage to DNA, proteins, and lipids, ultimately leading to nuclear damage.5  Because CoQ10 can antidote oxidative injury, it can preserve normal skin cell proliferation and thus enhance beauty.

Lipase is an important type of fat-digesting type of enzyme that boosts the assimilation of CoQ10, bringing more of its many benefits for energy production, cell repair, and beautiful skin and hair. Naturally made by the pancreas, lipase is the main enzyme that breaks down the triglyceride fats found in our diets into monoglycerides and pairs of fatty acids. Lipase actually comprises a group of enzymes that are essential for digesting triglycerides, fats, and oils that we eat, and transporting them into the bloodstream, and then into tissues where the fats are needed. A spectrum of lipase enzymes in the human gut work in a wide range of pH environments from the saliva down to the small intestine. By facilitating a correct balance of fat absorption and use by cells, lipase is essential for strong cell membranes, and a lively metabolism.

Because Coenzyme Q10 is highly soluble in fat, its absorption is greatly improved by lipase. CoQ10 tends to be poorly assimilated from the gut, because it is a large molecule that only dissolves well in lipids, but not in water. When combined with lipase that is identical to the body’s own fat-digesting enzyme, CoQ10 is carried efficiently from the intestine into cells along with dietary fat, for maximum absorption.6

In our clinic, we prefer a formula with an unusual combination including lipase. The plant-derived form of lipase is identical to the body’s own fat-digesting enzyme for peak CoQ10 assimilation.6  Our patients taking a CoQ10-lipase blend regularly notice smoother skin, anti-aging effects, less sun damage, and better gum health. They also report improved energy and exercise capacity, easier attainment of a target weight, and more toned body contours.

CoQ10 is best taken with meals that include fat or oil, as it is significantly better absorbed in the presence of fats. We look for a Coenzyme Q10 that is combined with lipase, which can give a 50% boost to the amount of CoQ10 that reaches the body. This means that a dose of 100mg CoQ10 can deliver the benefits of 150mg when partnered with lipase, so we prefer the two together.

Recommendation: A daily dose of Coenzyme Q10 (as ubiquinone) 100mg, with Lipase 300 FIP, and optional Vitamin E (in the d-alpha form to maintain freshness) 50 IU. Take once or twice daily, with any meal including fat or oil, or as directed by your healthcare provider.