Athletic Performance is helped by Vitamin D3, in natural oil base 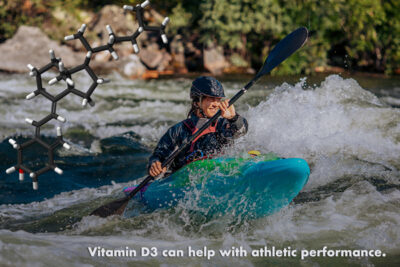 One of the key tenets of athletic training is to push beyond the body’s current limits, to disrupt the status quo, then to allow the body to bring about muscle repair and remodeling that improves performance. Based on live trials and in vitro biology studies, vitamin D plays a beneficial and functional role for healing the mild tissue damage caused by training. Two important, randomized controlled trials showed better recovery from the physiological stress of exercise when subjects had higher serum levels of vitamin D3.2,3

Many of the newly identified functions of vitamin D3 have relevance for athletic performance, and vitamin D has found a spotlight in the world of sports nutrition. Technological advances have illuminated the importance of vitamin D in our endocrine system, and its biological significance has grown exponentially. The numerous benefits of vitamin D3 for athletic achievement include:

Unlike other vitamins, vitamin D3 is technically a hormone, defined as a substance made by a gland or organ in the body that travels in the blood to regulate its target tissues. Vitamin D may be one of the oldest hormones that exists on earth. Vitamin D was long recognized for its role in bone health since it was discovered as the cure for rickets in the early 1900s.

Evidence supports the many roles of this crucial vitamin, in addition to its classic effects on calcium and bone health. Vitamin D3 also eases joint and connective tissue inflammation, and it is needed for cell growth and neuromuscular function. Low D3 levels are associated with increased autoimmunity and susceptibility to infection. It achieves all this because it has key roles in many metabolic processes, not because it is a panacea.

Vitamin D3 works by entering cells and attaching to vitamin D receptors, which are within the cell nuclei. The human genome has more than 2,700 binding sites for active D3; these receptors are located near genes that are involved in virtually every known major disease of humans. Once vitamin D3 locks into its receptor, the combination stimulates the cell’s DNA to produce proteins that have specific jobs. Intestinal cells produce proteins that greatly increase the transport and absorption of calcium into the bloodstream. Bone, kidney, and parathyroid gland cells are activated by vitamin D3 to regulate calcium and phosphorus balance for bone, heart, and muscle health. Vitamin D receptors are present in the brain, heart, colon, skin, prostate and breast tissues; also in blood vessel linings (the endothelium), and the pancreas. Vitamin D is a powerful immune booster: it activates macrophage white blood cells and other key immune cells, when it binds to its receptors.

In sunny climates such as south California, northern Australia, Hawaii or Mexico, the skin can make high amounts of vitamin D3 from a cholesterol derivative in response to direct exposure to ultraviolet light. Hence vitamin D is sometimes called the “sunshine vitamin.” However, in many climates there simply is not enough ultraviolet light because of the sun’s angle, and prolonged sun exposure carries health risks.

In northerly American states and Canada, including regions such as Washington, British Columbia, New England, and northern Europe, Scandinavia, and southern New Zealand, the sun is weak and people make no vitamin D3 through their skin during the fall, winter and spring, and barely any even in mid-summer. Hence, vitamin D deficiency is very prevalent, maybe affecting half of the North American population. In a 2011 estimate by the Centers for Disease Control, at least 25% of Americans were at risk for vitamin D inadequacy and 8% were at risk for vitamin D deficiency. Increasingly people are seeking supplements: the dose required is the daily amount needed to reach a target blood level of 60-100 ng/mL after 4 to 6 weeks.

Vitamin D3 is an important fat-soluble nutrient, but it is nearly impossible for us to receive enough vitamin D3 from our diet. Only minimal amounts are naturally found in very few foods, such as oily fish like salmon, mackerel and trout, or mushrooms. Because vitamin D3 is transported in fats, the absorption of vitamin D is greatly enhanced in the presence of an oil base or fatty carrier.

Most people need sufficient vitamin D3, either ingested or from sun exposure, to achieve healthy blood levels of 60-100 ng/mL. We generally need to continue supplementation all year as even in temperate climates, blood levels may only increase by 5 points during the summer.

Researchers in 2015 further investigated whether vitamin D3 intake can improve skeletal muscle function and strength, in frail vitamin-D insufficient individuals during athletic training. They tested 40 untrained young men and elderly men who received either vitamin D3 and calcium, or calcium alone as the placebo group over 16 weeks. During the last 12 weeks of the supplementation the subjects underwent progressive resistance training.  In the vitamin D group, serum concentration increased and was significantly different from placebo in both young men and elderly men. The muscle quality in elderly men and fiber type morphology in young men were improved, although whole muscle hypertrophy or muscle strength did not appear to show an additive effect of vitamin D3 intake during the 12 weeks of resistance training. This indicated a beneficial effect of vitamin D on skeletal muscle remodeling.4

A 2011 meta-analysis of several vitamin D3 studies consistently demonstrated increased muscle function and strength in elderly populations. One theory for the seemingly greater benefit may be that muscle improvements are more striking in populations with poor muscle quality, as is more prevalent in older people. Younger highly trained athletes tend to experience more subtle though still significant improvements with vitamin D3.5

Many studies suggest that vitamin D3 can dampen excessive inflammation and tissue damage that results from intensive exercise.6  Vitamin D3 has key functions for optimal immune system health, and it maintains a balance between inflammatory cells and immunosuppressive cells.  Overall, vitamin D reduces inflammation and infection risk, so that minor athletic injuries are more likely to heal faster and more completely. Vitamin D3 is needed for adrenal gland and endocrine function, supporting release of the correct amounts of cortisol, for better tissue repair and steady stamina and blood glucose.

Because of its wide-ranging effects on many tissues and its actions as a prohormone building block for numerous critical metabolic functions, the list of clinical benefits for Vitamin D3 is long. It can significantly reduce the risks of many serious chronic disorders, including depression, recurring infections, diabetes, cardiovascular disease, asthma, breast and colon cancer. It is a major immune booster too, but it will only bring these benefits if blood levels are sufficient.

Very importantly, there is no standard vitamin D3 dose: Each of us needs an amount that depends on absorption and how fast our body clears vitamin D. With our patients, for peak athletic performance we aim for a blood level between 60 to 100 ng/mL. Recent research indicates that 70 to 85 may be ideal. The Vitamin D Council (VDC) is a non-profit organization of medical professionals and vitamin D researchers, whose goal is to educate professionals and the public on the benefits of vitamin D and the risks associated with deficiency. The VDC recommends blood testing to achieve an optimal level. The daily dose required is the amount needed to reach a target blood level of 60-100 ng/mL after 4 to 6 weeks.

The quality of a vitamin D3 formula matters a great deal: As vitamin D is a fat-soluble nutrient, its absorption is enhanced in an oil base such as vegan triglycerides or fish oil. In our clinic, we see excellent results if a vitamin D3 formula includes the vitamin E family, or d-alpha tocopherol in its natural form, to preserve freshness. Our athletic patients on ample vitamin D3 consistently tell us that that they notice faster muscle repair after injuries, less soreness after exercise, and sometimes increased stamina while training.

Recommendation: Vitamin D3 as cholecalciferol, in an oily or fatty base with either vegan medium chain triglycerides, or fish oil omega-3 fatty acids including DHA and EPA, also including vitamin E as d-alpha or mixed natural tocopherols to preserve freshness. Vitamin D3 should be taken with any meal including fat or oil, for peak absorption. The dose required is that which is needed to attain a blood level of 60-100 ng/mL after 4 to 6 weeks of taking it daily. For most people that daily dose may be in the 4,000 to 8,000 IU range, but checking your blood level is essential to know for sure, or follow the directions of your healthcare provider.