For ATHLETIC PERFORMANCE, slow-release melatonin exerts powerful benefits: It boosts growth hormone which can speed muscle recovery, and it supports adrenal function for optimal cardiovascular function, blood pressure, and stamina during exercise. Melatonin can reduce inflammation and oxidative damage to muscles and connective tissues. By helping sleep, it allows more time for the body to repair after training. In addition, melatonin enhances calming neurotransmitters improving mood and ability to manage stress. 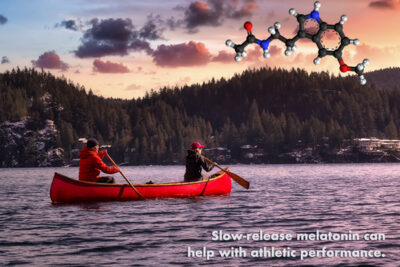 Melatonin is an indoleamine neurotransmitter that functions like a hormone and a neurotransmitter. It has key roles in regulating the neuro-immuno-endocrine system of the human body. This is a ‘super-system’ that includes the three major adaptive body systems–nervous, endocrine, and immune–that operate in constant communication and collaboration, for optimal physiological function and defense. Melatonin is made from tryptophan, an essential amino acid, and secreted by the pea-sized pineal gland in the brain. The synthesis and release of melatonin in the body surges with darkness, and it is suppressed by light.

Melatonin acts on MT-melatonin receptors in the hypothalamus deep in the brain, where the body’s master circadian clock regulates sleep-wake cycles and diurnal circadian rhythm. This is a rhythm in which energy, adrenal function, and other physiological activities have specific timing and cycles over 24 hours. The circadian clock synchronizes the secretion of many hormones, adrenal activity, the daily rhythm of blood pressure regulation, reproductive and ovarian physiology, and immune function. In addition, melatonin also enhances the effects of gamma-amino butyric acid (GABA), a calming neurotransmitter, thereby lifting mood.
A great deal of previous research focused on the amount of sleep considered sufficient to achieve optimal athletic performance. Sleep was seen as an important restorative circadian process, adequate sleep was noted to reduce injury rates, to optimize recovery and athletic performance, and to lower rates of infectious illness.1,2 There was limited evidence, however, to show the negative influence of sleep deprivation or disturbance, or circadian desynchrony–meaning an abnormal sleep-wake pattern with sleeping at other times of day–on athletic performance.3

Despite this limited evidence, professional sports coaches in the early 2000’s began to put increased pressure on medical practitioners to prescribe sleep medications to athletes. This was a disconnect between evidence and practice back then. There also arose concerns about of the “hangover” effects of sleep medications, which caused notable drops in alertness, reaction time and short-term memory, even if there was no improvement in subjective sleep quality.4

However, studies since 1999 show that melatonin provides myriad performance-enhancing benefits beyond promoting sleep. It increases antioxidant activity, and has anti-inflammatory characteristics, reducing inflammation markers measured in professional athletes during intense training. Melatonin brings immune support, cardiovascular protection, and obesity prevention: it encourages more lean body mass, muscle, and bone density. With so many applications for improving athletic achievement, it is apparent why scientists have taken a more in-depth look at melatonin.

Melatonin enhances exercise recovery by boosting growth hormone. After exercise, as well as during sleep, growth hormone is naturally released to promote muscular repair and growth, and to increase fat burning. Melatonin decreases the secretion of a hormone called somatostatin or growth hormone-inhibiting hormone, which in turn allows higher levels of beneficial growth hormone.

One important early study in 1999 showed that 5mg of melatonin taken one hour before completing a short bout of moderate-intensity cycling exercise resulted in a 72% increase in peak growth hormone release, compared to a placebo.5 A 2007 study from Baylor University looked at trained men who received 5mg of melatonin one hour before a leg workout: These athletes had a doubling of growth hormone levels, before and after training, compared to subjects who received a placebo.6

Research clearly shows that melatonin is one of the body’s most potent antioxidants: It clears or disempowers free radicals such as superoxide, a major one of the set of reactive oxygen species that form in cells during metabolism and increase with stress. Melatonin as an antioxidant has a key role in protecting tissues from oxidative damage due to free radicals produced during intense physical exercise. Excessive levels of free radicals increase the risk of cell damage from oxidative stress, such as slowing the metabolism, inability to remove cellular waste, and lipid peroxidation injury to fatty cell membranes.

Intense physical exercise promotes the production of free radicals leading to increases in oxidative stress. The body adapts to this oxidative stress by boosting each cell’s innate protective superoxide dismutase and catalase enzymes, antioxidants which can neutralize or block cell damage from free radicals. Upregulating the antioxidant defense system during exercise recovery, then trains the efficiency of the body’s antioxidant responses to provide increased cell protection during subsequent exercise workouts. Higher tissue levels of antioxidants are protective against many degenerative conditions, including muscle and heart disease, arthritis, and skin damage.

In addition, melatonin curbs inflammation caused by prolonged and intense exercise. Athletic training signals the body to release inflammatory proteins called cytokines that can promote muscle damage and lead to muscle soreness. A 2011 study published in the Journal of Pineal Research examined the effect of melatonin on inflammatory reactions. Highly trained endurance athletes were given a melatonin supplement or placebo, and researchers measured inflammation following intense training. The scientists concluded that oral melatonin during high-intensity exercise is effective for reducing markers of inflammation and thus decreasing tissue damage.8  This research also highlighted melatonin’s capacity for lowering oxidative injury.

A recent 2019 study further confirmed that melatonin supplementation significantly decreases both oxidative stress and inflammatory marker levels in professional athletes during intense training. The study included 81 participants: 66 athletes and a control group of 15 adults who did not practice sports. Biomarkers of inflammation and oxidative stress, body chemicals and molecules, were assessed at the start, and after 30 days of taking melatonin. This study demonstrated how strenuous activity leads to an increase in lipid peroxidation and inflammatory markers, along with a decrease in the body’s innate melatonin. The results showed that taking melatonin reduced the peroxidation of lipids and calmed inflammatory processes, indicating stronger innate antioxidant and defense mechanisms against free radical injury from oxidative stress due to intense physical effort.9

Our athletic patients find that consistently taking melatonin at bedtime not only improves their sleep and rest after heavy exercise, but also helps to improve their speed and endurance, and benefits recovery. In our clinic, we prefer doses of 3 to 6mg of melatonin, in a non-allergenic base such as leucine, an amino acid, which helps with steady, gradual, even absorption. Our patients have found this formulation to be well-absorbed and long-acting, and it does not cause residual drowsiness the next morning.

Recommendation: 3 to 6mg at bedtime, with or without a beverage or small snack, or as directed by your healthcare provider.