Athletic Performance is helped by L-Carnitine 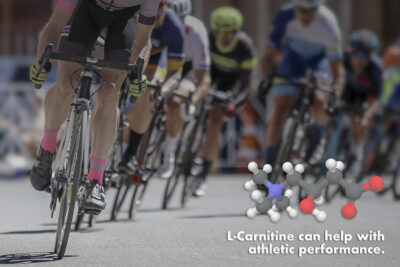 Amino acids are the building blocks from which proteins are made: Carnitine occurs in several natural varieties: propionyl-L-carnitine is one variant that is produced in many tissues. The L-carnitine form has a key role in energy production.

L-carnitine is a mixed amino acid derivative of lysine, an essential amino acid that our bodies cannot make, and a sulfur-containing amino acid called methionine. The name L-carnitine is derived from the fact that it was first isolated from meat or “carnus” in Latin. Since the human body cannot synthesize lysine, it is essential that it is consumed in foods.

We can get small amounts of L-carnitine from our diets by eating meat and fish, but not enough for a therapeutic effect on athletic performance. Vegetarians and vegans can especially benefit from L-carnitine supplements, as can older adults, because carnitine levels in the body decline with age.

In the body, carnitine is found in nearly all cells, but it is concentrated in tissues like skeletal and cardiac muscle that utilize fatty acids as a dietary fuel. Carnitine is responsible for fueling the fires of energy production at the cellular level.

L-carnitine has a powerful role in releasing energy from fat-rich foods. L-carnitine is essential for transporting long-chain fatty acids across mitochondrial membranes. Once inside mitochondria–the tiny powerhouse organelles that generate energy in every cell–fats are broken down to fuel energy production. The human heart muscle gets 70% of its energy from fat breakdown. The boost from carnitine for cardiovascular energy capability translates to better athletic performance.

L-carnitine also has important circulatory benefits, improving the flow of blood through muscles and other tissues to enhance athletic performance. It boosts the production of vascular or cellular mediators such as nitric oxide which open up blood vessels.

Also, L-carnitine encourages peak performance by helping to remove the body’s waste: It transports toxic metabolic breakdown compounds out of mitochondria, to prevent their accumulation.

Sport enthusiasts know that recovery and regeneration matter, and this has resulted in a professional specialty called “regenerative athletics.” The ability to perform at your best is dependent on sound recovery that balances training and competition stressors. Research with athletes confirms the benefits of L-carnitine for training, competition, and recovery from strenuous exercise including regeneration of the tissues post-workout.

An overview of research examining the value of L-carnitine for athletes summarized the following key points:1

Researchers suggested that these effects were due to “enhanced blood flow and oxygen supply to the muscle tissue via improved endothelial function thereby reducing hypoxia-induced cellular and biochemical disruptions.” This means that L-carnitine improves the function of blood vessel linings–the endothelium–leading to increased blood flow, better oxygen delivery to muscles and tissues, and also less disruption of normal cell function that occurs with hypoxia, or lowered oxygen supply.

The researchers then compared their findings with studies of older adults that showed that L-carnitine brought benefits including increased muscle mass accompanied by a decrease in body weight, and it also reduced physical and mental fatigue. This indicates a key role for L-carnitine in maintaining healthy protein status and blood flow, including to the brain, while preventing age-associated muscle gradation. In addition, L-carnitine preserves healthy homeostasis, or biochemical balance, within mitochondria, the powerhouse organelles in cells that generate energy.3,4

An interesting pilot study also in 2018, compared the effects of L-carnitine on metabolic profiles of elite-level athletes. By searching for biomarkers with potential therapeutic implications, the data provided evidence that high-power and high-endurance athletes have a distinct metabolic profile, including: steroid biosynthesis, fatty acid metabolism, oxidative stress, and energy-related metabolites. All of these characteristics are improved or encouraged by L-carnitine supplementation.5

In our clinic, our athletic patients have seen consistent long-term benefits with L-carnitine. People report improved performance and endurance, faster recovery, more efficient muscle building, and less fatigue and soreness after training. These improvements can steadily increase with 3 to 6 or more months of taking L-carnitine.

Recommendation: L-carnitine 1,000mg, one to three times per day, with any meals, or as directed by your healthcare provider.References