For ATHLETIC PERFORMANCE, incorporating green tea extract can boost exercise endurance up to 24 percent. Green tea extract provides antioxidant protection for muscles and tissues under the stress of exercise. It stimulates thermogenesis, the generation of body heat from digestion, absorption, and metabolism of food. Green tea improves insulin sensitivity, and stabilizes blood glucose levels, leading to increased stamina and faster recovery. The ability of green tea extract to stimulate fat utilization and athletic capacity is the focus of a great deal of research from sports physiologists. 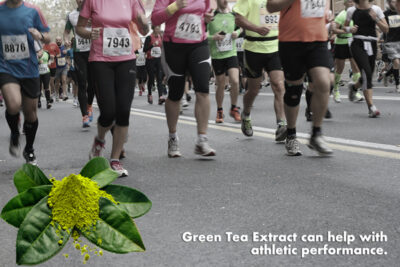 Green tea extract is produced from the lightly steamed and dried leaves of Camellia sinensis, which is one of the most widely consumed beverages in the world. Green tea is extremely high in polyphenols which have impressive medicinal actions. Steaming tea inactivates enzymes in tea leaves that would otherwise degrade and oxidize the medicinal polyphenols. By contrast, oolong or black tea have far less health benefits because the enzymes in un-steamed tea leaves break down therapeutic polyphenols. Archeological evidence suggests that people consumed tea leaves steeped in water 500,000 years ago. Green tea extracts have a long history of use in traditional Chinese and Ayurvedic medicine. Practitioners used green tea for many health conditions such as diuretic actions, regulating body temperature and blood sugar, promoting digestion, and improving mental processes.

For medicinal use however, a standardized extract is far more potent. Green tea extract contains healing polyphenols, including catechin, epicatechin, epigallocatechin gallate (EGCG), epigallocatechin-3-gallate, and proanthocyanidins. Epigallocatechin gallate (EGCG) is a powerful antioxidant compound in green tea that is responsible for its thermogenic properties. EGCG shows antioxidant action both in vitro and in vivo as good as or better than vitamins C or E in many studies.

Green tea extract boosts athletic potential via its powerful antioxidant, energy enhancing, and thermogenic effects. Antioxidants shield cells from damage due to free radicals that are especially generated as by-products of increased metabolism during exercise. Tissues that are protected from oxidative injury can burn fat and carbohydrate fuels more efficiently, have higher metabolic rates, and can more thoroughly remove their waste.

Even better, green tea also stimulates the body’s own antioxidant enzymes in the liver, small intestine, and lungs, making it an outstandingly powerful detoxifier. Greater clearing of the body’s waste through these organs of elimination boosts metabolism and allows the body to achieve more sustained levels of exercise and endurance. Healthy liver function also improves hormonal balance, which further enhances athletic performance. Other helpful compounds in green tea extract include catechins which enhance the immune system, destroy bacteria and viruses, fight inflammation, and regulate the production and activities of hormones. The bioflavonoid in green tea called quercetin also modulates hormones.

The American Journal of Clinical Nutrition states that green tea extract is one of the most effective naturally occurring botanical metabolism and thermogenic boosters. After a dose of green tea extract, metabolic rate increases by 4% over the next 24 hours. Recent studies point to polyphenols in green tea–specifically the catechins–that rev up the body’s metabolic engine. Past speculation that this was partly due to the caffeine content was debunked in a study at the University of Geneva: Researchers concluded that, “Green tea has thermogenic properties and promotes fat oxidation beyond that explained by its caffeine content.” In addition, they discovered that green tea extract directly influenced gastric and pancreatic lipases, to moderate fat absorption and enhance fatty fuel availability during exercise.1,2

For optimal athletic capacity, stable supplies of thyroid and adrenal hormones maintain stamina and muscle strength. Green tea extract acts as a botanical adaptogen that promotes hormone stability: An adaptogenic herb can enhance or subdue natural function, according to the body’s needs, to bring the body closer to an optimal balanced state. Current clinical observation indicates that green tea has a moderating effect on adrenal hormone levels, including cortisol and adrenaline. It can either boost these hormones if output is low, or help the body to reduce production or bind up excess if levels are too high.

In a study of swimming endurance, researchers discovered that green tea extract improved fat utilization during exercise. They tested the proportions of carbohydrates, lipids, and amino acids used as energy by skeletal muscles. The ratio in which they are used varies with the type and intensity of exercise and the level of fitness. Test subjects were given green tea extract according to body weight, or placebo. Researchers noted that a single high dose of green tea did not affect performance. However, long-term ingestion of green tea extract over 10 weeks improved endurance capacity up to 24%. This was accompanied by an increase in lipid catabolism–better fat breakdown and use–and by lower levels of lactate in the blood after exercise.3

Scientists at the University of Birmingham in the UK studied the effects of green tea with twelve healthy men who performed cycling exercise. Compared to a control group who took an inert placebo, these men showed a dramatic 17% increase of fat burning as a proportion of their total energy source. Green tea extract helps an athlete derive more energy from fat. Then fewer demands are placed on the premium energy supply for intense exercise–stored muscle carbohydrate. Sparing carbohydrate can prolong performance during endurance events.5

Research confirms the potent antioxidant actions of green tea. Antioxidant compounds help reduce the damage to cells at the molecular level, which unavoidably occurs as free radicals are generated during normal aerobic metabolism. For example, studies have shown that one or more cups of green tea per day can significantly increase the antioxidant capacity of tissues. This reduces damage to cell lipids and DNA, especially when they are under the stress of athletic training.6

In our clinic, we find that sufficiently high concentrations of green tea extract are necessary to reach therapeutic levels. Our athletic patients have excellent results with a formula providing the most potent of green tea’s medicinal compounds, epigallocatechin gallate or EGCG, present at an ideal 45% or 165mg per capsule. This is equivalent to three cups of green tea, but without the tea’s 120mg of caffeine. We like a formula that includes the benefits of theanine, lignans, and chlorophyll with whole green tea leaf. Such a blend brings excellent benefits for antioxidant protection and increased energy. Patients who exercise at high levels report having better long-term stamina as well as better immediate energy bursts and performance, and often an increased sense of wellbeing.