Athletic Performance is helped by Coenzyme Q10 with Lipase

For ATHLETIC PERFORMANCE, we recommend Coenzyme Q10 with Lipase to enhance energy and endurance, to speed muscle recovery, and to improve heart health and oxygenation. CoQ10 is a powerhouse antioxidant, essential for 95% of the body’s energy production at the cellular level. Its antioxidant actions protect connective tissues under the duress of vigorous exercise from free radical damage, and it helps muscle fiber strength. Since CoQ10 is part of the electron transfer chain in the mitochondria of every cell liberating energy from food, it is critical to gym performance and training. CoQ10 is so vital to health that Peter Mitchell received the Nobel Prize in Chemistry in 1978 for outlining its cellular activity. 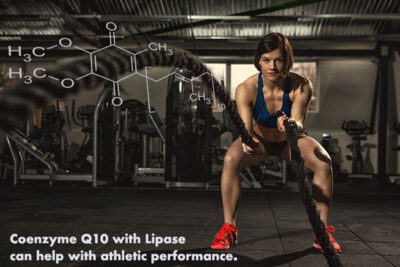 CoQ10, or ubiquinone, is a powerful fat-soluble antioxidant produced naturally in the human body and found in the mitochondria of every cell and tissue. The name ubiquinone stems from its ubiquity. It is a key part of the Krebs Cycle, which generates energy for all body processes from food breakdown.

Coenzymes of many kinds support enzymes in their various biochemical activities. CoQ10 is a crucial cofactor in the electron transfer chain of chemical reactions that release energy within every cell. It occurs in higher concentrations in the kidneys, liver, and heart, partly because they have higher energy requirements.

Within the mitochondria, which are organelles in every cell that generate energy, CoQ10 plays a key role in the Krebs cycle. During the final stages of food breakdown, energy is freed via the electron transfer chain from the chemical bonds of the food. This produces adenosine triphosphate (ATP), a molecule that cells use as their main energy source. As part of the last phase of liberating energy from food, CoQ10 enhances ATP production, boosting the amount of energy available. The musculoskeletal system is highly dependent on CoQ10, as its tissues and cells have high metabolic rates and require ample energy resources.

Coenzyme Q10 is a powerful antioxidant, shielding tissues from free radical injury. It is the only fat-soluble antioxidant present in all cell membranes, where it protects the fatty layers of membranes, and also DNA. CoQ10 is a powerful weapon preventing the generation of reactive oxygen species, which can cause tissue damage, reduced stamina, and chronic degenerative diseases.1

Various factors such as aging and stress can lower the body’s levels of CoQ10. Then the ability of cells to regenerate declines, a downward spiral. Declining CoQ10 levels are one of the most accurate biomarkers of the aging process. Although CoQ10 is found in meat, fish and whole grains, these foods do not contain enough to supply sufficient CoQ10 to meet the body’s needs.

For athletes, CoQ10 has a good number of benefits. It works in several ways to help recovery from exercise-induced muscle damage: It protects against muscle tissue trauma, and it cleans up the metabolic breakdown products that can follow minor injury. CoQ10 helps stabilize muscle membranes, making muscle fibers more resilient and less at risk of breaking.

Are you concerned about gaining more powerful bursts of movement such as in sprinting? A 2002 Australian clinical trial reported that after 4 weeks on CoQ10, the number of fast-twitch muscle fibers significantly increased in subjects, compared to those receiving a placebo. Fast-twitch fibers are the ones that grow the biggest, the strongest and the fastest. This data indicates that CoQ10 treatment influences muscle fiber composition toward a profile generally found in fit, athletically trained, younger individuals.1

CoQ10 helps to increase immediately-available energy, long-term stamina, and to speed recovery after exertion. For weightlifting activities, subjects taking CoQ10 were able to recover faster between bouts of exercise. They reduced their fatigue and improved their recovery between sets. In addition, coenzyme Q10 boosts gains in muscle strength and size. Several major studies confirm that CoQ10 supplementation enhances exercise energy, endurance, and performance. Research has been conducted most recently on elite athletes in several competitive sports including cross-country skiing, soccer, swimming; some also looked at sedentary men.

As early as 1997, Finnish scientists found that cross-country skiers taking supplemental CoQ10 significantly improved all the measured indexes of physical performance, including their maximal oxygen consumption, endurance, and their recovery between exercise bouts.2

A 2010 study of sixteen young swimmers found that physical performance significantly improved after taking CoQ10 for just 12 days. Running time until exhaustion, and short distance swim sprint time, were better. CoQ10 was evaluated for its effects on blood oxidative stress biomarkers, and found to reduce free radical compromise or injury to tissues.3

For biking, a 2008 study by Japanese scientists found that subjects supplementing with 300mg of CoQ10 per day for just eight days experienced less fatigue during exercise on a stationary bicycle. They recovered faster between bouts of exercise, compared to those taking either 100mg of CoQ10 or a placebo.4
Another randomized, double-blind, crossover study found that CoQ10 had performance-enhancing actions for both fit and sedentary men. During repeated bouts of high-intensity exercise, these men experienced increased energy and endurance that exceeded their usual aerobic capacity. CoQ10 was deemed to have significant benefits for enhancing athletic capacity.5

Lipase is an important type of fat-digesting type of enzyme that boosts the assimilation of CoQ10, bringing more of its many benefits for energy production, fat breakdown and increased performance. Naturally made by the pancreas, lipase is the main enzyme that breaks down the triglyceride fats found in our diets into monoglycerides and pairs of fatty acids. Lipase actually comprises a group of enzymes that are essential for digesting triglycerides, fats, and oils that we eat, and transporting them into the bloodstream, and then into tissues where the fats are needed. A spectrum of lipase enzymes in the human gut work in a range of pH environments from the saliva down to the small intestine. By facilitating a correct balance of fat absorption and use by cells, lipase is essential for strong cell membranes and a lively metabolism.

Because Coenzyme Q10 is highly soluble in fat, its absorption is greatly improved by lipase. CoQ10 tends to be poorly assimilated from the gut, because it is a large molecule that only disperses well in fat, but not in water. If CoQ10 is combined with lipase that is identical to the body’s own fat-digesting enzyme, then CoQ10 is carried more efficiently from the intestine into cells along with dietary fat, for maximum absorption.7

CoQ10 is best taken with meals that include fat or oil, as it is significantly better absorbed in the presence of fats. We look for a Coenzyme Q10 that is combined with lipase, which can give a 50% boost to the amount of CoQ10 that gets into the body. This means that a dose of 100mg CoQ10 can deliver the benefits of 150mg when partnered with lipase, so we prefer the two together.

Recommendation: A daily dose of Coenzyme Q10 (as ubiquinone) 100mg, with Lipase 300 FIP, and optional Vitamin E (in the d-alpha form) to maintain freshness 50 IU. Take once or twice daily, with any meal including fat or oil, or as directed by your healthcare provider.