Aging with Vitality is helped by Vitamin E family

For AGING WITH VITALITY the vitamin E family is a potent brain and nerve cell protector that reduces blood clot risk and protects the heart. It is a powerful antioxidant without which our tissues would be very vulnerable to free radical damage. This is particularly important in brain function and aging: The brain is especially vulnerable to free radical injury because of its high oxygen consumption rate, its abundance of lipid membranes that can too easily become oxidized, and its relative lack of its own innate antioxidants. 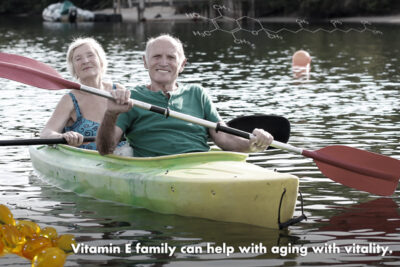 Experts consider vitamin E to be one of the most potent antioxidants protecting cell membranes and preventing damage to their enzymes and all other contents within. Without this antioxidant protection, our tissues would be very vulnerable to the harmful effects of free radical damage. Free radicals are rogue molecules with an unpaired electron that seek out electrons from bodily tissues and cells. In the oxidizing process, tissues are damaged by disruption of their normal structure.

The vitamin E family is made up of a group of eight constituents: every one of them has specific and important actions, and they work together in nature to enhance each other’s benefits. There are two chemically related categories known as tocopherols and tocotrienols, each of which has important cardiovascular, hormone, immune and antioxidant activity in the body. The vitamin E family members include d-alpha, d-beta, d-gamma and d-delta tocopherols, and alpha, beta, gamma and delta tocotrienols. These eight forms of vitamin E need each other to work effectively, and their bioavailability to the body is greater than if only simple d-alpha vitamin E is used.

D-alpha tocopherol is one of the more active members of the vitamin E family. While the natural tocopherols have documented health benefits as hormone modulators, antioxidants, and immune supporters, the alpha, beta, gamma and delta tocotrienols bring additional heart and circulation, and blood sugar benefits that tocopherols lack. Studies that showed little effect from vitamin E supplementation too often used only alpha-tocopherol, rather than also including the other important tocopherols and tocotrienols. The synthetic dl-type of tocopherols have no health benefits, may not even be safe, and resulted in even more ineffective studies. We caution patients to avoid dl-vitamin E.

For aging with vitality, and protecting essential organs, the vitamin E family of mixed natural tocopherols and tocotrienols has several mechanisms of action:

The cardiovascular system benefits greatly from the vitamin E family. If a clot does block a blood vessel, then alpha- and gamma-tocotrienols particularly can protect the heart and any tissues that lose blood flow and are at risk of injury and cell death from oxygen lack. Tissues that are deprived of blood flow, known as ischemia, suffer less tissue injury and death in the presence of tocopherols.

The vitamin E family has major benefits for coronary artery disease. In the double-blind Cambridge Heart Antioxidant Study, over 2,000 patients with coronary artery disease received a placebo pill or 400 IU or 800 IU of vitamin E daily. The truly remarkable results showed those who took either dose of the vitamin E reduced their risk of nonfatal heart attack by 77% over one year compared to the placebo group.1  This means that out of every 100 people who might have suffered a heart attack, 77 stayed well while taking vitamin E.

In addition, the vitamin E family can improve blood chemistry and heart risk markers. It can boost the ‘good’ HDL cholesterol, leading to lower cholesterol risk ratios. Human research shows that tocotrienol supplementation can lower total serum lipids by up to 23%, and also can reduce dangerous forms of apo-lipoproteins, lipid-carrying proteins that increase cardiovascular risk. By contrast, alpha tocopherol alone has no effect on serum lipids. Tocotrienols may be more potent for reducing levels of homocysteine than folic acid. Homocysteine is a waste molecule that the body naturally makes, but which increases cardiovascular disease risk if it becomes too high.

Vitamin E’s tocopherols and tocotrienols are also antioxidant for the cholesterol molecule, protecting it against becoming damaged and sticky. If it is less likely to adhere to artery walls, then even higher total cholesterol is less risky for triggering blocked arteries.

For the nervous system, cumulative free-radical damage to neurons over time contributes to cognitive decline and neurodegenerative diseases, such as Alzheimer’s disease. Researchers hypothesize that ingestion of vitamin E antioxidants can provide protection. The results of a clinical trial in patients with Alzheimer’s disease of moderate severity supports this hypothesis: 341 patients were randomly assigned to receive a placebo, vitamin E 2,000 IU/day, a monoamine oxidase inhibitor (selegiline), or vitamin E and selegiline. In this trial, vitamin E supplementation delayed progression to institutionalization.3 To assess whether antioxidants can prevent cognitive decline earlier in the disease process, a seven-year study of 2,889 patients in Chicago was undertaken to examine cognitive function in a large biracial population. The results confirmed that those who had high vitamin E intakes from diet or supplementation had a 36% reduction of decline in cognitive function compared to those whose vitamin E intake was low.2

The vitamin E family at higher doses can help to prevent Alzheimer’s disease. A four-year Boston research survey of 633 seniors with Alzheimer’s showed a significant response with vitamins C and E. Twenty-three of the group took vitamin C supplements at 500 mg/day, 27 took vitamin E 400 IU/day, and 68 took a multi-vitamin containing only 60 mg vitamin C and 30 IU vitamin E. Those who took higher clinically relevant amounts of vitamin E or C did not develop the disease, but 11 of the 68 who took the lower doses in a multi-vitamin developed Alzheimer’s. Eighty patients developed Alzheimer’s among those who did not take any vitamins. Other researchers report that for advanced Alzheimer’s even higher doses of vitamin E of 2,000 IU/day are needed to reduce disease progression.4

Immune function is enhanced by the vitamin E family. Eighty-eight healthy people aged 65 or older were studied for their immune response after supplementation with vitamin E. Researchers from the USDA Human Nutrition Research Center at Tufts University in Boston assigned the group to take vitamin E at 90 IU, 300 IU, 1,200 IU per day, or a placebo. Successful immune response to infection was highest for all the vitamin E groups versus placebo, with those taking 300 IU showing the greatest response.5 This study agrees with another at Johns Hopkins University that found healthy adults over 65 need only standard doses of vitamin E to improve several measures of immune function.6

In our clinic, to support our patients seeking vitality as they age, we see the best results with the mixed natural vitamin E family, including all the tocopherols and tocotrienols that work synergistically together, as they occur in nature. This blend offers the best cardiovascular, nervous system, and immune protection, and potential help for erectile dysfunction. Regarding occasional media reports about safety concerns for ‘vitamin E,’ our view is that these concerns apply solely to the synthetic dl-form, a mirror image of naturally occurring vitamin E, which does not exist in nature, e.g. dl-alpha tocopherol. This unnatural isomer may actually be detrimental if it blocks the beneficial d-form from entering cells. We recommend only the eight-constituent mixed natural form, preferably with generous amounts of the tocotrienols. We look for a guaranteed non-GMO formula in an absorbable and gentle natural base such as sunflower oil.