Aging with vitality is helped by R-Lipoic Acid

For AGING WITH VITALITY, R-Lipoic acid is a vital nutrient for energy, and a nerve and retina protector, while helping to keep skin youthful and supple. It is sometimes called nature’s perfect antioxidant, as it is an antioxidant naturally made by every cell in the body. It also functions as a cofactor for cellular energy production from ATP in the mitochondria of all tissues. However, since cells make less R-Lipoic acid with age, there may not be sufficient R-Lipoic acid for energy generation, tissue protection, or free radical quenching, for which there is greater need as the body ages. 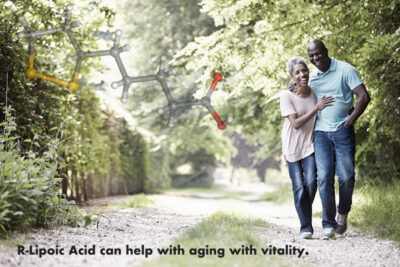 R-Lipoic acid is a compact, sulfur-rich, molecule that easily crosses cell membranes. It has unusually broad-ranging actions against both water-soluble and fat-soluble free radicals, both inside cells and in the supportive tissues outside. R-Lipoic acid, known as or RLA, binds up free radicals in fatty or protein-rich tissues. Navigating cellular membranes throughout the body also means that lipoic acid can cross the blood-brain barrier. Myelin, the protective sheath around nerves, is fatty, and RLA can exert its protective effects against neurological and cognitive diseases, such as Alzheimer’s disease and dementia.

This potent anti-aging nutrient is important because it helps regenerate glutathione, the body’s most powerful “master” antioxidant that keeps all other antioxidants performing at peak levels. Glutathione is essential for healthy eyes, skin, kidneys, liver and more. With age, the body’s levels of glutathione sharply decline and cannot be replenished with a supplement, since ingested glutathione breaks down in the digestive tract before it can reach cells. R-Lipoic acid restores glutathione, as well as vitamins C and E, and CoQ10, reducing vulnerability to chronic degenerative disease, and making it one of the most powerful defensive antioxidants against aging.

R-Lipoic acid is a key nutrient for safeguarding mitochondria from damage. As they generate energy, mitochondria naturally produce oxidative by-products. Without adequate antioxidants to clear these, mitochondria lack protection and decay faster with age, leading to more rapid cellular decline. In addition, RLA is a specific protector for nerves and nerve-related tissues, helping reduce diabetic nerve damage, protecting the brain, retina, and offering anti-aging benefits. It is used in Europe for glucose regulation, nerve conditions, liver protection, and insulin resistance.

Although lipoic acid is available through the diet in red and organ meats, and vegetables like spinach, broccoli, potatoes, tomatoes, carrots, and beets, in food it is bound to the amino acid lysine, and digestive enzymes cannot break the lysine bond. So it is not very bioavailable, meaning it cannot circulate freely and do its job.

The R-Lipoic acid variant (RLA) is the natural, bio-identical form and the only type of lipoic acid that exists in nature. Because of the difficulty and high cost of isolating natural R-Lipoic acid, many common formulas labelled ‘alpha-lipoic acid’ contain a synthetic fifty-fifty mixture of R-Lipoic acid and (trans) S-Lipoic acid. These R- and S-isomers are mirror images of each other, but only the R-form brings true medicinal benefits. RLA is up to ten times more potent at a cellular level than the S-variant. R-Lipoic acid is present in only tiny amounts in, and tightly bound to, mitochondria in animal and plant tissues.

Age-related diseases result from oxidative stress, inflammation, mitochondrial dysfunction, or DNA damage. These disorders also follow dysfunction and shortening of telomeres, the protective caps at the end of chromosomes. Exciting research in 2015 indicated that R-Lipoic acid not only eliminates free radicals, it can actually lengthen telomeres. Understanding that, researchers in this study at Emory University School of Medicine sought to determine the specific mechanism of action of lipoic acid on telomeres. These scientists found that lipoic acid stimulated telomerase, an enzyme that lengthens the chromosome’s telomeres. Longer telomeres mean cells are healthier and function “younger,” keeping their metabolic processes lively and sprightly as they age, reducing the incidence of pain or disease.1

The major importance of R-Lipoic acid in regeneration of glutathione and youthfulness was highlighted in a Danish study comparing antioxidant activity between forty-one centenarians and a younger group of elderly subjects with an age range of 60 to 105. Those with higher levels of glutathione were the most active regardless of their age.2

Clinically, our more mature patients have seen good results over time using a high potency of R-Lipoic acid, in the range of 400 to 800 mg daily. They experience relief from neuropathy, tinnitus, and other nerve conditions, and also include RLA as a valuable support for retina protection, blood sugar balance, and for maintaining youthful, well-toned skin.

Recommendation: R-Lipoic Acid (as Sodium R-Lipoic Acid) 400mg once or twice daily, or as directed by your healthcare provider.