Aging with Vitality is helped by Ginkgo Extract with whole leaf

For AGING WITH VITALITY, gingko extract with whole leaf enhances healthy blood flow to the brain, nerves, and limbs; and it is also a nerve protector and potent antioxidant for the brain. It stimulates circulation and oxygen flow to the brain, improving alertness, preventing cognitive decline, and enhancing memory. Consistent use of ginkgo extract has also been shown to improve communication, orientation, and mobility. The advancing age of the population worldwide has stimulated more attention and research into the concept of “successful aging” and maintaining cognition so that senior populations can remain actively involved in society. Ginkgo is a powerful tool that empowers older adults to enhance their own health, as they also work with nutrition, lifestyle, and exercise for healthy aging. 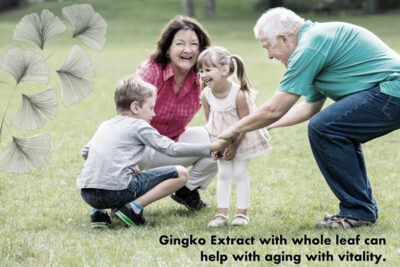 Ginkgo works in several ways for older people to improve brain and nerve health and longevity:

Ginkgo biloba, or maidenhair, one of the oldest living tree species on Earth, is a beautiful tree with fan-shaped green leaves. It was first used medicinally in China around 2,800 B.C. as a brain tonic. As the only surviving member of an ancient order of plants, ginkgo is often referred to as a living fossil. In traditional Chinese medicine, ginkgo seeds were classically used to open ‘channels’ of energy to different organ systems: This ability to increase blood flow to various parts of the body may be the origin of many of gingko’s benefits.

While its leaves and seeds are an integral part of the Asian culture and traditional medicine, modern research primarily focuses on the active components of ginkgo leaf extract. Scientists have found more than 40 components in ginkgo, and its plant-based antioxidants (or flavonoids) and terpenoids are particularly believed to have a medicinal effect. Laboratory and clinical studies show that flavonoids protect the nerves, heart muscle, blood vessels, and retina from oxidative damage. Terpenoids, such as ginkgolides, improve blood flow by dilating blood vessels and by reducing the stickiness of platelets, which cuts the risk of tiny clots that can, even on a microscopic level, impede brain circulation.

The human body is dependent upon oxygen for survival; yet, aging, stress, or a sedentary lifestyle can all lead to a hypoxic or low-oxygen state. Gingko extract increases blood flow and therefore oxygen delivery to the brain, muscles, and nerves. It boosts the effects of nitric oxide, a communication molecule which opens blood vessels, leading to better blood flow to organs. Nitric oxide acts as a signal for blood vessels and their tiny muscles, and lasts for only a few seconds before being degraded. The endothelial tissue that lines blood vessels sends nitric oxide as a signaling compound to the surrounding smooth muscle of the vessels. This causes these smooth muscles to relax, then blood vessels to dilate, increasing blood supply to the surrounding tissues. Nitric oxide also helps improve the health of blood vessels by inhibiting the over-development of vascular smooth muscle, so vessels do not become bulky or tight. In addition, nitric oxide limits platelet aggregation which reduces the risk of blood clots. In these ways, nitric oxide is vital to maintaining healthy blood flow throughout the body.

Aging can bring a lack of energy and poor circulation. In addition, a busy, stressful lifestyle takes an extra toll on vitality. Researchers in Germany set out to study the effects of ginkgo on mental acuity and mood in healthy adults. This randomized, double-blind trial worked with 66 volunteers for four weeks. One group was given a placebo, and the other group took 240mg of ginkgo biloba extract daily. Those taking ginkgo saw significant improvements in their ‘self-perceived’ mental health, sharpness and memory, and quality of life, and reported a significant improvement in mood compared to those in the placebo group.1

Another 2014 German study collected self-reported data from 1,672 subjects over the age of 60 and asked questions pertaining to knowledge about and prevalence of gingko use. Results pointed to the awareness and concern educated people have about successful aging, and the importance of well-designed, long-term studies exploring herbal “lifestyle” treatments to avoid cognitive decline.2 Many older people showed interest in, or took, ginkgo for memory or brain blood flow health and nervous system protection.

Ginkgo is a potent antioxidant: A classic 1998 study investigated the effect of protective effect of gingko extract on aging by measuring oxidative damage in mitochondria. Mitochondrial DNA and glutathione in the brain and liver of older individuals suffer significantly greater oxidative damage than in younger subjects. Treatment with gingko extract over time partially prevented these degenerative changes and improved measures of oxidative injury observed in the mitochondria of older brains and livers.3

Another French biological trial examined gingko extract in light of the free radical theory of aging. This theory posits that oxygen-derived free radicals cause age-associated impairment by attacking mitochondrial DNA at the cellular and tissue levels. Oxidative damage to mitochondrial DNA accumulates with age in human and mammal tissues, and lifespan shortens as mitochondrial DNA damage accumulates. Researchers in this study showed that certain antioxidants, such as gingko extract prevent age-related mitochondrial oxidative stress, even if administered later in life. Ginkgo and botanical antioxidants also protect the brain, nervous system, and liver.4

More recent studies since 2010 have aimed to confirm the biochemical mechanism of how ginkgo biloba extract works on the brain. Researchers noted ‘a significant relationship between aging and apoptosis in the cochlea’, meaning premature cell death in the inner ear as well as the eye and brain. In conclusion, the study stated ‘ginkgo biloba extract has a significant benefit with an early and preventive effect, reversing the deleterious effect of aging in the integrity of the cochlea, even in the late stage of the lifespan.’ 5 Ginkgo extract protects cells against early decline and death, boosting the longevity of healthy cells, and extending the healthy lifespan of nervous tissues including the inner ear, retina, and brain.

In our clinic, we find that gingko should be taken for at least 4 to 6 weeks to build up to its full benefit, which is supported by studies. We regularly recommend ginkgo, standardized to include the active constituents at 24% that also includes whole ginkgo leaf for its trace minerals and botanical nutrients, to patients for brain health, memory, circulation and also for Raynaud’s disorder.

Recommendation: Ginkgo biloba 80mg, ideally with 24% flavone glycosides, 6% terpene lactones, and including some ginkgo whole leaf for trace nutrients, 2 to 3 doses daily, best taken between meals; or as directed by your healthcare provider.