Aging with Vitality is helped by Acetyl-L-Carnitine

For AGING WITH VITALITY, the amino acid acetyl-L-carnitine protects the brain, heart, liver, peripheral nerves, muscles, and immune system against age-related degeneration. Acetyl-L-carnitine, or ALC, works with coenzyme Q10 and lipoic acid to maintain the function of mitochondria. Published research shows that acetyl-L-carnitine is critical to youthful cellular function in all tissues throughout the body. 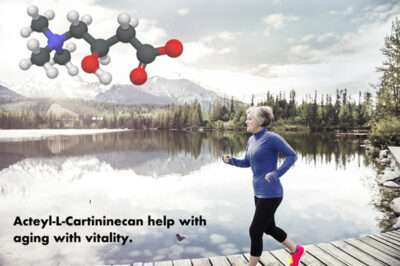 Acetyl-L-carnitine is a biologically active form of the amino acid L-carnitine and has been shown to protect cells throughout the body against age-related degeneration. Amino acids are the building blocks of proteins; and L-carnitine is naturally produced in the body. Carnitine in particular, is a vital transporter molecule critical to providing fatty acids to the mitochondria of each cell, the fuel to produce energy. Mitochondria are the cell’s powerhouse, acting like a digestive system which takes in nutrients, breaks them down, and releases energy-rich molecules. If mitochondrial function is reduced with age, then tissue decline and susceptibility to degenerative disease become inevitable.

In the early 1980s, acetyl-L-carnitine was approved as a “drug” in Europe to treat heart and neurological disease. In the United States, carnitine is approved as a treatment to protect against muscle wasting diseases, including heart muscle weakness and low energy. In addition to its FDA-approved indications, acetyl-L-carnitine has been shown to maintain immune competence. It also helps cellular rejuvenation, reducing the formation of a cell-clogging pigment called lipofuscin that accumulates in the cytoplasm of cells with aging.

Cutting-edge research has given a clearer look at the age-old mystery of aging by examining mitochondria, those ancient powerhouses contained within all cells. When mitochondrial DNA suffers damage, the symptoms of aging worsen. This can be preventable to some degree with acetyl-L-carnitine. Groundbreaking Swedish research supported the mitochondrial theory of aging by breeding mice who were susceptible to accelerated mitochondrial damage and who then experienced premature aging.1

The capacity of acetyl-L-carnitine to reverse heart aging in research studies is of special interest for aging with vitality. Scientists measured cell energy activity and respiration rates in the heart mitochondria. They noted that cellular activity, energy and respiration were depressed by approximately 40% in older individuals. When acetyl-L-carnitine was administered, their heart function was almost completely restored to the metabolic level of young controls. The researchers attribute this striking reversal to cardiolipin, a key agent necessary for substrate transport, in the heart mitochondria. Aged individuals start out with lower cardiolipin; treatment with acetyl-L-carnitine markedly reversed the age-associated decline in cardiolipin content. This newly identified mechanism explains why acetyl-L-carnitine is so beneficial for helping to reverse congestive heart failure in humans.2

The aging heart displays a lower fatty acid utilization, a reduced ability to use needed fatty acids for heart nourishment and function, and a resulting loss of bioenergetic reserve capacity. A 2012 study investigated whether diminished levels of carnitine cause age-related impairment of cardiac fatty acid use. Their results clearly indicate that supplementing with ALC preserves fatty acid-supported mitochondrial bioenergetics by restoring the age-related decline of enzyme activity in heart tissue.3 Multiple lines of evidence indicate that mitochondrial decay is a key factor that leads to alterations in energy metabolism in the aged heart, but the exact biochemical events are not completely understood. These results provide a new perspective on the decline in fatty acid use by the heart that occurs with aging. ALC is a promising solution for supporting healthy fatty acid use and protecting the cardiac tissue from age-related impairment.

Carnitine also has a significant effect on preserving skeletal muscle mass and physical strength, and reducing fatigue and frailty for older people. Carnitine possesses anti-inflammatory properties, it increases plasma insulin-like growth factor 1 (IGF-1) that calms inflammatory cytokines which can worsen muscle wasting in aging. A double-blind pilot study of 28 older women who received carnitine or placebo over 24 weeks was recently undertaken. A marked increase in free plasma carnitine concentration was observed in the carnitine supplemented group. Even with the short duration of this study, the placebo group showed a decline in skeletal muscle mass, while the women taking carnitine stayed stable or even improved.4

The brain also benefits from acetyl-L-carnitine. Aging causes alterations in brain cell metabolism as circulation to the brain diminishes. Then a cascade of pathological events results in neurological impairment. Acetyl-L-carnitine has been shown to counteract several mechanisms of brain cell damage. A 1999 study shows that acetyl-L-carnitine protects against temporary cerebral ischemia, tissue damage from lack of blood flow, by maintaining a steady energy cycle within brain cells. Researchers believe the transfer of the acetyl group to from ALC to coenzyme A (CoA) is a plausible mechanism of action for ALC’s ability to protect brain neuron energy production, even if the blood flow is impaired.5

We can get small amounts of acetyl-L-carnitine from our diets by eating meat and fish, but not enough for a therapeutic effect on muscle strength, heart, and brain health. Vegetarians and vegans can especially benefit from acetyl-L-carnitine supplements, as can older adults, as carnitine levels in the body decline as people age.

In our clinic, a substantial number of our older patients include acetyl-L-carnitine for maintaining vitality, and for brain and heart health. These patients also notice that ALC can help with mood, improving depression, and enhancing libido for men.

Recommendation: Acetyl-L-carnitine 500mg daily total, fine to take with any meal, or as directed by your healthcare provider.