For Menopause, red clover provides up to 75% reduction in hot flashes and night sweats, especially when used early in the menopause process. Its isoflavones, including diadzein and genistein, bind to estrogen receptors to stabilize the body’s own hormone output or to send a message to the receptors that more estrogen is present than there actually is. Vasomotor symptoms including hot flashes and night sweats decline, sleep can improve, and vaginal dryness can subside.

In 2002, results from the Women’s Health Initiative (WHI) regarding the use of menopausal treatments were published. Researchers realized that Provera, a conventional chemical drug used with estrogen replacement, came with serious long term complications. This spurred interest in safe alternative, natural options for providing menopause relief. Red clover flower tops have a long tradition of use in botanical medicine as a gynecological herbal remedy and as an alterative, a traditional herbal medicine term. Alteratives are classically considered to be ‘blood cleansers and purifiers’ that support efficient elimination of waste by promoting lymphatic flow and the liver’s detoxifying functions, as well as assimilation and utilization of nutrients. Red clover, a legume in the pea family, was listed in 1898 in King’s American Dispensatory, a historical bible of early eclectic physicians. 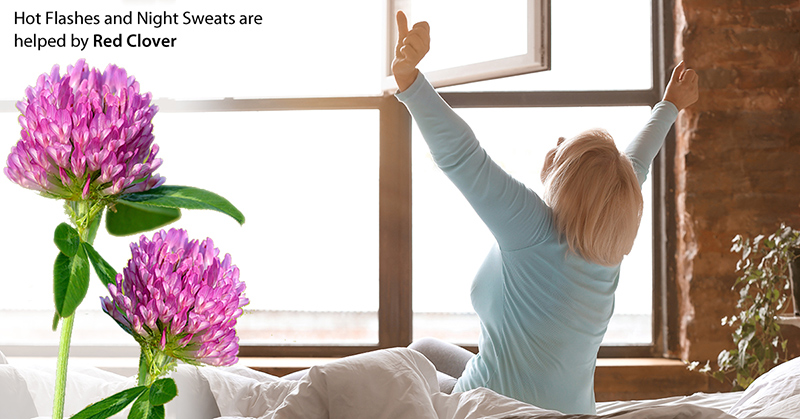 Since the 1990s, clinical trials with red clover have shown up to 75% reduction in hot flashes over four months, versus a 30% drop for the placebo group. The efficacy partially depends upon the participants’ stage of menopause: Because botanicals work to support the body’s natural estrogen levels, they can best do so while there are estrogen reserves to encourage. For women who are many years beyond having periods, botanicals may act more gently or gradually.

A 2006 review of studies looked at evidence of red clover’s isoflavones for the treatment or prevention of the signs and symptoms of aging that increase after menopause: increases in blood pressure, changes in lipid profiles, loss of bone mass density, and diminished memory and cognition. The review concluded that red clover appears to have a gentle but clearly positive health effect on plasma lipid concentrations, bone mass density, and cognitive abilities.2

A separate random, double-blind study evaluated the effects of red clover extract on menopausal symptoms in 53 women over the age of forty compared to a placebo. The results showed that red clover isoflavone supplementation significantly decreased the rate of many menopausal symptoms including a positive effect on vaginal health and cytology and on triglyceride levels, with symptoms lowered enough to positively impact the women’s quality of life even though women’s body weights did not change much.3

Recent studies of red clover have documented 58 to 70% reduction in the number of hot flashes, and also a 47% average decrease in their severity. This means fewer hot episodes that were less intense or shorter. And it is very good news that red clover did not have an estrogenic effect on the lining of the uterus, which did not become thicker than controls. Isoflavones have a greater affinity for beta-estrogen receptors in the vasculature, brain, bones and heart, bringing benefits for vasomotor hot flushes, mental acuity, bone density, and cardiovascular health, without effects on alpha receptors in the uterus, breasts and ovaries.4 Red clover is a recognized remedy for helping with bone density loss at menopause, and has a gentle effect in encouraging new bone formation.

Recommendations:
Red Clover extract (8% isoflavones) 500-1,000mg in blend with Red Clover tops 175-350mg, once to twice daily, between meals; or as directed by your healthcare provider.