For PROSTATE ENLARGEMENT, stinging nettle root improves urine flow, helps the bladder to empty, and eases most of the common prostate symptoms including urgency. It is a cardinal remedy for benign prostatic hyperplasia, also known as BPH. Stinging nettle root (Urtica diocia) works by reducing the sensitivity of androgen receptors and inhibiting enzymes, resulting in lower testosterone and less of the symptoms caused by its excess. Stinging nettle also binds to and increases sex hormone-binding globulin (SHBG) which then lowers free testosterone. In sufficient doses of at least 200mg and standardized for over 15% total sterols, nettle root was found to ease most of the symptoms of benign prostatic hypertrophy, and also to improve measurable urine outflow compared to placebo, after six to twenty-four months of use. 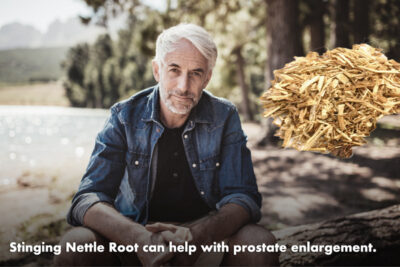 Stinging nettle is an adaptogenic herb, so called because of its unique ability to “adapt” its function according to the body’s specific needs. Stinging nettle root works to optimize and stabilize the endocrine system, binding to excess testosterone and other androgens and to estrogen hormones in the body, and removing or distributing them when and where they are needed. Nettle roots contain sitosterol, sitosterol-beta-D-glucoside, other sterol derivatives, tannins, phenolics, ligands including isolaric, iresinol and neoolivil, and other compounds. These all markedly inhibit the enzyme 5-alpha reductase. Impeding this enzyme means there is less creation of DHT, a strong testosterone breakdown product that can over-stimulate prostate cells and contribute to benign prostate enlargement.

For BPH, stinging nettle root can also render androgen receptors and prostate steroid receptors less sensitive, so that prostate cells are not over-activated by male sex hormone stimulation. Also nettle root may help protect prostate cells by preventing sex hormone-binding globulin (SHBG) from attaching to them, and by blocking dihydrotestosterone (DHT) from binding to SHBG. In addition, nettle root contains polysaccharides which have a good anti-inflammatory effect: They stimulate helpful T-lymphocytes, and impede white blood cell HLE (human leukocyte elastase), one of the most destructive enzymes that enters tissues to trigger the inflammatory process.

Phytotherapeutic agents, or plant therapies, such as nettle root have long enjoyed traditional popularity in many European countries for treating BPH, and their use in the U.S. is increasing. As their uses are researched, discussion about the best formulations continues. One randomized, multicenter double-blind study confirmed that nettle root taken along with saw palmetto decreased symptoms as effectively as the drug finasteride. Other research showed that standardized nettle root used with pygeum for six months significantly reduced night-time urination and improved flow.

One study tested a stinging nettle root combination against finasteride, and found a helpful outcome for bladder emptying and urine flow. In more than 20 papers, clinical studies with different stinging nettle root extracts were reported. Almost all studies described improvements of clinical symptoms, although some trials were of short duration and uncontrolled.

There have been three significant double-blind, placebo-controlled studies performed with stinging nettle root. In one clinical trial 25 patients w

ith BPH were treated twice daily with 300mg of nettle root, while 25 other patients received placebo for nine weeks. There was improvement of lower urinary tract symptoms in the group treated with nettle, with a significant increase of urinary flow rate, and a 44% improvement in micturition volume. Also, a marked decrease of SHBG serum levels were observed.

A second study reported a 14% improvement in urinary flow and an impressive 53% decrease of residual urine in 32 BPH patients: each of these men received 600mg of stinging nettle per day for 6 weeks. In a more recent study, 41 patients were randomized to receive either nettle root or placebo for three months. Compared with placebo recipients, treated patients enjoyed a statistically significant improvement of the IPSS, and a drop of residual urine volume.

In our clinic, we look for a potent dose of 200-250mg of nettles root that is standardized for a sterol content of at least 15%, the required high amount used in successful clinical studies to reduce total and free testosterone levels. Stinging nettle root’s benefits for BPH are enhanced by other botanical remedies: Saw Palmetto Berry Extract (Prunus africana) helps to decrease symptoms of elevated testosterone levels by inhibiting the enzyme 5-alpha-reductase. Pygeum Bark Extract has hormone-balancing effects and also inhibits 5-alpha reductase so that less DHT is made in prostate cells. Pollen concentrate has powerful anti-inflammatory benefits, and it encourages the bladder muscles to contract efficiently while relaxing the urethra.

Recommendation: Stinging Nettle root, 200-250mg standardized for a minimum of 15% total sterols, once or twice daily, best between meals, or as directed by your physician.