For PROSTATE ENLARGEMENT, a high dose of the very safe and effective herb pygeum notably lessens the frequency of nighttime bathroom visits, improves urination stream and bladder emptying, and reduces urgency. It is a key remedy for benign prostatic hyperplasia, also known as BPH. 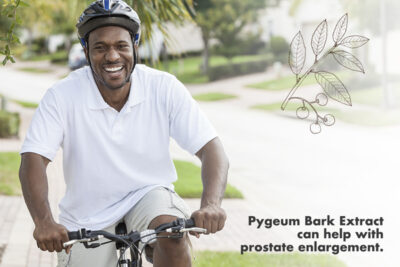 Pygeum is a large evergreen known as the African cherry tree, native to central and southern Africa, which grows to up to 150 feet. For thousands of years traditional African healers have used the bark to treat bladder disorders, urine flow, and benign prostate hypertrophy symptoms. Historically, the powdered bark was made into a tea. In the 1960s, Europeans began using pygeum bark extract to treat mild to moderate prostate enlargement. This ancient supplement then caught the attention of healthcare professionals and healers in many countries worldwide.

Pygeum is known to work in several ways for BPH:

Clinical studies to assess the efficacy of pygeum for BPH generally use standardized extracts with at least 14% triterpenes including beta-sitosterol and 0.5% n-docosanol. Numerous double-blind clinical trials have found that an effective dose is at least 100-200mg and ideally up to 600mg daily total. After three to six months patients commonly show major improvements in urine flow rate, rising to 8.2ml per second versus 5.4 before pygeum. Bladder emptying also improved very much: the amount of residual urine left behind in the bladder after urination dropped to 33ml on average, compared to 76ml without pygeum, which is less than half. Nocturnal urination trips decreased by at least 19%. Pygeum extract also enhances healthy secretions from the seminal vesicles and prostate.

In the Czech and Slovak Republics, researchers explored the efficacy and safety of Pygeum africanum extract in eighty-five men ages 50 to 75 years old with mild to moderate BPH. During the two-month study, the men were given 50mg of pygeum extract twice a day. This study used the International Prostate Symptom Score (IPSS), an eight-question, self-administered screening tool used by patients to track their symptoms including: feeling of incomplete bladder emptying, frequency of urination, intermittency of urine stream, urgency of urination, weak stream, straining, and waking at night to urinate. In this study, IPSS scores improved 40%, with an overall 31% improvement in quality of life. Nighttime urination frequency was reduced by 32% for men taking pygeum, as their prostates shrank and their bladders emptied more completely. These improvements persisted for one month even after stopping pygeum.1

Another two-month randomized, double-blind, comparative phase study experimented with dosage, dividing 209 men with symptomatic BPH into two groups. One group received 50mg of pygeum daily; the other 100mg once daily. Both groups had similar improvements in the IPSS averaging 38%, better quality of life (28% in both), and a significant improvement of maximum urinary flow rate, improved 19% in the 100mg group and 16% for the men receiving the lower dose.2

In a larger placebo-controlled, double-blind study, 263 men received either 100mg of pygeum or placebo daily for 60 days. The pygeum group demonstrated a 17.2% improvement in urinary flow, a 24.5% decrease in residual bladder volume (urine left in the bladder because of incomplete emptying), a 31% decrease in nocturia or nocturnal urination, and a 19.4% drop in daytime urinary frequency. Overall, 66% of the pygeum group reported improvement, compared to only 31% of the placebo group.

We find in our clinic that using a blend of complementary herbs magnifies the actions of pygeum. In addition to a high-dose of pygeum at in the range of 500 to 650mg, we observe with patients that stinging nettle root eases symptoms of benign prostatic hypertrophy, and also improves measurable urine outflow. In Germany, Austria, and Italy, saw palmetto is used, along with pygeum and nettle root, as a first-line treatment for prostate gland enlargement. Pollen concentrate encourages the bladder muscles to contract efficiently while relaxing the urethra.

Recommendation: Pygeum Bark Extract 500 to 650mg daily total, standardized to at least 45% total sterols, best absorbed between meals, any time of day, or as directed by your healthcare provider.