Low Testosterone is helped by Vitamin D3, in natural oil base 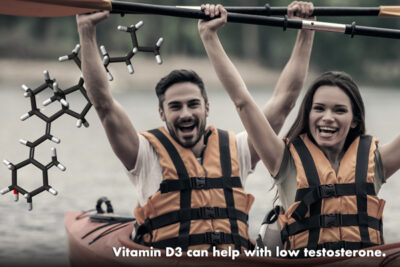 In adult males, 95% of the hormone testosterone is made by the testicles – between 3 to 10mg each day – with the remaining amount produced by the adrenal glands. In men’s blood, most testosterone is bound to two proteins: sex hormone-binding globulin (SHBG) and albumin. These proteins store and transport testosterone throughout the body. Only a very small amount of testosterone, 2 to 3%, which has broken loose from those proteins, is available to exert its biological effects. This is called free testosterone (FT) in laboratory tests. While its amount is relatively small in proportion, FT is the active form, and is key to maintaining optimal male performance and health.

Testosterone is the main sex hormone in men and plays a critical role in libido, erectile function, sperm production, mood, brain function, muscle mass, bone health, energy, and even sleep. Concerns surrounding prescription testosterone therapy include the drastic swings in blood levels after injections, and possible unwanted side effects like hair loss, a significant elevation of cholesterol from high testosterone doses, and rarely, an increase in cardiovascular risks for certain men. Men who have heart trouble, are overweight, or have sleep apnea may not be eligible for testosterone therapy. These men can benefit significantly from safe, effective natural treatments including vitamin D3 for increasing testosterone and supporting balanced male hormones.

Vitamin D3 is an important fat-soluble nutrient. Only minimal amounts are naturally found in very few foods, such as mushrooms and fatty fish. In sunny climates such as southern California, Hawaii or Mexico, the body’s skin can make high amounts of vitamin D3 from a cholesterol derivative when skin is directly exposed to ultraviolet light. Hence vitamin D is sometimes referred to as the “sunshine vitamin.” However, vitamin D is scarce in foods and prolonged sun exposure carries health risks. In northerly American states and Canada, including regions such as Washington, British Columbia, New England, and northern Europe and Scandinavia, the sun is weak and people make no vitamin D3 through their skin during the fall, winter and spring, and barely any even in mid-summer. Hence, vitamin D deficiency is very prevalent. In a 2011 estimate by the Centers for Disease Control, at least 25% of Americans were at risk for vitamin D inadequacy and 8% were at risk for vitamin D deficiency. Increasingly people are seeking supplements: the dose required is the daily amount needed to reach a target blood level of 60-100 ng/mL after 4 to 6 weeks.

Interesting research was conducted also in 2015, revealing that highly active men such as athletes or military personnel corrected for low testosterone by optimizing their vitamin D3 levels. Researchers analyzed 312 military servicemen and noted that “serum vitamin D concentrations were a significant, positive predictor of total testosterone when controlling for age and body mass index.” 4 This means that men with higher amounts of vitamin D3 in their bodies had better testosterone levels.

As a fat-soluble nutrient, the absorption of vitamin D is greatly enhanced in the presence of an oil base or fatty carrier. In our clinic, we see consistently excellent results for vitamin D3 uptake if it is in a formula incorporating either vegan medium chain triglycerides, or fish oil with omega-3 fatty acids including DHA docosahexaenoic acid and EPA eicosapentanoic acid. For maximum stability, we also prefer that vitamin E as natural d-alpha tocopherol or as mixed tocopherols is present as an antioxidant to keep the vitamin D3 fresh.

Recommendation: Vitamin D3 as cholecalciferol, in an oily or fatty base with either vegan medium chain triglycerides, or fish oil omega-3 fatty acids including DHA and EPA, also including vitamin E as d-alpha or mixed natural tocopherols to preserve freshness. Vitamin D3 should be taken with any meal including fat or oil, for peak absorption. The dose required is that which is needed to attain a blood level of 60-100 ng/mL after 4 to 6 weeks of taking it daily. For most people that daily dose may be in the 4,000 to 8,000 IU range, but checking your blood level is essential to know for sure, or follow the directions of your healthcare provider.