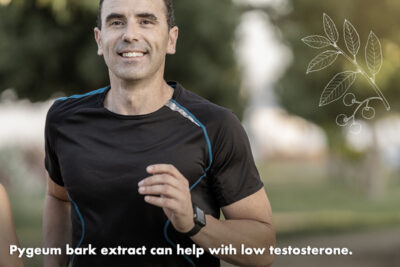 Testosterone deficiency is linked with an increase in systematic inflammation and metabolic syndrome. Therefore, low testosterone levels are associated with obesity, insulin resistance, an adverse lipid profile, and cardiovascular mortality. While male hormone balance does not get as much attention as female hormone topics, optimal hormone levels are vital to men’s well-being, and necessary for keeping inflammation under control. It is important that the root causes underlying male hormone imbalances are addressed.

Pygeum africanum is a large evergreen known as the African cherry tree, native to central and southern Africa, which grows to up to 150 feet. For thousands of years, traditional African healers have used the bark for its healing, aphrodisiac qualities and for male health. Historically, the powdered bark was made into a tea. In the 1960s, Europeans began using pygeum bark extract for a variety of men’s disorders. This ancient supplement then caught the attention of healthcare professionals and healers worldwide.

In our clinic, we find that using a blend of complementary herbs provides superior results. In addition to a high-dose of pygeum at 650mg, we see that stinging nettle root, saw palmetto, and pollen concentrate also support healthy male testosterone levels. Stinging nettle, specifically the root, modulates the effect of male sex hormone stimulation, so that androgen receptors are not over-activated. Also nettle root may help normalize testosterone levels by preventing sex hormone-binding globulin (SHBG) from attaching to cells, and by blocking DHT from binding to SHBG. In addition, nettle root polysaccharides have a good anti-inflammatory effect: they stimulate helpful T-lymphocytes, and impede HLE (human leukocyte elastase) which is one of the most destructive enzymes produced by certain white blood cells, that enters tissues to trigger the inflammatory process.

Saw palmetto encourages healthy testosterone levels. Scientists have found that saw palmetto can slow down 5-alpha reductase, and thus reduce the effects of DHT as men get older. One study found that dosing healthy males ages 37 to 70 with saw palmetto over a two-week period led to higher levels of testosterone for those men than for others in the placebo control group.3,4  As low testosterone reduces libido, it has also been shown that saw palmetto can improve sex drive by maintaining testosterone and reducing its breakdown. One study reported in the journal Urologia Internationalis found that 120 men using saw palmetto experienced improved sexual function, resulting from better testosterone levels. Pollen concentrate is a natural adaptogen that can boost testosterone production. By helping to overcome the negative effects of stress, pollen concentrate exerts an anti-inflammatory and protective effect on the body.
Recommendation: Pygeum Bark Extract 500 to 650mg daily total, standardized to at least 45% total sterols, best absorbed between meals, any time of day, or as directed by your healthcare provider.