For LOW TESTOSTERONE, green tea extract can act as an adaptogen to preserve healthy testosterone levels, and its catechins inhibit the enzyme 5-alpha reductase, resulting in a rise in circulating testosterone. Green tea is also anti-inflammatory, protecting testicular cells from damage so that they secrete testosterone more efficiently. An adaptogen is a botanical that can encourage or slow the activity of an organ or gland as needed, to maintain optimal function. For testosterone, green tea can boost output if it has dropped, and will also curb excessive levels. 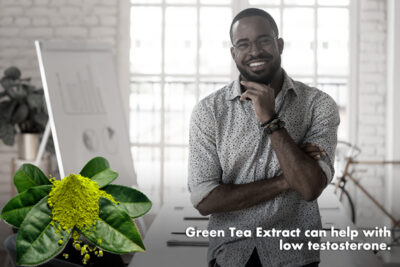 Green tea is produced from the leaves and buds of Camellia sinensis and is one of the most widely consumed beverages in the world. Green tea extracts are among the most extensively used ancient medicinal agents in traditional Chinese medicine. Green tea is extremely high in polyphenols which have impressive medicinal actions. Green tea contains polyphenols, including catechin, epicatechin, epigallocatechin gallate (EGCG), epigallocatechin-3-gallate, and proanthocyanidins, which show antioxidant action as good as or better than vitamins C or E in most studies.

Even better, in addition to its own antioxidant effects, green tea appears to stimulate the body’s own antioxidant enzymes in the liver, small intestine, and lungs. Since the liver breaks down hormones, supporting healthy liver function leads to more stable testosterone levels and better male hormonal balance. Catechins enhance the immune system, destroy certain bacteria and viruses, fight inflammation, and regulate the production and activities of hormones. Another bonus found in green tea is the bioflavonoid called quercetin which also modulates hormones. In producing green tea extracts, the plant must be lightly steamed and dried to release the therapeutic constituents: If tea leaves are allowed to oxidize, the enzymes in the resulting black tea can degrade the polyphenols. Steaming inactivates these enzymes and protects the healing antioxidants.

Testosterone deficiency is linked with an increase in systematic inflammation and metabolic syndrome. Therefore, low testosterone levels are associated with obesity, insulin resistance, an adverse lipid profile, and cardiovascular mortality. While male hormone balance does not get as much attention as female hormone topics, optimal hormone levels are vital to men’s well-being, and necessary for keeping inflammation under control. It is important that the root causes underlying male hormone imbalances are addressed.

In our clinic, we have had excellent results with a green tea concentrate providing the most potent of green tea’s medicinal compounds, epigallocatechin gallate or EGCG, present at an ideal 45% or 165mg per capsule. The total dose is usually 300-400mg per capsule that includes an additional smaller amount of whole green tea leaf. This provides the antioxidant equivalent to three cups of green tea, but without the tea’s 120mg of caffeine. We like a formula that includes the benefits of theanine, lignans, and chlorophyll with whole green tea leaf. With our patients, such a blend shows excellent benefits for testosterone support, as well as antioxidant boosting, weight balance, and seasonal affective disorder. Patients report having better stamina and often an increased sense of well-being.