LOW SPERM COUNT, zinc picolinate is an essential trace mineral for sperm development, and also sperm quantity and quality, improving motility and the number of normally formed spermatozoa. Zinc supports normal functioning of the male reproductive system, including testosterone output which then fosters healthy sperm production. In addition to being found in all organs, tissues, and fluids in the body, zinc is just behind iron in its ranking as the most abundant trace mineral in the body. Zinc is present in every cell and it is necessary for protein and DNA synthesis, and cell division. 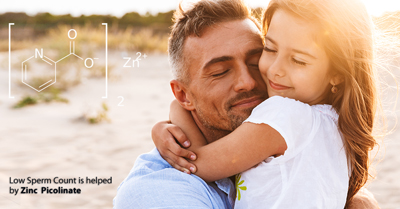 Despite having such critical functions, zinc is not stored in the body and requires regular dietary or supplemental intake. The National Institutes of Health notes that for males 14 years and older, the established U.S. RDA for zinc is a low 15mg per day, yet very few men obtain this amount.

During spermatogenesis, or sperm formation, the concentration of zinc in the testes rises, as zinc is needed for the development of sperm. An in vitro study in 2009 highlighted several important findings regarding zinc and spermatogenesis. Zinc levels in the testes increased in tandem with the progression of the sperm development, gradually rising as sperm matured. It was observed that zinc accumulates in germ cells. Germ cells are the only cells in the body that have half the amount of chromosomes, and which undergo both mitosis and meiosis in males to produce the gamete, or sperm cell. When researchers tested the necessity for zinc by creating a zinc deficiency, germ cells suffered apoptosis or cell death. However, this cell death was rescued by the addition of zinc to the cultures.

Additionally, this study investigated the effects of zinc on sperm motility: A zinc deficiency led to a suppressed rate and duration of sperm motility, the sperm swam slower and for a shorter time. In conclusion, researchers suggested that, “zinc is an essential trace element for the maintenance of germ cells, the progression spermatogenesis, and the regulation of sperm motility.”1

Zinc is one of the most important trace elements in the body with three major biological roles as catalyst, structural, and regulatory ion. As an essential catalytic cofactor for many enzymes and other proteins, and it has been known for many years that zinc reduces oxidative stress and protects tissues including the testes and their sperm-producing ability.2,3 Due to zinc’s important antioxidant role, a deficiency can increase oxidative damage to DNA, proteins, and lipids, resulting in lower quality sperm. More than 20 years ago in 1995, research investigated the effects of zinc deficiency on oxidative damage to animal testicular proteins, lipids and DNA. It was conclusively determined that adequate zinc levels are crucial for production of healthy sperm.5

Taking the long view, a detailed systematic review of multiple research studies was undertaken in 2016 to examine the relationship between seminal plasma zinc levels and male infertility, as well as the effects of zinc supplementation on sperm parameters. The meta-analysis identified 1,320 unduplicated studies and selected studies involving 2,600 infertile males and 867 normal controls. The results indicated that zinc concentrations in the semen of infertile males were significantly lower than those in normal controls. Most importantly, zinc supplementation was found to significantly increase the semen volume, sperm motility, and the percentage of normal sperm morphology.6

In our clinic, our male patients who include ample zinc in their approach to boosting sperm count, ideally in the picolinate form, regularly experience improved sperm count and improved percentages of healthy motile sperm.

Recommendations:
Zinc picolinate 30mg, one or two times daily, with any meals, or as directed by your healthcare provider.