For LOW SPERM COUNT, male fertility studies show that R-Lipoic acid protects sperm from oxidative damage, and it enhances sperm health and count. A key contributor to poor sperm health is oxidative stress: R-Lipoic acid forms a sheath around and within the vulnerable mid-section of the sperm, a barrier that can shield the sperm from free radical damage.

R-Lipoic acid improves sperm motility, including rapid forward progression and straight linear velocity. It boosts mitochondrial activity in the sperm cell, so that more energy is generated. An environment richer in R-Lipoic acid prevents sperm membrane impairment, by inhibiting peroxidation damage to membrane lipids. R-Lipoic acid reduces DNA damage, notably in sperm that undergo cryopreservation, where the freezing process can cause a dramatic reduction in their vitality. Because it is soluble in lipid and water media, R-Lipoic acid efficiently scavenges and negates free radicals. Therefore, taking R-Lipoic acid results in a greater number of live sperm, with more being healthily formed. 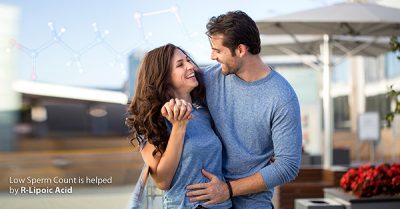 Researchers now believe that up to 80% of all cases of male infertility can be attributed to oxidative stress. Low sperm count, also called oligozoospermia, can also have other causes including: genetics, testicular failure such as undescended testicles in childhood, hormone deficiencies or imbalances, varicoceles (enlarged veins in the testicle), alcohol or drug abuse, pharmaceutical drugs, or a blockage in the duct system that carries sperm.

Oxidative stress occurs when the number of damaging free radicals present in tissues overwhelms the body’s neutralizing antioxidant mechanisms. To explain, free radicals are unstable oxygen molecules that form during normal physiological processes where oxygen splits into single atoms with unpaired electrons. Electrons like to be paired, so these free radicals scavenge the body to seek out other electrons to bond with. This attaching to electrons in tissues causes damage to cells, proteins, fats, and DNA. Unfortunately, sperm cells are particularly vulnerable to free radical injury. They have less effective antioxidant mechanisms than other cells to neutralize free radicals. Additionally, because of the high amounts of fats contained in their cell membrane, their lipids are exposed to free radical damage.

R-Lipoic acid is a sulfur-rich, vitamin-like molecule that is vital for energy production in all tissues. Lipoic can be made in two isomers, the R and S forms, but R-Lipoic acid is the only variant that exists in nature and is the sole medically effective form. R-Lipoic acid is a cofactor for ATP in the mitochondria of all cells. It is sometimes called “nature’s perfect antioxidant”: a compact molecule that easily crosses cell membranes.

R-Lipoic acid has unusually broad-ranging actions against both water-soluble and fat-soluble free radicals, both inside cells and in the supportive tissues outside. There is evidence that it can help to recycle vitamins C and E, and in addition, that it actually substitutes for their antioxidant actions. R-Lipoic acid is the only antioxidant that can regenerate protective glutathione in the body, and it is a key nutrient for safeguarding mitochondria from damage. Mitochondria naturally produce oxidant by-products as they generate energy. Without adequate antioxidants to clear oxidative waste, mitochondria age and decay faster, leading to sperm cell damage and widespread cellular decline.

Clinical studies confirm that R-Lipoic acid protects sperm survival and motility. Free radical activity was found to be responsible for a dramatic reduction in sperm quality during sperm cryopreservation, which is commonly used in assisted reproduction. Seeking to minimize this oxidative injury, researchers tested the addition of antioxidant lipoic acids to the sperm microenvironment. Lipoic acids were selected for their efficient and wide-ranging free radical scavenging properties. The findings confirmed that sperm motility and viability was improved, DNA damage was minimized, and lipoic acid had a cryoprotectant effect helping to maintain healthy sperm counts.1

Lipoic acid has also been studied for its effective protection against reproductive injury caused by a widely used anthracycline antibiotic. Researchers observed that administering lipoic acid just one day prior to the antibiotic shielded sperm from damage and maintained near normal spermatogenesis.4

In a 2015 triple-blind, placebo-controlled study in Iran, three months of taking lipoic acid boosted sperm count for infertile men. Researchers evaluated the effects of lipoic acid supplementation on seminal oxidative stress and resulting sperm levels. Forty-four men received either 600mg of lipoic acid or placebo for twelve weeks. At the end of the study, the lipoic acid group had significantly increased total sperm count, sperm concentration, and motility levels compared with their baseline values at the start of the study, and in comparison to the control group.5

Clinically, our male patients have seen good results with higher sperm counts, fewer flawed sperm, and improved pregnancy rates with their partners over time, using a high potency of 400 to 600mg daily of R-Lipoic acid in a cellulose plant base.

Recommendations: R-Lipoic Acid (ideally as Sodium R-Lipoic Acid) 400mg once daily, with or between meals, or as directed by your healthcare provider.