For LOW SPERM COUNT, the amino acid L-arginine is necessary to produce sperm, and so enhances sperm count, quality, and male fertility. L-arginine is very important for many processes in the testicles and it can have a positive impact on the quantity, strength, and mobility of sperm. This is confirmed by multiple studies showing the benefits from supplementation. 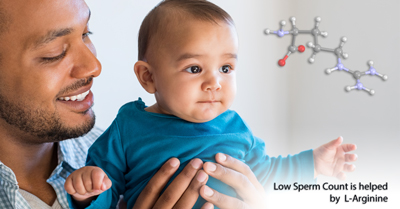 L-arginine is a semi-essential amino acid, meaning that it can be produced by the body but its production depends on many different factors such as age, mental or physical stress. A number of health situations require higher amounts, so L-arginine can be classified as a conditionally essential amino acid, depending on the developmental stage and health status of the individual. Though adult bodies make some arginine, and small amounts are found in nuts, seeds, and legumes, it needs to be consumed through supplementation to reach adequate levels to benefit male sexual functions. L-arginine was first isolated from a lupin plant seedling extract in 1886 by the Swiss chemist Ernst Schulze.

As one most metabolically versatile amino acids, L-arginine serves as a precursor for the synthesis of urea, nitric oxide, polyamines, proline, glutamate, creatine, and agmatine. Partly due to its protein building ability, L-arginine can cross the blood-brain barrier and reach the hypothalamus – something that many other medications and supplements cannot do.

L-arginine has several mechanisms by which it enhances healthy sperm count:

In the testicles, arginine produces spermin, a polyamine generated to stabilize and preserve human DNA. Spermin ensures the mobility of the sperm and plays an important role in cell division itself. In the 1970s, researchers were able to prove that the supplementation of arginine can boost poor sperm counts. An earlier study had previously shown that an arginine-free diet of even a few days resulted in impaired spermatogenesis in previously normal individuals. A research trial followed up and treated 141 males suffering from primary sterility who were oligospermic, producing inadequate amounts of sperm, with 4 to 8 grams per day of arginine. Researchers discovered that the average ejaculate volume was significantly increased with L-arginine.1

For low sperm count, L-arginine is frequently effective for raising a count that starts with at least 20 million per ml. An optimal count would be 50 to 60 million. Arginine is essential for new cell production; it triggers the body to make protein, which is part of its mechanism for benefiting sperm production. We know that stress can reduce arginine levels in sperm development pathways. In the most promising study, 74% of men taking L-arginine for sufficient time had significantly improved sperm count and motility. Additional placebo-controlled trials found that L-arginine increased ejaculate volume, the number of sperm, and the percentage of healthy potent sperm with good motility.2

In a 1994 study, sperm motility was shown to increase in forty men experiencing decreased motility that was not due to infection or to an immunological disorder. Treated over six months with a daily dose of 1,000mg. of L-arginine, patients experienced improved motility of spermatozoa without any side-effects.3

A team of scientists in Turkey gave fifteen men with a low sperm counts high doses of arginine over three months. It was found that the test subjects had significantly improved sperm quality and subsequently 20% of the subjects conceived children with their partner.4

Indirectly, arginine also leads to a better chance of pregnancy due to its strengthening of erections. Arginine accomplishes this because it is an immediate precursor, or building block, for the body to make nitric oxide, which encourages blood vessels to open wider, improving blood flow. Studies reveal that nitric oxide mediates penile erection: The inner cells that form the lining of blood vessels, the endothelium, send nitric oxide as a signaling compound to the surrounding smooth muscle of the vessels. This smooth muscle relaxes, the vessels open up, which is vasodilation, and blood flow into the penis increases.5,6 Sildenafil citrate, or Viagra, stimulates erections by enhancing nitric oxide signaling in the penile blood vessels.

To be effective, L-arginine needs to be taken consistently for at least three months. For our patients, L-arginine has produced excellent results for male patients’ sperm counts, when taken for 3 to 6 months or longer. Each nitric acid molecule produced by the body or from supplemental L-arginine is rapidly metabolized so blood levels drop fast. We recommend a sustained-release L-arginine preparation, in a base of slow-release methylcellulose, to maintain ample tissue levels of L-arginine over 24 hours with just 500mg two times daily.

Recommendation: L-arginine in a base of slow-release methylcellulose, 500mg two times daily, with or between meals; or as directed by your healthcare provider.