For LOW LIBIDO, the vitamin E family is a key player in increasing a man’s interest in connecting sexually, and his ability to become aroused and enjoy sex. It has powerful antioxidant and testosterone-protective effects that are vital to improving a man’s sex drive. The vitamin E family is crucial for production of the sex hormones which offer a needed boost to libido; it has been shown to improve libido by increasing circulating testosterone in a man’s body. 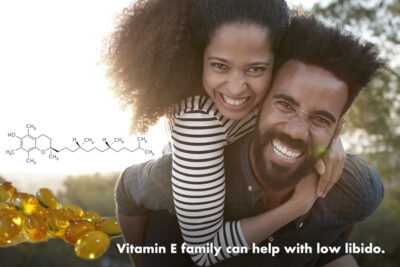 Sexual arousal is a result of complex interaction between multiple systems including the nervous system, muscles, hormones, and emotions. Vitamin E promotes the creation of substances called prostaglandins, as well as testosterone, which all promote good blood flow to pelvic organs and the brain, and are important to a vibrant sex drive.

The vitamin E family is made up of eight major related substances that work together in nature to enhance each other’s actions. They fall into two chemically related categories known as tocopherols and tocotrienols. These constituents of the Vitamin E family are: alpha, beta, gamma, alpha, beta, and delta tocopherols; and alpha, beta, gamma, alpha, beta, and delta tocotrienols. We know that the eight forms of vitamin E need each other to work effectively, and their bioavailability to the body is greater if all of them are consumed together. This naturally occurring family of mixed tocopherols and tocotrienols increases blood circulation, and helps raise levels of testosterone which is essential for sexual stamina and sexual interest.

Vitamin E has numerous benefits for male libido and for blood flow disorders, although it is highly dependent on the type and form of Vitamin E that is consumed. The natural tocopherols have documented health benefits as antioxidants, hormone modulators and immune supporters. In addition, research shows that alpha, beta, gamma, and delta tocotrienols bring their own men’s health, hormone balancing, and nerve benefits important for a healthy sex life that tocopherols lack. Reports that described little effect from vitamin E generally used only the d-l synthetic inactive form or used just alpha-tocopherol, which has minimal action on its own without the synergistic presence of the other tocopherols and tocotrienols. When taking a vitamin E supplement, men will receive vastly more benefit from a formula including both alpha- and gamma-tocopherol, along with the other tocopherols and all the tocotrienols, which all work synergistically together. We stringently avoid the d-l-alpha synthetic versions, these never exist in nature and their safety is questionable.

We can look to scientific literature to provide ample evidence of vitamin E’s ability to increase libido and support levels of testosterone. The University of Maryland Medical Center recommends taking 400IU per day of vitamin E to prevent or treat depressed sex drive or other types of sexual dysfunction, especially if resulting from hormonal imbalances.1

An early Japanese study found that male mammals who were deficient in vitamin E had lower levels of luteinizing hormone (LH) and follicle-stimulating hormone (FSH). These master hormones are made by the pituitary gland in a man’s brain, and they oversee sexual organ function. FSH effects levels of testosterone and influences libido, and it controls the production of sperm; a man’s FSH levels are a gauge of fertility. By contrast, males receiving vitamin E supplementation had significantly higher levels of LH and FSH, as well as higher levels of testosterone in their testicular tissue and blood plasma, and thus greater sexual interest.2

Another research study in South Africa sought to clarify the effect of vitamin E supplementation on male libido and reproductive capacity. The conclusions found that supplemental vitamin E optimized libido, and in addition improved spermatogenesis and semen quality.3

The vitamin E family also has antioxidant properties that protect testosterone molecules from damage by inhibiting the oxidation of polyunsaturated fatty acids (PUFA). The tissue of the penis is vulnerable to oxidative injury, and vitamin E has a protective action. Researchers determined that since harmful oxidative byproducts accumulate in erectile tissue, vitamin E is critical for preventing oxidation of polyunsaturated fats in penile tissues. In both these ways the vitamin E family supports sex drive, by its antioxidant protective effect that shields testosterone molecules and the penis itself from oxidative injury.4

Male patients in our clinic taking the mixed natural vitamin E family tell us that they experience more sexually orientated thoughts and increased frequency of initiating and enjoying sex. The effect builds gradually over 3 to 6 months.