Low Libido is helped by L-Carnitine

For LOW LIBIDO, the amino acid L-carnitine has major benefits for sexual arousal and men’s health, as it offers potent benefits for energy generation and testosterone production, and helps to improve pelvic blood flow. An inevitable consequence of aging is a decline in cellular energy levels, slowing the metabolic rate, which can manifest as loss of libido and a sense of overall fatigue or depression. In the human body, carnitine fuels the fires of energy production at the cellular level. Science is now showing a decline in L-carnitine levels with age that parallels declines in testosterone output. 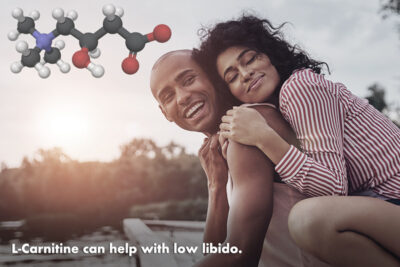 L-carnitine is an amino acid that is naturally produced in the body. The body uses amino acids as building blocks to make proteins. This particular amino acid is critical to providing the mitochondria of each cell with the fatty acids needed to fuel the cell’s energy producing reactions.

For low libido, research suggests L-carnitine has the following mechanisms of action:

We can get small amounts of L-carnitine from our diets by eating meat and fish, but not enough for a therapeutic effect on male sexual functions. Vegetarians and vegans can especially benefit from L-carnitine supplements, as can older adults, as carnitine levels in the body decline as men age. Preliminary research also suggests that L-carnitine encourages a healthy libido by supporting optimal testosterone production and improving testicular function, leading to livelier sexual desire and interest.

Carnitine supplements can enhance libido and erections as well or better, and more safely, than testosterone, according to a 2004 Italian trial: Researchers compared carnitine and testosterone therapy in men who had low libido, fatigue, and depression. A total of 120 patients were randomized into three groups. One group of subjects received 2,000 to 4,000 mg/day of mixed carnitine; another was given testosterone therapy; and the last group received a placebo. After tracking the men for six months, carnitine was found to be more effective for improving libido and sexual performance than testosterone, though the hormone helped somewhat. Carnitine proved significantly better than testosterone in improving nocturnal penile tumescence and International Index of Erectile Function score. More importantly, carnitine did not cause an increase in prostate volume and size, while testosterone did have that side-effect. Interestingly, both testosterone and carnitine also yielded equal improvements in mood and energy.1

The results of a 2012 study highlighted the fact that the use of nutraceuticals for male sexual function deserves much more exploration. Researchers selected 54 men presenting with diminished libido and erectile dysfunction to evaluate the effects of a 3-month supplementation with carnitine, enhanced by other supportive nutrients, on their frequency and intensity of sexual desire and their performance. Analyses revealed that treatment with carnitine led to improved erections in 40% of cases, with a partial response occurring in up to 77% of subjects enrolled, along with increased desire for physical intimacy. These findings indicate that the favorable hormone-balancing and cardiovascular effects of carnitine and other nutraceuticals can result in improved male arousal and sexual function.5

In our clinic, our male patients taking L-carnitine have seen steady long-term improvements in libido. These men report improved interest in sex, feeling aroused more readily, and increased desire for intimate sexual connection with loved ones. The benefits of L-carnitine appear to gradually build up over 3 to 6 months, and then continue.

Recommendation: L-carnitine 1,000mg per day, with any meals, or as directed by your healthcare provider.