Low Libido is helped by Ginkgo Extract with whole leaf

For LOW LIBIDO, ginkgo extract with whole leaf has a key role in improving sexual interest for men, by enhancing brain neurotransmitters that stimulate libido, and by increasing pelvic blood flow. Its other actions include increasing brain blood flow, which in itself can support healthy libido, and also calming anxiety which could dampen arousal. Ginkgo also promotes dopamine secretion which inspires sexual arousal. Most researchers endorse the hypothesis that dopamine has a crucial excitatory role in sexual arousal in males, while serotonin has a dampening effect on desire.1,2 Five distinct neurochemical transmitters systems influence a man’s libido, and they work together to increase or calm it: for increasing libido. These are transmitters include norepinephrine, dopamine, serotonin, acetylcholine, and histamine. 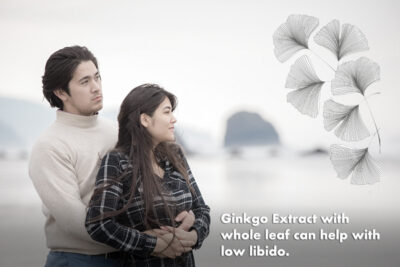 Dopamine is a neurotransmitter that the brain produces to increase focus and motivation. Symptoms of low dopamine levels include loss of pleasure in things that were once found to be enjoyable, lack of motivation and apathy. Because it is linked to so many aspects of human behavior including: anticipatory pleasure, attention, memory, mood, learning, sleep, pleasure-seeking and addictions, dopamine is one of the most extensively studied neurotransmitters.

Dopamine is widespread in the animal kingdom, but the particularly high levels in humans may be responsible for what makes us … human. Lack of energy, poor circulation, and a busy, stressful lifestyle can contribute to waning sexual desire. Gingko can help to increase dopamine levels naturally, leading to improved desire and focus on sex. Dopamine transmission in the prefrontal cortex, the region of the brain responsible for considering sex, and for language, thinking, decision making, and planning, is enhanced by ginkgo’s action.

It appears that ginkgo’s blood-flow boosting effect on the brain contributes to its efficacy for increasing libido. Although there have been many studies surrounding ginkgo and cognition, researchers in Germany set out to study the effects of ginkgo on mood in healthy adults. This randomized, double-blind trial worked with 66 volunteers for four weeks. One group was given a placebo, and the other group took 240mg of ginkgo biloba extract daily. Those taking ginkgo saw significant improvements in their “self-perceived” mental health and quality of life, and reported a significant improvement in libido and mood compared to those in the placebo group.3

Ginkgo extract has even been used clinically to offset the sexual dysfunction induced by antidepressant medications. Studies have found ginkgo to be effective for helping libido and erectile function in up to 76% of men taking antidepressant medicines. Antidepressants known as Selective Serotonin Reuptake Inhibitors (SSRIs) can inhibit neurotransmitters involved with initiating erections, and also inhibit the release of nitric oxide which is needed in penile erectile tissue to produce a physical erection. Antidepressants inhibit the enzyme nitric oxide synthase, and ginkgo can reverse this inhibition, allowing more successful erections. Ginkgo enhances the effects of nitric oxide, which helps relax artery walls and smooth muscle tissue and therefore facilitates blood flow to the penis, and it mediates penile erection. Nitric oxide is released during neurotransmission and from the endothelium lining blood vessels in the penis. Studies have shown that ginkgo improved penile blood supply by ultrasound within weeks, and half the men studied regained potency after six months on ginkgo.5

Improved confidence in his potency boosts a man’s libido and interest in sexual activity.4 Gingko also enhances libido by helping to reduce performance anxiety, because it increases blood flow to the sexual organs, and supports healthy erectile function.

Herbal medicine long has been used in the management of sexual dysfunction. In traditional Chinese medicine, ginkgo seeds were used to open “channels” of energy to different organ systems. Gingko’s ability to increase blood flow to various parts of the body may be the origin of many of its benefits. Many patients have given feedback about the efficacy of ginkgo for libido and increasing sexual interest and desire. However, more randomized controlled trials on humans need to be done. One study treated 60 male patients with a 60 mg extract of Ginkgo biloba for 12 to 18 months. Ultrasound imaging detected improved pelvic blood perfusion in as little as 6 to 8 weeks in some men. After 6 months, half of the men regained erectile function and reported improvements in libido.6

Ginkgo biloba, or maidenhair, is a beautiful tree with fan-shaped green leaves. As the only surviving member of an ancient order of plants and one of the oldest living tree species on Earth, it’s often referred to as a living fossil. It was first used medicinally in China around 2,800 B.C. as a brain tonic. While its leaves and seeds are used in traditional Chinese medicine, modern research primarily focuses on ginkgo extract, which is made from the leaves. Although scientists have found more than 40 components in ginkgo, its plant-based antioxidants–or flavonoids–and terpenoids are the two believed to have a medicinal effect.

In our clinic, we prefer a ginkgo standardized extract with guaranteed doses of the active constituents that also contains whole ginkgo leaf. This is because the whole plant provides extra synergistic compounds that magnify the benefits of the main medicinal ingredients. Our male patients working on enhancing their libidos have reported improved ability to achieve sexual arousal, as well as mental focus and energy, after consistently taking a standardized ginkgo extract. In order to get maximum benefit, studies show that ginkgo should be taken for at least 6-12 weeks to exert its full effects.

Recommendation:
Ginkgo biloba 80mg, ideally with 24% flavone glycosides, 6% terpene lactones, and including some ginkgo whole leaf for trace nutrients, 2 to 3 doses daily, best between meals; or as directed by your healthcare provider.